Phil Hogan resigns from role as EU Commissioner for Trade

Phil Hogan has submitted his resignation letter for his role as European Commissioner for Trade in the wake of Ireland's "Golfgate" scandal that erupted last week. 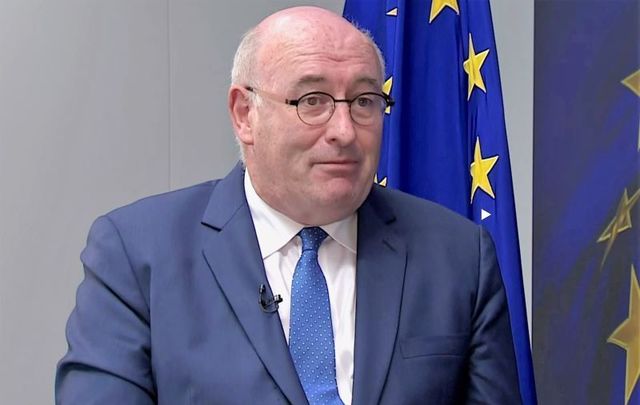 Phil Hogan during his interview with RTE News on Tuesday, August 25, 2020. RollingNews.ie

Phil Hogan has resigned from his role as European Union Commissioner for Trade.

Hogan wrote in part: "It was becoming increasingly clear that the controversy concerning my recent visit to Ireland was becoming a distraction from my work as an EU Commissioner and would undermine my work in the key months ahead."

Hogan soon thereafter spoke with RTÉ News regarding his resignation:

Earlier: The anticipated resignation comes after Hogan's involvement with the “Golfgate” scandal that erupted in Ireland late last week.

Several sources, including the Irish Examiner, who broke the Golfgate story last week, the Irish Times, and the Irish Independent, and more are reporting that Hogan is expected to tender his resignation letter tonight, August 26.

On August 19, more than 80 people, including Hogan, attended the Oireachtas Golf Society event that was hosted at the Station House Hotel in Clifden, Co Galway. The event was held the day after Taoiseach Micheál Martin announced the “significant tightening” of coronavirus restrictions for the entire country, which said in part that “no formal or informal events or parties should be organised” at hotels.

While many politicians who attended the event were quick to issue apologies and or resign after the story was broken by the Irish Examiner on Thursday evening, Hogan was comparatively delayed.

He first issued a clarification of his attendance at the event in a string of tweets on August 21.

It was Sunday before he issued an apology, which he also shared on Twitter.

The apology came after Taoiseach Micheál Martin and Tanaiste Leo Varadkar reportedly asked Hogan to “consider” his role within the EU Commission.

Ursula von der Leyen, the president of the EU Commission, requested that Hogan submit an outline of his movements in Ireland, where he visited between July 31 and August 22. Hogan published the official memorandum on Tuesday, August 25.

That same day, he appeared in an RTÉ News interview with reporter Tony Connelly. During the interview, Hogan again apologized for attending the event, a move he called “a big mistake,” but he insisted that he put nobody at risk after testing negative for COVID-19.

EU Commissioner Phil Hogan speaks to @tconnellyRTE about the controversy surrounding the golf dinner in Clifden, and the fallout | More: https://t.co/RE6IbDVbN0 https://t.co/yyEHWFxo75

On Tuesday evening after the interview aired on RTÉ, the leaders of the Irish government said in a statement: “The Taoiseach, Tánaiste, and Minister Ryan acknowledge Commissioner Phil Hogan’s recent written and public account of his movements when he traveled to Ireland. They also welcome his apology.

“It is clear that breaches of public health guidelines were made by Commissioner Phil Hogan since he traveled to Ireland.

“The government guidelines clearly required him to restrict his movements for 14 days. He should also have limited his movements to and from Kildare for essential travel only, and he should not have attended the Oireachtas Golf Society dinner.

“People are correctly angered by these actions given the sacrifices so many have made to adhere to public health guidance.

“In addition, his delayed and hesitant release of information has undermined public confidence.

"Commissioner Hogan is accountable to the President of the Commission Ms. Ursula von der Leyen, under the legal framework outlined in the Treaties.

“The government now awaits the outcome of the review being undertaken by the President.

Ultimately the Commissioner is accountable to the EU Commission, not to the Irish government or to the Oireachtas.”

On Wednesday, a spokesperson for President von der Leyen said: “The President is studying carefully the report that was submitted by Commissioner Hogan yesterday.

“The President is in contact with Commissioner Hogan about it. On the other hand, we have taken note of the statement by Irish authorities.

“I can tell you she is committed to making an assessment that is comprehensive and fair.

“She will be ready to complete her assessment when she feels she has the full picture over this matter.”