Coveney stands behind figure of 50k Irish undocumented in US

Irish government says it will commit to finding a solution for the undocumented Irish here no matter how many there are. 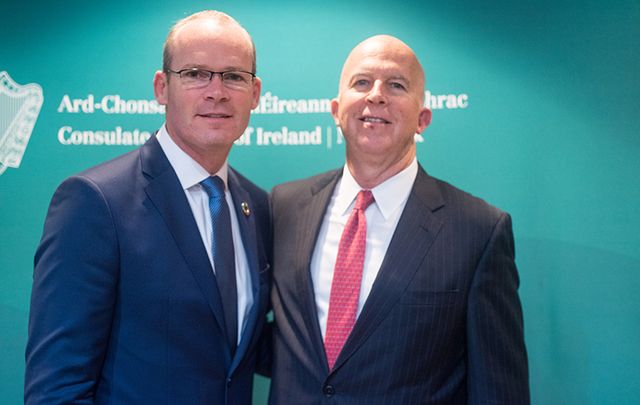 How many undocumented Irish are there in the United States?  That’s a question the Irish government cannot answer for sure, but Irish Foreign Minister Simon Coveney is certain the number is far closer to the years-old 50,000 estimate than the newer figure of 10,000 put forth by his colleague, TD John Deasy, after a fact-finding mission to Washington, D.C. and New York in August.

Coveney was in New York last week with Diaspora Minister Ciaran Cannon to deliver Ireland’s annual speech in front of the UN General Assembly, and to meet with local Irish community and business groups. During a press briefing with the Irish Voice and Irish Echo at Fitzpatrick’s Grand Central Hotel last Friday, Coveney made it clear that the Irish government will continue to commit to finding a solution for the undocumented Irish here no matter how many there are – but that Deasy’s 10,000 number is way off the mark.

“No, that’s not an official figure,” Coveney said.  “John is doing important work trying to find a way of advancing the interests and responding to the hugely important concerns of Irish people that are here undocumented … I had meetings this week with various Irish centers and they would contend the [10,000 figure] is very different.

“If you speak to the Irish centers, they would say that even in the broader New York region, down to Philadelphia, there could be 10,000 to 15,000 undocumented in this part alone. And they are the people that are living and working in communities and speaking to people who are undocumented.”

Coveney said the government is satisfied that the 10,000 Deasy estimate is too low.  He stressed that Deasy, who was appointed as special envoy for the undocumented by Taoiseach Leo Varadkar earlier this summer, and the Irish Department of Foreign Affairs would work together to secure legal status for however many are here.

“So I think it’s important for us not to be falling out over an exact number, and instead trying to find solutions to whatever number there is.  I have been to Washington many times [to talk] on this issue, and we’ve always worked off a figure of 40,000 to 50,000 people,” he said.

Coveney said the government remains comfortable using that range and will continue to do so.

“I’m certainly not going to revise that figure and start talking about an official figure that’s an awful lot less than that without having more reassurance than we have to date,” he added.

Deasy, a TD from Waterford, worked with a senior demographer from the Pew Research Center in Washington, D.C. who he met with in August in an effort to find a more precise number for the Irish undocumented here.   He also used migration figures from Ireland’s Central Statistics Office, and met with Irish immigrant groups in New York during his visits here.  Deasy was in Washington earlier this month, and is expected to make regular trips in his new role.

Irish envoy for the undocumented in Washington DC, John Deasy.

“John is a friend of mine. He is serious about trying to help with this problem. He has worked in Washington before and feels he can be persuasive. It’s great that he wants to focus on it to the extent he does. So we’ll be working together,” Coveney said.

Coveney says he does not want to “over-promise” the Irish undocumented that their status will be regularized because of too many dashed hopes in the past.

“I know that many undocumented feel more threatened now perhaps than at any time in the recent past…I want to reassure people that it is a huge priority for us,” he said.

“When and if there is cause to raise expectations I would be delighted to do that, but I think it’s important for us to not raise hopes in a way that is false, but in some ways to under-promise and over-deliver on the issue.”

Coveney also discussed the planned referendum next year that, if passed, would allow Irish citizens living abroad to vote in presidential elections.  The government, he said, will work to ensure its success, which would allow the mandate of the Irish presidency to become more global.

“I don’t want anybody who is Irish and who wants to vote in a presidential election to be excluded,” Coveney said.  “I don’t want to have any 10 year rules or 20 year rules since your left Ireland, or having to be born in Ireland, but I think we are looking at ways there would be some evidence of continued connectivity with home.”

Coveney says that extending the right to vote in Irish presidential elections would be “massively positive, to try and draw together through a presidential election an electorate that is essentially representative of Irish nationals all over the world…I think that will be a very positive thing.”

The government is working on a strategy for passing the referendum.  Should the Irish electorate approve it, the first votes from abroad wouldn’t be cast until 2025, as time wouldn’t permit participation in next year’s presidential election.

“We need to make sure it does pass. We need a proposition that is persuasive, easy to understand and easy to sell,” Coveney said.

“If the referendum wasn’t to pass it would be a really desperate signal to Irish people living all over the world.”