Foreign Affairs Minister and Minister of State for the Diaspora begin an intensive program of engagements in New York this week. 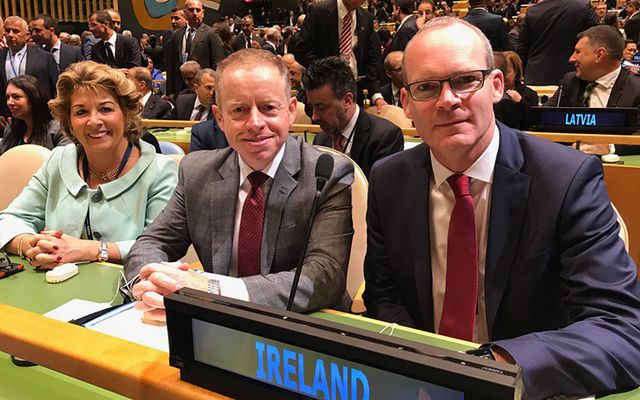 Ireland’s Ambassador to the UN Geraldine Byrne Nason, Minister Cannon and Minister Coveney at the UN on Tuesday.

Irish Minister for Foreign Affairs Simon Coveney and the Minister of State for the Diaspora Ciaran Cannon began an intensive program of engagements in New York on Monday.

Coveney’s schedule will see him undertake a wide range of meetings with foreign ministers, as well as participate in an IDA (Ireland's inward investment promotion agency) event and engage with the local Irish community here.

Coveney began his visit to New York on Monday by attending a meeting on reform of the United Nations which is being hosted by President Trump. Later over lunch he met with supporters of the Ireland Funds.

Speaking ahead of his departure for the UN, Coveney said, “The UN lies at the heart of Ireland’s foreign policy and it has done so for more than six decades. We see very clearly the advantages of a rules-based order in international affairs which the UN provides for. It is in our interests to pursue an active foreign policy because Ireland is a small, outward looking country which is heavily dependent on external trade for our well-being.”

“We have kept faith with the UN since we joined in 1955 and I believe that the case for multilateralism remains compelling, especially at this time of international uncertainty. Global problems are often becoming local problems, and the interconnections between climate change, migration, conflict and poverty are clear to see and affect us all – wherever we are situated in the world.”

“We are a committed member of the UN and we continue to make our mark on human rights, disarmament, sustainable development and peacekeeping. Our contribution to peacekeeping has been long and sustained. Irish troops have given unbroken service to the UN since 1958 and today we are the EU’s largest per capita contributor to UN peacekeeping operations.”

On Wednesday Coveney signed the Treaty on the Prohibition of Nuclear Weapons (TPNW) which was adopted in July.  Ireland, as one of the Core Group which put forward the UN Resolution which led to the adoption of the treaty, and was among the first states to sign it.

Honoured to be signing on behalf of Ireland this morning at the UN General Assembly pic.twitter.com/4uElDVHky0

Coveney’s program will also include intensive meetings with senior U.S. officials and will also include a number of Irish American community events, including meetings with Irish community and business leaders. It is understood he will brief them on recent political developments in Northern Ireland and the implications for Ireland of Brexit, the UK decision to leave the EU.