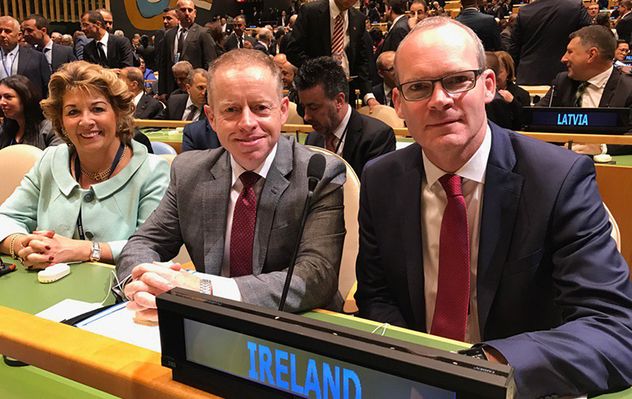 The Minister for Foreign Affairs and Trade, Simon Coveney addressed the 72nd Session of the UN General Assembly in New York on Saturday (Sept 23), the culmination of a weeklong series of engagements with leaders and foreign ministers from around the world. Prior to his speech the Minister met with the UN Secretary General Antonio Guterres.

In his address to the 72nd UN General Assembly, Minister Coveney focused on the importance of the multilateral rules based system, and Ireland’s priorities in contributing to the work of the UN. He stressed that the challenges facing countries today can only be overcome if we work together, stating:

“The case for international cooperation and multi-lateralism is compelling, and not only because the alternatives would leave us collectively and individually weaker. By working together we lay foundations of trust, we align our perspectives more closely, we accept our differences more willingly and we build habits of cooperation that better allow us to address the common threats and opportunities we face”

“We are living in an era where local and global challenges are intersecting with increasing frequency and force. Today’s problems do not carry passports or recognize international borders. There are no unilateral solutions to these problems. Local and regional issues - climate change, migration, armed conflict and hunger – often become global issues, including in corners of the world that are far from the origin of the problems. We cannot ignore them”

"Ireland is proud to be a candidate for a seat on the UN Security Council in the elections to be held in 2020" Minister Coveney at #UNGA pic.twitter.com/2hxnDVdgAO

“Ireland’s contribution to the UN in the fields of sustainable development, humanitarian assistance, disarmament, human rights and the rule of law has been steadfast. UN membership has been, and will continue to be, at the very heart of Irish foreign policy”

Expressing Ireland’s appreciation for the leadership of Secretary General Guterres, Minister Coveney noted that the UN must be equipped to deal with the challenges of today, and that Ireland will support reform efforts to make the UN more effective and representative.

“Having played an important role in facilitating agreement on the SDGs in 2015, Ireland is committed to their implementation, domestically and through our foreign policy”

The Minister also outlined priority areas for Ireland, where we have had significant impact at the UN. These include peacekeeping, conflict prevention, disarmament, overseas development and humanitarian assistance:

“No part of our contribution to the UN resonates more with the Irish people than our UN peacekeepers. The thousands of men and women who have served under blue helmets represent Ireland, our people and our values. Since 1958, when Irish troops first began serving the UN, not a day has passed without Irish participation in the UN’s peace support operations. We believe we make a difference”

“Today, with almost 550 troops in the field, Ireland is the highest per capita European Union contributor of troops to UN peacekeeping with deployments to six UN missions across the Middle East and Africa. We are making a substantial contribution to UNIFIL in particular, where, as always, our peacekeepers act with impartiality and integrity, and provide the leadership required in a difficult environment”

“We strongly support the Secretary-General’s efforts to re-orient the international community’s thinking toward crisis and conflict prevention. Flowing from our painstaking conflict resolution efforts on the island of Ireland, we seek to share our national experience in our work on conflict prevention, mediation and state-building”

“Earlier this week I was very pleased to sign the recently approved Treaty on the Prohibition of Nuclear Weapons which was supported by 122 members of this Assembly. Ireland is proud to have played a leadership role together with Austria, Brazil, Mexico, Nigeria, and South Africa, in bringing forward the UN Resolution convening the Diplomatic Conference that negotiated this ground-breaking treaty”

“The scale and severity of humanitarian crises is one of the greatest challenges facing the international community. Ireland is committed to providing humanitarian assistance and contributing to international efforts to ease the plight of civilians caught in conflicts in South Sudan, Syria, Yemen and Iraq to name but a few”

“Ireland is proud of its strong and targeted contribution to eradicating global hunger, reducing extreme poverty, addressing conflict and instability and responding to humanitarian crises where they occur. For Ireland, strong partnerships, especially with Least Developed Countries, will remain at the core of our approach as we together work for a peaceful and prosperous future”

The Minister’s speech also referred to the priority Ireland places on engagement with the Middle East and Africa, and the importance of engaging youth across the globe. In condemning the recent series of missile and nuclear weapons testing by the Democratic People’s Republic of Korea, Minister Coveney stressed that the case for the complete elimination of nuclear weapons has never been stronger.

In closing, Minister Coveney emphasized the values and principles which Ireland would bring, should UN member states entrust us with membership of the Security Council in 2020.