Brexit nightmare begins with no possible upside for Ireland

Dealing with the fallout from Brexit will be the biggest challenge Ireland has faced since the foundation of the state... Anybody who suggests this is opportunity for us is simply not living in the real world. 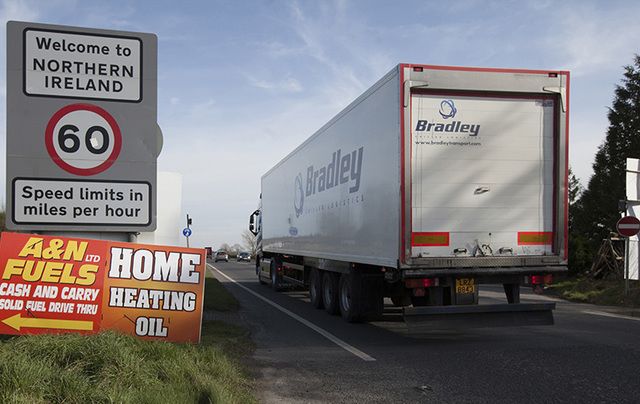 Last week the British Prime Minister Theresa May finally triggered Article 50, the legal move that starts the two-year Brexit process. And Brexit, shorthand for Britain's exit from the European Union, can only have two outcomes for Ireland, extremely bad or even worse. There is no possible upside for us.

Despite the reassuring words from May last week about recognizing the unique difficulties that Ireland will face, the truth is that Brexit marks the beginning of a nightmare scenario for this country. No other EU country will be impacted so badly.  No other EU country is as dependent on trade with Britain as Ireland. In addition to that we have the problem of a potential reinstatement of a hard border with Northern Ireland and the difficulty of maintaining the Common Travel Area between Ireland and Britain.

Despite the words of reassurance for Ireland last week, the potential for disaster emerged quickly when May's Brexit letter was delivered to the president of the European Council Donald Tusk.

Both May's letter and Tusk's statement in reply included a few sentences aimed at mollifying Ireland.  No doubt these were sincere, particularly about protecting peace in Northern Ireland, but words are cheap.

The reality is that when the hard bargaining starts between Britain and the EU, the special requirements of Ireland are unlikely to remain a priority.  In fact, it's far more likely they will be overlooked in the horse trading that will ensue between the major players as they negotiate their way through a maze of complex issues and competing trade agendas.

Even last week, when both sides were doing their best to be polite and reasonable, the suppressed enmity on the EU side was palpable. Clearly the big EU member states like France are determined that Britain will be punished for leaving, or at least not end up better off in any way.

May gave an initial indication of a hard line negotiating stance by hinting that Britain's full security cooperation with the EU might be in doubt in the future.  In return, the EU raised the status of the British enclave in Gibraltar as something that might have to be included in negotiations. This led to angry headlines in Europe about British irresponsibility and about the inflated opinion Britain has of its own importance.

In Britain, there were screaming headlines comparing Gibraltar to the Falklands and urging May to be like Thatcher and send in the Royal Navy. And this was just week one, before the two-year negotiations have even started!

If things are going to get down and dirty as fast as that, who can have any confidence that Ireland's Brexit difficulties will get much consideration when the going gets tough over the next two years? This is the hard reality we face.

The "quiet diplomacy" carried out by the Irish government in recent months may not mean very much in the end, despite Taoiseach Enda Kenny’s attempt to give the impression that everything is under control and that both Britain and the rest of Europe understands the predicament we face and is sympathetic to us.  Good luck with that!

The main point made in Tusk's response last week was that the EU would be negotiating as a unit with Britain.  There will be no side deals between individual countries and Britain.  A common EU position on Brexit will be agreed by the end of this month by all 27 countries -- including Ireland -- and this will be the basis for the negotiations with the British. Kenny has been attempting to portray this as a positive and a strength.  The argument is that by standing together the EU countries can do much more than individually.  And of course, a united stance is essential if further erosion of the union is to be avoided after Brexit. But one must wonder how sensible this is for Ireland.  What is at stake for us dwarfs the potential damage and difficulty that Brexit poses for any other EU country.

Yet we will be just one of 27 equal voices when it comes to doing the Brexit deal, with no more weight than other member countries like Bulgaria or Latvia or Poland. The Polish position, for example, will be particularly interesting.  There are nearly 400,000 Irish-born people living in Britain, but there are now nearly a million Poles who send back around £1 billion in remittances a year.

Poland, like Ireland, is also an agricultural country.  Any special deals that Ireland gets will be of special interest to Poland. But the same will apply to many other EU member countries -- even the big guns like Germany and France -- who all have their own trading interests to protect. In comparison with other countries, however, the potential impact of Brexit on Ireland is uniquely threatening and multi-faceted.

There is the border, the North, free movement, and our economic dependence in many business sectors, not just farm produce.  This column no doubt will be looking at all these areas in the months to come, as the bargaining begins. But as an example of what lies ahead let us have a quick look this week at agriculture, which is still a huge part of the Irish economy.

Half of Ireland's beef exports, worth €2 billion euro a year, goes to Britain.  More than 80 percent of all the cheddar cheese eaten in Britain comes from Ireland, with the British also big consumers of other Irish dairy products like butter. If we lose our market share in Britain in beef and dairy produce it will be a disaster not only for farming here, but for all the processing jobs here that are involved.

It is important to remember that access for our farm produce to the British market in future will depend on what the EU 27 can agree with Britain in the negotiations and that the same access will have to be available to all EU countries.

EU rules mean there can be no special deal for Ireland; we will have the same access as Belgium or Bulgaria or Greece, or anyone else. Let us assume that Britain will be leaving the EU Customs Union, which applies the same tariffs to goods entering all EU countries from the rest of the world.  Although May has yet to confirm this, it seems virtually certain since Britain wants to negotiate new trade deals with other countries like the U.S., India, China, Australia, South America, etc.

At the moment, agricultural produce entering the EU (including Britain) from other countries faces heavy tariffs, mainly to protect European farmers.  It's a complicated area with up to 80 different tariffs applied to different produce.  In the case of beef the tariffs can be 20 percent upwards, depending on the source, quality and cut of the meat.

Let us say that, post-Brexit, Britain decides to pursue a cheap food policy as a reward for its own people for putting up with the disruption that Brexit will cause.  Let us say they remove tariffs on beef from Brazil and Argentina, lamb from New Zealand, etc., and compensate their own farmers for the lower market prices with direct support payments. Beef prices on the British market would crash.  That would have a devastating impact here, particularly in rural areas where jobs are already scarce.

It could also cause chaos not just in relation to our beef exports to the U.K. but to sales of beef here at home.  If cheap Brazilian beef were available in Northern Ireland, why would restaurants here not go up there to buy their steaks in bulk? This is just one example of how difficult the situation we face after Brexit could be.  In public the government here is expressing the hope -- even the expectation -- that somehow our trade relations with Britain will remain much the same, with free trade as at present or at worst minimal tariffs.

This is no more than wishful thinking.  Privately, behind the scenes, the government and many other people here are getting increasingly worried about the future.

They're not panicking yet.  But give it time.