Enda Kenny’s speech appeared to compare Irish refugees from the Famine to those today banned by Trump’s executive order. 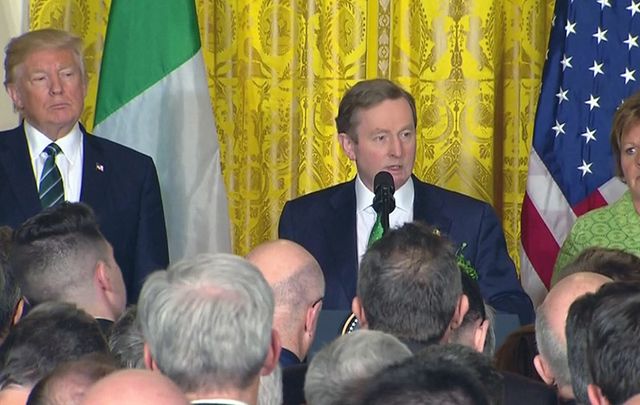 A speech by Irish leader Enda Kenny which appeared to criticize the immigration policies of Donald Trump by comparing Irish refugees from the Famine to those today banned by Trump’s executive order has gone viral.

Channel 4, in Britain, placed the speech on their Facebook page where it has attracted close to 30 million viewers to date and gone viral.

Kenny was speaking at the White House reception in his honor and Trump was only feet away when Kenny spoke about the Irish immigrant experience. Trump did not appear to react negatively to his remarks.

Democrats have seized on the speech, calling it a stern rebuke by the Irish leader, and others have contrasted Kenny’s defiance with the meek appearance of British leader Theresa May when she visited Washington.

“Ireland came to America because – deprived of liberty, opportunity, safety and even food itself – we believed,” he told the crowd.

“Before John F. Kennedy’s famous word’s we asked “what we could the Irish do for America," he stated.

Read more: Don’t laugh – Trump may well have been hacked by the British