Heavens to Betsy, who would ever dream... In fact, they have been doing it to Americans for a century. 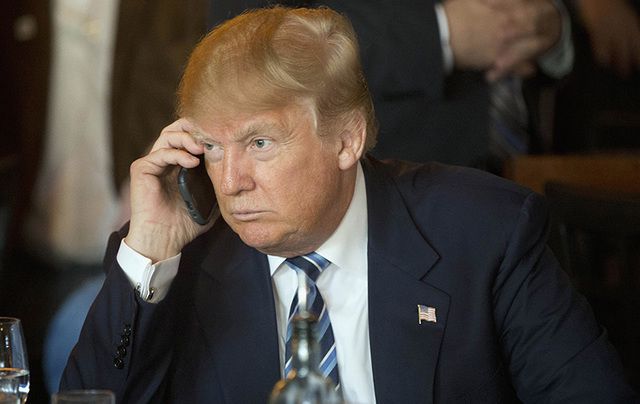 The UK tapping the US President? "Heavens to Betsy, who would ever dream... In fact, they have been doing it to Americans for a century."

Heavens to Betsy, who would ever dream that the British would dare to wiretap President Trump’s phone calls?

In fact, they have been doing it to Americans for a century. The beginning of their unlawful surveillance on American citizens was against Irish Americans.

After the First World War Britain compelled the London offices of telegraph companies such as Western Union and AT&T to share every telegram between the United States and Ireland. The British well knew that the arms and supplies from the US were fueling the War of Independence. A shocked US Senate investigated the matter, but the surveillance had only begun.

So, we should not be surprised at the Trump episode. Of course, everyone still pretends otherwise. “Shocked ‘British diplomats are incensed at the charge they wiretapped the Donald.

“This is a dangerous game,” Former Ambassador to the US Sir Peter Westmacott wrote in The Guardian. “The intelligence relationship between Britain and America is unique and precious. It is critical to our shared efforts to counter terrorism.”

Westmacott adds that “gratuitously damaging it by peddling falsehoods and then doing nothing to set the record straight would be a gift to our enemies they could only dream of.”

The British would never, surely, do such a thing. Except...consider this report from Atlantic Monthly:

The British government “intercepted the emails and phone calls of foreign dignitaries (no doubt including Americans) attending the 2009 G20 meetings in London, according to the latest tranche of leaks released by The Guardian.

“The Guardian reported that the British intelligence agency GCHQ set up fake internet cafes for delegates to use in order to log their keystrokes, broke into their phones, and kept round-the-clock records of phone calls during the summit.

So spare me the shock and hurt on the part of the British spy bosses who are darn good at what they do, as the Irish well know.

He idiotically insisted on using his own cell phone during the transition at Trump Tower and would have been a very obvious target. He is the prime target in the world today, such a loose cannon that any inside knowledge gained on his plans would be extremely valuable.

President Obama himself was no slouch in the intelligence spying game. The Daily Telegraph reported in 2010 that Obama had authorized the tapping of Chancellor Angela Merkel’s phone after a conversation with the National Security Agency.

Obama’s authorization was merely a continuation of the practice. Merkel had been tapped since 2002, the Telegraph revealed.

“Gentlemen do not read each other’s mail,” Henry Stimson famously commented when in 1929, as the U.S. Secretary of State, he withdrew funding from the Black Chamber program that had been deciphering messages sent by foreign ambassadors.

However, as author Jack Clancey points out, “By the time he became the Secretary of War, during World War II, Stimson ceased to be a gentleman, as he strongly supported the interception and decryption of messages, from those considered enemies.”

The British wiretapped pro-German groups and individuals in America before the US entered the war, all done with a nod and a wink.

Indeed, it was thought that the saintly FDR asked the British quietly to include wiretaps on some of his most bitter rivals as well.

During the Cold War the Cambridge Five communist spy ring, led by Kim Philby, plundered CIA and FBI files and released them to the Russians.

The Irish Times reported that the documents, published in 2014 by Süddeutsche Zeitung with the Irish connections identified by the Times, revealed an extensive list of submarine communication cables that the UK’s Government Communications Headquarters (GCHQ) has access to.

One of these is SOLAS, a 232km cable that stretches from Kilmore Quay in Wexford to Oxwich Bay in the United Kingdom.

However, it was subsequently revealed that UK authorities collect so much data that they are unable to access or monitor it all.

The Irish government hummed and hawed and ignored the deliberate spying. That was par for the course because they had done it before, at the beginning of The Troubles

In 1972 the London Times reported that John Wyman (a British intelligence operative) and "Dublin Special Branch C3 Garda Patrick Crinnion appeared before the Special Criminal Court 22/12/1972 in connection with this and charged with contravening the Official Secrets Act 1963.

British spies hide under blankets amid the Wyman/Crinnion trial.

"The stated aim was intelligence gathering of top IRA personnel and arms importation. The Times states it was believed that MI5 had been on active duty in the Republic since 1969. Crinnion was accused of passing classified state secret documents to Wyman.

"The Wyman/Crinnion trial commenced 01/02/1973 with some of the charges held in camera. The two accused were acquitted of six of the graver charges as the state ‘would not produce official documents in court.’

"They were subsequently found guilty of one lesser count and sentenced to 3 months imprisonment, although they were actually freed and departed to Britain. "

So much for spies being shot at dawn.

So, don't laugh off Trump’s accusations. There is certainly enough history of such activity to make it possible.

Read more: Hillary Clinton at Irish event says she wants to get back to work