In St Patrick's Day speech, former Democratic nominee says she is "ready to come out of the woods" after presidential loss to Donald Trump. 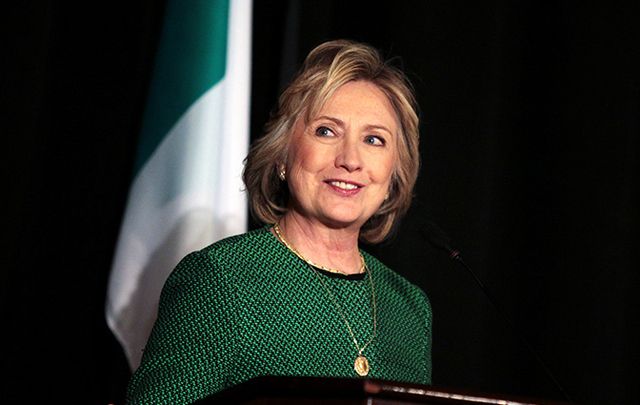 Hillary Clinton said in a St Patrick’s Day speech that she is “ready to come out of the woods” and help a divided America find common ground to work together and solve problems.

“I’m like a lot of my friends right now; I have a hard time watching the news,” Clinton told the Society of Irish Women on Friday.

Speaking at the organization’s annual dinner in Scranton, Pennsylvania, her late father’s hometown, Clinton recalled how as First Lady, she met with female leaders working on the Northern Ireland peace process.

“I do not believe that we can let political divides harden into personal divides. And we can’t just ignore, or turn a cold shoulder to someone because they disagree with us politically,” she said.

Clinton, who was seen waling in the woods around her home town of Chappaqua, New York, just days after losing the presidential election to Donald Trump, had said she wanted to stay in the woods “but you can only do so much of that.”

She told the Irish women’s group that it will be up to American citizens, not politicians in Washington, to bridge the political divide.

“I am ready to come out of the woods and to help shine a light on what is already happening around kitchen tables, at dinners like this, to help draw strength that will enable everybody to keep going,” said Clinton.

“What can we do to try to bring people together and to try to find that common ground, even higher ground, sister, so that we listen to each other again and we know that we can make a difference? I’m not sure it will come out of Washington yet, but I think it can come out of Scranton. Let’s find ways to do that.”

Clinton was warmly received in Scranton, where her grandfather worked in a lace mill, the Irish Times reports. Her father left Scranton for Chicago in search of work during the Great Depression, but frequently returned to Pennsylvania. Clinton recalled how she would often spend summers at the family’s cottage on nearby Lake Winola.

The former Secretary of State is scheduled to give several talks in the upcoming months, including a commencement address at her alma mater, Wellesley College in Massachusetts, on May 26. She will accept the Trailblazer Award from the LGBT Community Center in New York on April 20.

She is also writing a book of personal essays that will include reflections on her loss to Trump.