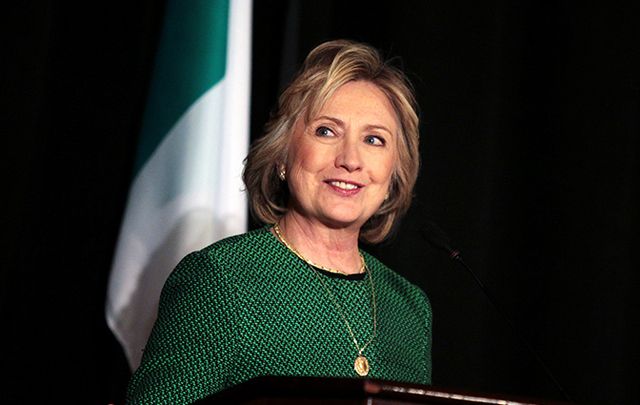 Former Secretary of State Hillary Clinton will break her silence this St. Patrick’s Day, delivering a keynote speech for the Society of Irish Women’s 19th annual St. Patrick’s Day dinner celebration. Returning to Scranton, PA, for the first time since her defeat in the 2016 presidential campaign, Clinton’s presence was kept a closely guarded secret until Wednesday’s announcement and has been greeted with enthusiasm by the society’s members.

“I am so, so excited for Hillary to come back to our city to motivate women as she has done for years,” said Mary Clare Kingsley, co-president of the society.

“My first reaction was, ‘Oh my God.’ We couldn’t have gotten a better speaker,” added Carol Thomas, a former president.

“She just exemplifies everything we stand for as strong women in (Pennsylvania).”

Hillary Clinton last visited Scranton some 214 days ago while still on the campaign trail, delivering a stump speech at Riverfront Sports Complex on August 15, 2016, and touring the city with Vice President Joe Biden. Biden himself was born and raised in Scranton until he was ten years old and has previously attended the society’s annual St. Patrick’s Day dinner.

Since her disappointing loss to President Donald Trump last November, Clinton has remained off the radar, not appearing publicly in the time between her concession speech on November 9 and Trump’s inauguration on January 21, which she attended with her husband President Bill Clinton.

Since inauguration day, the former New York Senator has been spotted at several Broadway shows in New York and spoke at an unveiling ceremony of a new collection of stamps honoring her personal friend Oscar de la Renta.

The latest announcement from Scranton, however, joins the growing list of public speaking engagements to be made by Clinton in the coming months. She is also expected to speak this March 8 on International Women's Day at an event co-sponsored by Vital Voices, an organization she co-founded in 1997 with another former Secretary of State Madeline Albright, and on April 20 she will accept the Trailblazer Award from the LGBT Community Center in New York.

On May 26 Clinton will travel back to her alma mater Wellesley College to deliver a commencement address and is also reported to be working on two books. Simon& Schuster will deliver a collection of essays based on Clinton’s personal favorite quotes while there will also be a reissue of her 1995 book “It Takes a Village” with new illustrations for younger readers. All proceeds from the reissue will go to charity.

Organizers of the Scranton event of sure the dinner is set to be a sell-out with thanks to Clinton’s address.

“For her to come to Scranton and recognize women here — 500 women like her — (when)she could be anywhere in the world, it’s just incredible,” Tracy Doherty, one of the society’s founding members, told The Times-Tribune.

Hillary Clinton will speak this March 17 at the Society of Irish Women’s 19th annual St. Patrick’s Day dinner celebration at Hilton Scranton and Conference Center, 100 Adams Ave. Tickets, including an open bar and dinner, will cost $75.