"In this crisis atmosphere, and without the steady hand of the late Martin McGuinness, the former deputy first minister, it is hard to see how progress will be made." 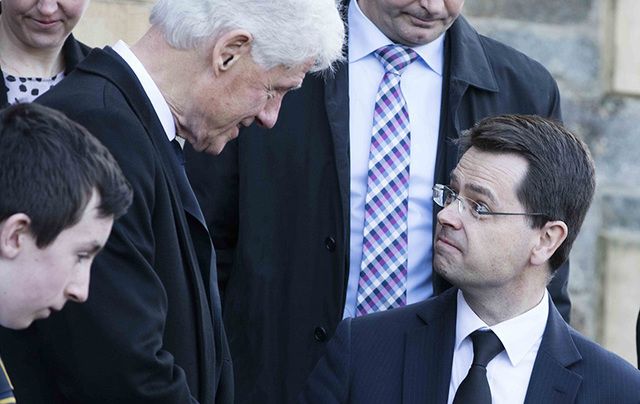 It is clear from all accounts that British Northern Secretary James Brokenshire is out of his depth in chairing the new Northern Ireland talks.

When Brokenshire was appointed to the job as secretary last July, it seemed a pretty simple assignment. There was a settled government in place and the power sharing arrangement looked solid.

Since then, however, there has been major upheaval, sparked by the “cash for ash” renewable heating scandal which led Sinn Fein to demand the resignation of First Minister Arlene Foster.  She refused to go, and an election last month subsequently happened.

Now the two main parties in the North have daggers drawn, with only a limited time period to form a new government.

In this crisis atmosphere, and without the steady hand of the late Martin McGuinness, the former deputy first minister, it is hard to see how progress will be made.

Brokenshire worsened the situation considerably on the day after the talks began with an article he wrote for The Daily Telegraph stating that there would be no more prosecutions of British Army personnel accused of nationalist killings.

Such an edict went down very badly and undermined Brokenshire’s position as a neutral talk overseer.

Brokenshire has no experience of the Northern Ireland conflict.  He probably would have had great difficulty naming the principal players before his appointment as Northern secretary.

It is clear that what is needed now is an outside chairperson, which has proven successful in the past.  We can all remember the role Senator George Mitchell and later Richard Haass played in securing Northern Ireland peace.

It is to America that the Northern Ireland parties should look again.  This should be a no brainer for the Trump administration, which is looking for any good news on the diplomatic front.

Men and women of the stature of Haass and Paula Dobriansky, who both performed incredibly well in Northern Ireland, should be asked about their availability to return to the state and take over as chairpersons of the talks.

Indeed, the influence of Europe may very well be needed also, and there is no reason why the European Union should not appoint a facilitator.

Northern Ireland is one again on the cusp, and a long period of direct rule beckons which will lead to political stalemate and obvious problems down the road.

Power sharing institutions must be re-calibrated and brought back.  Both sides agree on deals already made, but they have not been implemented so far.

So the need for an outside chairperson, given the fact that the hapless Brokenshire is completely out of his depth, is very real.

It is a new ear in Northern Ireland without McGuinness at the helm of the nationalist community.  That is all the more reason why the need for outside intervention, which has made all the difference in the past, should once again happen.

We all remember the incredible job that Senator Mitchell did to get the Good Friday Agreement in place when it looked odds on that it could not be achieved.

The current impasse is neither as difficult nor as complicated as that arrangement was. Yet, it bears the hallmarks of one crisis too many for the power sharing agreement, and the potential for a damaging period of direct rule.

Nobody wins with direct rule. Certainly not with a rookie like Brokenshire in command of the state.

There is no shortage of good candidates on the Republican side, as was proven during the Bush administration. Indeed the position should not even be political.

The Northern Ireland peace process must survive and overcome these latest difficulties.  It cannot do so with Brokenshire at the helm.