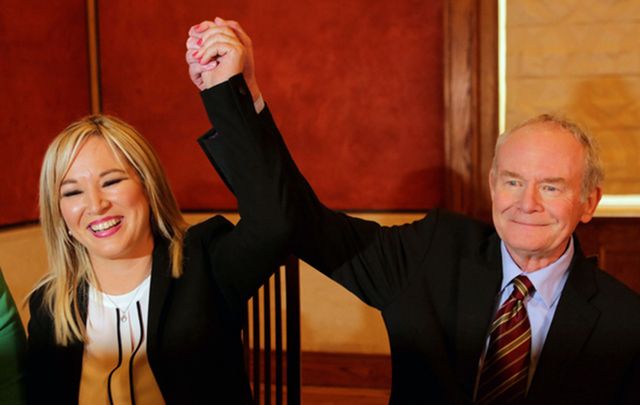 Outgoing Northern Ireland health minister Michelle O’Neill has been named as the new leader of Sinn Féin in Northern Ireland. O’Neill, 40, will replace former Deputy First Minister Martin McGuinness who announced on Friday he would not run for re-election due to ill health. She is the niece of long-time Irish Northern Aid official Paul Doris who was Grand Marshal of the St. Patrick's Day parade in Philadelphia last year and a mother of two.

Northern Ireland is set to go to the polls on March 2, meaning O’Neill could become Deputy First Minister or First Minister of Northern Ireland depending on how Sinn Féin fare in the election. If Sinn Féin is returned as the largest party within the nationalist community, they will face negotiations with the largest party returned for the unionist community in an attempt to restore the power-sharing government in Stormont.

The previous power-sharing government between Sinn Féin and the Democratic Unionist Party (DUP) collapsed earlier this year amidst an increasingly strained relationship between the two parties. McGuinness stepped down from his role as Deputy First Minister in protest of the manner in which former First Minister Arlene Foster of the DUP was dealing with a green energy program scandal that could be over $500 million over budget.

O’Neill, who has represented mid-Ulster in the Northern Ireland Assembly since 2007, is the first leader of Sinn Féin in Northern Ireland to have no direct IRA involvement, according to The Guardian, although her father was a former IRA prisoner. McGuinness, the IRA’s former chief of staff, announced last Friday he would not stand in the forthcoming assembly election as he has been diagnosed with a rare condition that attacks the heart, central nervous system and vital organs such as the kidneys.

On announcing O’Neill’s appointment, Sinn Féin President Gerry Adams declared she would take the party into the next generation.

“As a united all-Ireland team, we will give her the space and support to find her own voice and continue the good work Martin pioneered,” Adams said.

O’Neill herself announced that her appointment was “a huge honor, a really big, big privilege for me” stating that she was “following in the footsteps of a political giant”.

Republic of Ireland Minister for Foreign Affairs Charlie Flanagan also congratulated O’Neill on her appointment. “I believe we share the same determination to advance peace and stability in Northern Ireland for the benefit of all its people,” he said.

Born in Co. Tyrone on January 10, 1977, Michelle O’Neill hails from a family of prominent Irish republicans, her father Brendan “Basil” Doris being a former IRA prisoner who later became a Sinn Féin councilor. She is the mother of two grown children.

She began working for Sinn Féin when the Good Friday Agreement was signed in 1998, working directly with Martin McGuinness and his fellow Mid Ulster MLA Francie Molloy, and training as a welfare rights adviser.

O’Neill took over her father’s position on the Dungannon Borough Council when he stepped down in 2005, beginning her Assembly career in 2007.

She has previously served in the Northern Ireland Assembly as Minister for Agriculture and Minister for Health.