Party will not be nominating for the position of Deputy First Minister tomorrow and called for an election to allow the people to have their say. 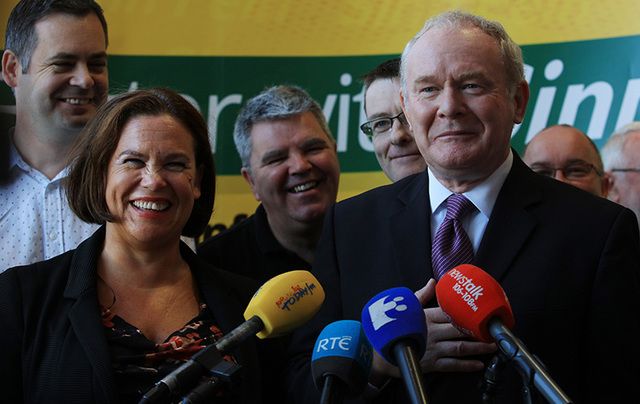 Sinn Féin Member of the Legislative Assembly (MLA) Michelle O'Neill has said her party will not be nominating for the position of Deputy First Minister tomorrow and called for an election to allow the people to have their say.

The power-sharing government collapsed ten days ago, when Democratic Unionist Party First Minister Arlene Foster refused to step aside after a scandal involving massive over-payments for a renewable fuel scheme.

Foster was the responsible minister at the time.

Northern Ireland Secretary James Brokenshire, a member of the British government, says there is no other alternative but an election as a return to direct rule was not feasible.

And according to O’Neill:

“For over ten years Martin McGuinness has worked to ensure that the institutions in the North delivered for all the people.  During that time, he has faced threats and disrespect. But he persevered, working with three successive DUP leaders, because it was the right thing to do.

“The actions of the British government over this period in failing to honor their agreements and imposing Tory policy, austerity, and Brexit against the will of the people undermined the political process.

“The Irish government have consigned themselves to the role of onlooker and presented themselves as some sort of impartial referee. That is a fundamental mistake.  They are the custodians of the agreements that are being hollowed out on their watch and that has compounded the current crisis.

“Against this background the DUP has failed to live up to their responsibilities to represent all in the community and to promote equality and respect.

“The RHI scandal, and other financial scandals, further eroded confidence in the institutions. The RHI scandal has the potential to cost the public purse £500 million over the next twenty years – money which must come from our public services. This is not an orange and green issue. The cost of the RHI scandal will be paid for by all the community, unionist and nationalist alike.

“Sinn Féin is very clear – we will not tolerate, incompetence, malpractice or allegations of a corrupt process in government. We have honored all our agreements, acted with patience and generosity, and demonstrated respect and equality to all in the community.

“Martin McGuinness moved to resign last Monday because it was the right thing to do.

“Sinn Féin will not be nominating for the position of deputy First Minister and the agreements mean that the people must now have their say.

“We all, including the other parties and the two governments, have a role to play to rebuild confidence in the political process and institutions that deliver for all our people and operate on the basis of equality and respect.

“Sinn Féin remains committed to dialogue. This will require a step change from the governments and other parties. There can be no return to the status quo at Stormont.

“At this time, there is no basis for credible negotiations to reinstate the institutions and we now must move to an election.”