Irish fury over delay in reopening all pubs and restaurants

“The summer is now lost for thousands and thousands of businesses across the state...there is no end in sight.” 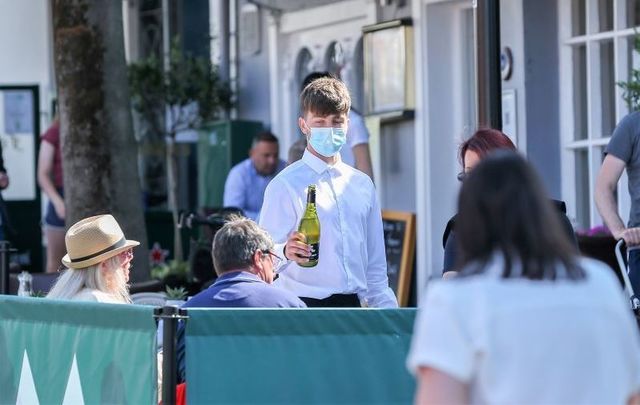 Outdoor dining, as seen here recently in Malahide, will continue to be the only option for now in Ireland. RollingNews.ie

Bitter comments from leaders of Ireland’s hospitality industry on Tuesday greeted a government announcement that next week’s planned re-opening of pubs and restaurants for indoor dining has been put on hold.

With public health officials estimating the highly infectious Delta strain could push Covid-19 new cases to up to 680,000 with up to 2,170 deaths between July and September, the government delayed the re-openings for weeks without a named date while they devise a plan to allow only vaccinated people inside bars and restaurants.

The industry is now confined to outdoor service in Ireland’s unreliable summer weather.

Chief executive of the Vintners’ Federation of Ireland (VFI) Padraig Cribben said it is “crazy” that people can travel abroad to holiday but not dine indoors in Ireland. He said that the next eight weeks are critical for the hospitality sector.

The CEO of the Restaurants Association of Ireland Adrian Cummins said businesses across the country will be devastated by the news that there is a delay to the resumption of indoor hospitality.

Speaking on RTÉ in advance of the anticipated Cabinet decision, Cummins said the plan to allow fully vaccinated people to dine indoors is “discriminatory and unworkable.”

He said, “The summer is now lost for thousands and thousands of businesses across the state...there is no end in sight.”

The Cabinet agreed in a three-hour meeting on Tuesday to postpone the reopening of indoor dining until there is a workable plan for how customers can prove they have been vaccinated.

He said, “The first thing that needs to be said is that we have made and are making tremendous progress. The roll-out of our vaccination program on a scale unprecedented in our history in combination with the careful staged re-opening of our society and the consistent co-operation of our people is working.

The Taoiseach added, “The feedback from across the entire country over the course of the last year is consistent. The process of reopening and closing different sectors has had a terrible impact on people’s mental health and well-being and it has a potentially devastating impact on the sectors affected. We want to avoid a repeat of that cycle.”

He said that the government was warned “in very stark terms” by public health chiefs that proceeding exactly as planned on July 5 carried a real risk of “greatly increased spread of the virus, increased hospital admissions, illness, and death.”

The government examined this advice and agreed to delay some elements of the further reopening scheduled for the 5th of July.

Martin said the number of people allowed at weddings will be allowed to increase to 50 as planned.

“However, a return to other indoor activities, including hospitality, will be delayed,” he added.

He said medical chiefs had advised that the safest way to proceed to indoor hospitality was to limit access to those who had been fully vaccinated or had recovered from Covid infection.

“The simple truth is that we are in a race between the variant and vaccines and we want to do everything we possibly can to make sure that the vaccine wins,” Martin said.

Martin said four million doses of vaccine had already been administered and each week meant that hundreds of thousands of additional vaccines could be given to people. More people would be vaccinated more quickly than before.

“The vaccine program is building us the wall of protection that we need. It will not be impenetrable. We know that. But it will be a massive defense against Covid, including the Delta variant,” he said.

Martin conceded that the tourism and hospitality sectors had carried a disproportionate burden throughout the pandemic. He acknowledged the delay he was announcing would be greeted with dismay and frustration.

In recognition of the circumstances the government would provide additional supports over the coming weeks, he said.