The unnamed male bartender allegedly spat in the beer of Jimeone Roberts, 29, after taking issue with a neo-Nazi tattoo on his right shoulder during an altercation at the Irish Times Pub on Little Collins Street, Melbourne. 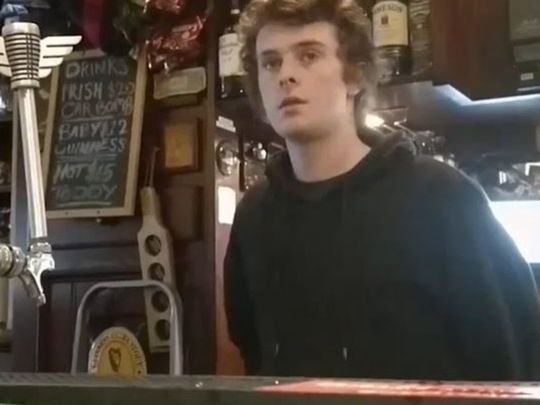 The Irish community in Australia has come together to support an Irish bartender who was fired for spitting in a neo-Nazi's drink.

The unnamed male bartender allegedly spat in the beer of Jimeone Roberts, 29, after taking issue with a tattoo on his right shoulder during an altercation at the Irish Times Pub on Little Collins Street, Melbourne.

The bartender is believed to have spit in Roberts' drink after spotting a Sonnenrad tattoo on his arm. The Sonnenrad - or sun wheel - was a symbol used by the Nazis in Germany which has since been adopted by neo-Nazis and white supremacists.

Roberts and his three friends confronted the bartender after the incident, but the Irish bartender held his ground, stating that Roberts had "started it" when he chose to get the tattoos.

"That is his personal choice. He can do what he wants," One of Roberts' friends told the bartender.

The men allegedly threatened the bartender and asked what time he finished his shift.

The Irish Times Pub posted an apology on Facebook, confirming that the bartender and another member of staff had been sacked for their involvement in the incident.

"The Irish Times management would like to take this opportunity to apologize to Jimeone Roberts and his friends Stefanos, Neil Erikson, Thomas Sewell, and Ricky T for the incident that took place on August 2," the Pub said on Facebook.

"Following the incident, the Irish Times management took immediate disciplinary action by terminating the two employees involved in the event, which violated our workplace code of conduct."

The James Connolly Association of Australia, which supports the Irish diaspora, has now organized a fundraiser for a queer charity chosen by the bartender

The event, which is organized in conjunction with the Community Union Defence League, will take place on September 10 at a venue that is yet to be determined.

Organizers said on Facebook that the staff members have struggled financially since losing their jobs but insisted that all funds raised during the event be donated to charity.

"Thanks to the nazi’s choice of slurs, an LGBTQI+ charity has been chosen to be the recipient of any funds raised," organizers said on Facebook.

The groups said they would be keeping some information private to protect the staff members and to avoid making the charity a target.

"We care for the safety of our comrades and will do everything in our power to minimise the risks posed by these Nazi goons," the groups said.

Three siblings who were violently killed in Dublin house are named