Dropkick Murphys swiftly told a neo-Nazi group who used their song "The Boys are Back" to "Stop using our song for your little dress up party video." 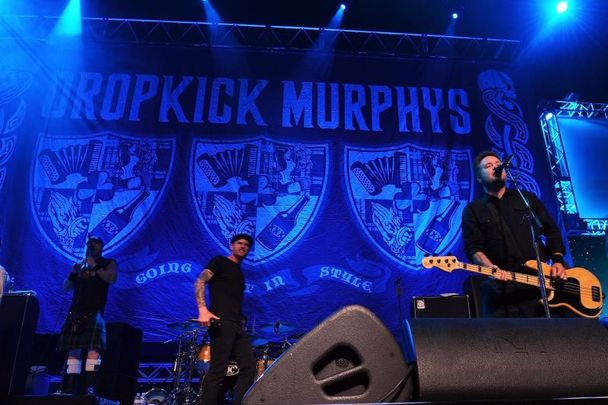 It’s probably not a great idea to mess with Dropkick Murphys.

Dropkick Murphys, the Irish American Celtic punk band who proudly hails from Boston, have taken aim at a neo-Nazi group that has used a DKM song for one of their videos that was filmed at the South Boston St. Patrick's Day Parade.

On March 20, roughly 20 members of the Nationalist Social Club / NSC 131, designated as a neo-Nazi group by both the Counter Extremism Project and the Anti-Defamation League (ADL), made their way to the South Boston St. Patrick’s Day Parade.

Standing along the parade route, the group, who were mostly wearing green tops and black masks, unfurled a banner that said “Keep Boston Irish” over a barricade. The "Keep Boston Irish" banner prominently featured a green shamrock as well as the neo-Nazi group's logo.

Husband and wife Rod Webber and Lauren Pespisa told IrishCentral on Tuesday how they heckled the neo-Nazi group until they left the scene.

The neo-Nazi group's presence at the parade has since been condemned by both parade organizers and elected officials who insist the group is "not welcome" and that the display was "disgusting."

Despite the condemnations, the neo-Nazi group has posted a video online that shows their activities at the parade for the day, including handing out fliers that say in part "if you love your heritage and your city, join us!" and "above all, we stand for the security and prosperity of white New Englanders."

The music featured in the neo-Nazi group's video is "The Boys are Back" from Dropkick Murphys.

DKM was alerted to the matter and sounded off on Twitter (with - warning - some colorful language):

"F----- Losers. Stop using our song for your little dress up party video. We will SMASH you."

Fuckin Losers. Stop using our song for your little dress up party video. We will SMASH you 👊🏻

This isn't the first time Dropkick Murphys have taken aim at Nazis. Back in 2013, the band's frontman Ken Casey made headlines when he punched a man who allegedly gave a Nazi salute at a Dropkick Murphys show at Terminal 5 in New York City.

"Nazis are not f----- welcome at a Dropkick Murphys show," Casey told the crowd after the scuffle.