The song is the Celtic punk band's most successful single and featured in Martin Scorsese's 2005 film,"The Departed." 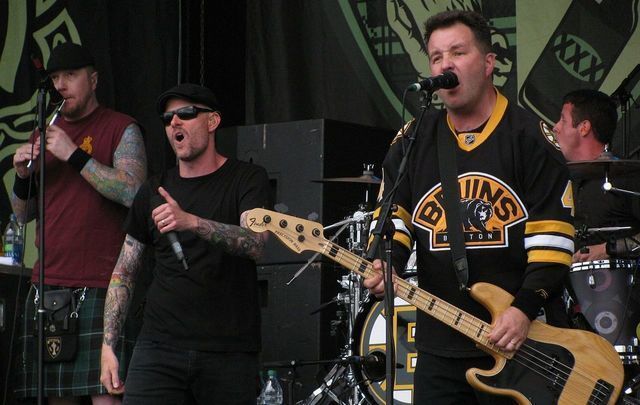 Ken Casey, one of the founders of the American Celtic punk band, has revealed the story behind the song, which became the group's most successful single and appeared in  Martin Scorsese's 2005 Academy Award-winning film, "The Departed."

Dropkick Murphys formed in Boston in 1996. Eight years later, the band had released four albums and performed a thousand shows.

“We’d rehearse at seven a.m.,” Casey told Louder, “and the borderline-homeless guy who took care of the rehearsal studios would scratch his head and tell us that most people get into music so they didn’t have to work those hours. But it made us feel like we had a real job.”

“James [Lynch, guitarist] had come up with the riff and it was so powerful,” Casey recalls. “But I was just laboring to find a lyric that worked with it.”

The lyrics for the song were found with the help of someone who, at the time, had been dead for more than 30 years---American folk singer Woody Guthrie.

"Around the time we were writing that instrumental, we got an invite from Woody Guthrie’s daughter, Nora, who runs the Guthrie Archives. She told us: ‘If my father had been born in your era he would have been playing music like you.’ Which was such a huge honor," said Casey.

“She told us her father had thousands of songs that were never put to music, just pieces of paper torn from notebooks. I said: ‘My God, I’d love to come down to the archives.’ I had to put on special white gloves, and I held these pieces of paper in the palms of my hands like I was holding a newborn child.

“So I’m going through these lyrics, which are deep, political, rebellious, heartfelt. All of a sudden I stumble on I’m Shipping Up To Boston, which is only five lines long. I was just, like: ‘What the fuck is this?’ It was so out of left field. But within seconds I said: ‘My God – that’s the lyric.’ The words fell right into our instrumental. And the Guthrie estate were ecstatic, because it was giving life to a song that would otherwise have just sat in a folder somewhere.”

The lyrics are written from the perspective of a sailor who lost a prosthetic leg climbing the topsail, and is shipping up to Boston to "find my wooden leg." However, the scant lines of text posed more questions than they answered.

“Was he down on the waterfront, looking at the ships?” Casey wonders. “He probably wasn’t actually seeing a peg-legged guy – it’s not like we had pirates in Boston Harbor in 1950. I really don’t know. But the ambiguity makes it a better song. To me, the words felt light-hearted. And we’ve always had a few songs on every record that don’t take themselves that seriously. I like to think I’m someone who laughs sometimes, not just the guy who walks around bitching about Donald Trump twenty-four-seven."

Casey said the simplicity and repetition of the lyrics made 'I’m Shipping Up To Boston' even more powerful. According to Louder,  "there was officially no easier anthem for a St. Patrick’s day crowd to bellow, even after drinking a river of Guinness."

Casey said: “You think about AC/DC, who are one of our favorite bands. If there was a shit-load of noodling and drum fills, it’d lose all its power. And that’s where 'I’m Shipping Up To Boston' got its power too. It was the first time in our career that we ever just left space.”

The original version of  'I’m Shipping Up To Boston' was released on the fourth edition of the Hellcat label’s cult Give ’Em The Boot compilation in 2004.

The song was re-recorded for their certified gold selling 2005 album, The Warrior's Code. It was this version "that bottled the anarchy" and caught the attention of Martin Scorsese, who used it on the soundtrack to his Academy Award-winning film 'The Departed.'

“After that we decided to make a music video with our own bootleg version of The Departed,” said Casey. “The ‘police’ and ‘hooligans’ were real. They’re all friends of ours.”

Casey said that, even after 17 years, there’s still nothing like performing "I’m Shipping Up To Boston."

“People ask me if I get sick of that song. No, I never have. The beauty of 'I’m Shipping Up To Boston' is that it’s only two minutes long. It leaves you wanting more."

Dropkick Murphys' tenth album, 'Turn Up That Dial' is out now.