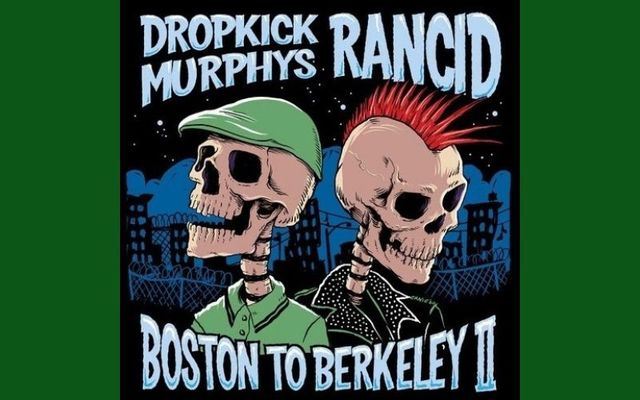 Dropkick Murphys and Rancid will hit the road together for the first time since 2017 for the co-headlining 'Boston To Berkeley II Tour' with special guests The Bronx on most dates.

The US trek, which was originally scheduled for May of 2020, will run from August 10 through October 16 and will feature festival appearances by Dropkick Murphys and Rancid at Riot Fest in Chicago on September 18 and Aftershock in Sacramento on October 8.

Tickets for the Boston To Berkeley II Tour go on sale Friday, June 18 at 10 am local time in most markets. The final band of the night will vary by date, with either Dropkick Murphys or Rancid as the closing act. Visit Dropkick Murphys website and Rancid's website for more details and to purchase tickets.

Rancid’s Tim Armstrong said: "Looking forward to hitting the road with the Dropkick Murphys again for the second edition of our Boston To Berkeley Tour. Our good buddies The Bronx will be joining us on tour as well. See ya in the pit!"

Dropkick Murphys’ Ken Casey said, “Can’t wait to get back out there and kick the touring door open again. This is a great lineup and we are gonna take the country by storm.”

Irish American rockers Dropkick Murphys proudly remain Boston’s rock ‘n’ roll underdogs turned champions. Since 1996, the boys have created the kind of music that’s meant to be chanted at last call, in packed arenas, and during the fourth quarter, third period, or ninth inning of a comeback rally.

As well as selling out gigs across multiple continents, Dropkick Murphys' music has generated more than half a billion streams, and they've quietly moved 8 million-plus units worldwide.

The Dropkick Murphys / Rancid Boston To Berkeley II tour dates are as follows: