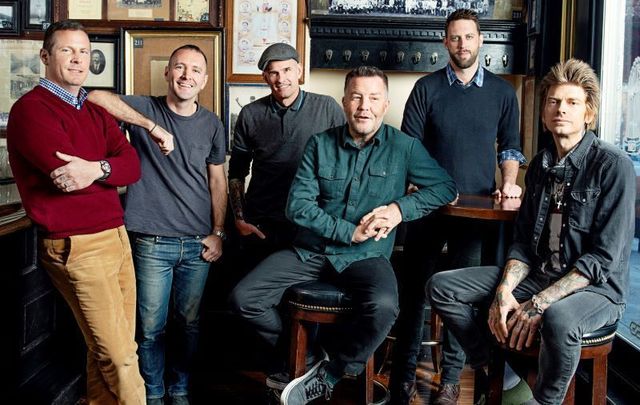 Dropkick Murphys continue to work on their new album and have announced a world tour for 2021.

Dropkick Murphys returned to Boston’s Fenway Park on Friday, May 29 for their free live streaming concert, “Streaming Outta Fenway,” presented by Pega, and the band has now announced the massive amount of money that was raised for charities.

Following the success of the band’s free “Streaming Up From Boston” St. Patrick’s Day performance, “Streaming Outta Fenway” marked the first-ever music event without an in-person audience at a major U.S. venue, and the first music performance directly on the infield at Boston’s legendary Fenway Park.

During the show, the band was joined remotely by longtime friend Bruce Springsteen for a special two-song “Double Play” that included Dropkick Murphys’ “Rose Tattoo” and Springsteen’s “American Land.”

Streaming Outta Fenway raised over $700,000 and counting for charities Boston Resiliency Fund, Feeding America®, and Habitat for Humanity, Greater Boston, with the help of fans and a generous $51,000 donation and $100,000 matching pledge from Pega.

You can watch back on Dropkick Murphys 'Streaming Outta Fenway,' which was streamed here on IrishCentral, here:

From the hallowed grounds of their hometown Boston ballpark, Dropkick Murphys will be STREAMING OUTTA FENWAY with a full-on live performance - FREE from the infield dirt !!! Featuring a special 'Fenway Double Play' with Bruce Springsteen. We're raising money for Feeding America, Habitat for Humanity Greater Boston, and the Boston Resiliency Fund. Chip in at donate.dropkickmurphys.com presented by Pega.com

Before going live, Dropkick Murphys took fans on an exclusive behind-the-scenes tour of the historic Fenway Park, and debuted the video for their newest single, “Mick Jones Nicked My Pudding” from the band’s upcoming album.

In addition to the “Double Play” with Bruce Springsteen, the set included a cover of Johnny Thunders’ “You Can’t Put Your Arms Around A Memory,” Red Sox victory songs “Tessie” and “Dirty Water” (The Standells), a stirring rendition of “Amazing Grace,” and the band’s own somber “4-15-13” along with several familiar DKM classics.

Next up, Dropkick Murphys will continue to work on their new album as COVID-19 guidelines allow. The band was nearly finished recording when the pandemic began and delayed the recording process. The new Dropkick Murphys album is now scheduled for release in  2021, with a worldwide tour to support.