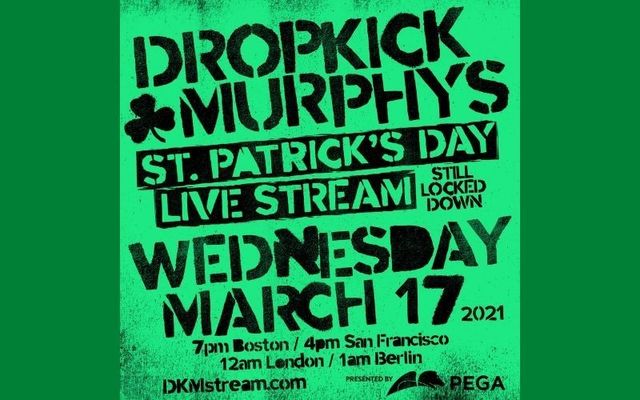 The free streaming online concert - with no in-person audience - will be simulcast worldwide via DKMstream.com. Still Locked Down will feature a variety of fan favorites, as well as select songs from the band’s new studio album, due out soon.

IrishCentral is delighted to be partnering with Dropkick Murphys again to bring the free live show to our global audience on March 17 right here on IrishCentral and over on the IrishCentral Facebook page.

Ken Casey, the founder of Dropkick Murphys, explains, “Instead of charging for tickets, we’re going to ‘pass the virtual hat’ so you can donate what you’d like to help support us in our efforts to keep paying our employees.

“When we did the first two free live streams for charity, our fans were super generous and we raised lots of money for good causes. But frankly, we’ve been out of work for over a year, so this one, we’ve gotta make about us. Of course, a portion will also go to charity, as always!”

People who donate in advance or during the stream (via DKMstream) will see their name scroll across the ticker at the bottom of the screen during Still Locked Down. 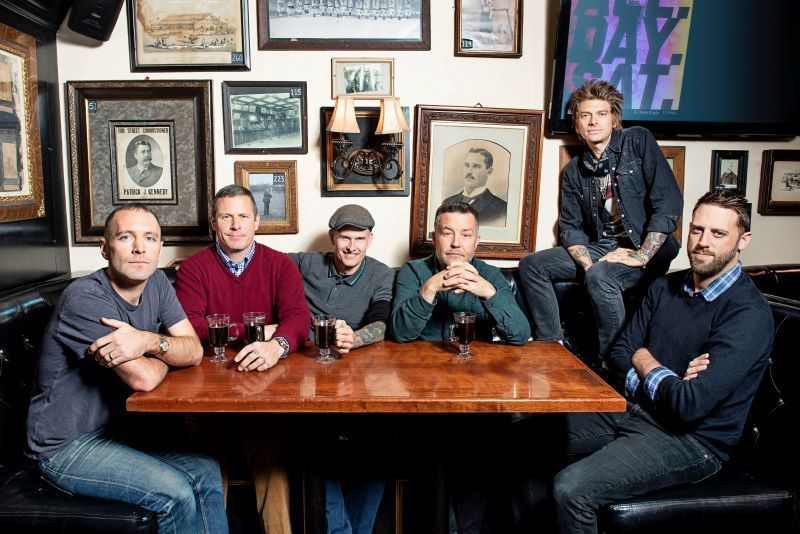 Dropkick Murphys have a long history of giving back and finding creative ways to connect with fans, and they’ve continued this tradition throughout these trying times.

On St. Patrick’s Day 2020, just as the health crisis was hitting critical mass in the United States, Dropkick Murphys held their Streaming Up From Boston live stream event in lieu of their normal Boston Blowout St. Patrick’s Day celebration. To date, it’s been watched more than 13 million times across platforms and was featured right here on IrishCentral as well as on CBS This Morning Saturday, CNN, NBC Nightly News, The Late Show With Stephen Colbert, and in the Wall Street Journal. The event raised more than $60,000 through the band’s charitable organization, The Claddagh Fund.

You can watch back on Streaming Up From Boston here:

In May 2020, they masterminded the historic Streaming Outta Fenway presented by Pega. Taking the infield at Fenway Park instruments in-hand, it stood out as the first-ever music event without an in-person audience at a major U.S. sports venue, and the first music performance directly on the infield at Fenway. Bruce Springsteen joined on the Jumbotron for a two-song “Double Play” of DKM’s “Rose Tattoo” and his “American Land.” Most importantly, they hauled in $700,000-plus to benefit charities such as Boston Resiliency Fund, Feeding America®, and Habitat for Humanity, Greater Boston.

You can watch back on Streaming Outta Fenway here:

Dropkick Murphys proudly remain Boston’s rock ‘n’ roll underdogs turned champions. Since 1996, the boys have thrown down with the kind of rock ‘n’ roll that’s meant to be chanted at last call, in packed arenas, and during the fourth quarter, third period, or ninth inning of a comeback rally.

With a celebrated discography including 2005’s gold-selling Warrior’s Code and the near double-platinum classic “I’m Shipping Up To Boston,” they’ve quietly moved 8 million-plus units worldwide.

Whether you caught a legendary gig at The Rathskeller (The Rat) under Kenmore Square, found the band by taking the T to Newbury Comics to cop Do Or Die in ’98, discovered them in Martin Scorsese’s Academy Award-winning The Departed, or saw ‘em throw down at Coachella (or one of the hundreds of other festivals), you’ve become a part of their extended family.

Among many accolades, they’ve earned three Top 10 albums on the Billboard Top 200, generated half-a-billion streams, and sold-out gigs on multiple continents. Not to mention, The Signed and Sealed in Blood standout “Rose Tattoo” graced Loudwire’s "Top 66 Best Of The Decade Rock Songs" at #21 with a bullet.

Most recently, 2017’s 11 Short Stories Of Pain & Glory (released through the band's own Born & Bred Records), bowed at #8 on the Billboard Top 200 and emerged as the #1 independently released album. In 2021, they return with their tenth full-length album.

Ahead of Dropkick Murphys St. Patrick’s Day Stream 2021...Still Locked Down, the band has announced that their next album "Turn Up That Dial" will be released on April 30 and is available for pre-order here. Check out their latest single "Middle Finger" here: