CelticMKE's At Home St. Patrick's Celebration features a full day's worth of programming including performances from some of Ireland's emerging musicians.

In Partnership With:
CelticMKE 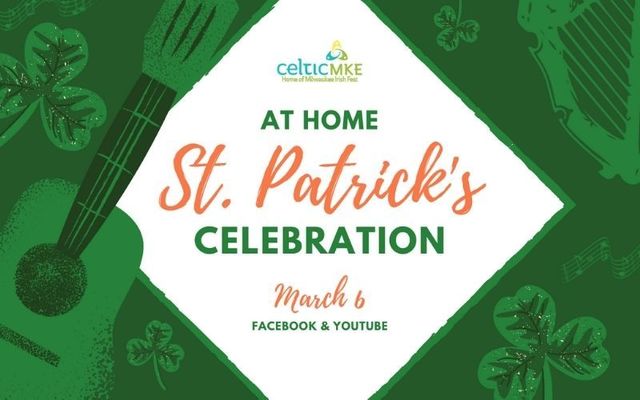 CelticMKE, home of The Milwaukee Irish Festival, invites you to celebrate the greenest season of the year with its free, at-home St. Patrick's celebration!

Presented in partnership with TradFest in Dublin, Ireland, the At Home St. Patrick’s Celebration will provide a full day's worth of programming, ranging from family entertainment to cultural shows, and performances from emerging artists in Ireland.

The entire At Home St. Patrick's Celebration virtual program will be free to tune in to on CelticMKE's Facebook and Youtube Channel starting at 10 am CST on March 6.

While the full day of events will feature two hours of family entertainment, as well as cultural presentations from people including Ambassador Daniel Mulhall, Damian Shiels, Mike Hanrahan, and a presentation from Fishamble, CelticMKE's At Home St. Patrick's Celebration also presents several emerging musicians in Ireland. 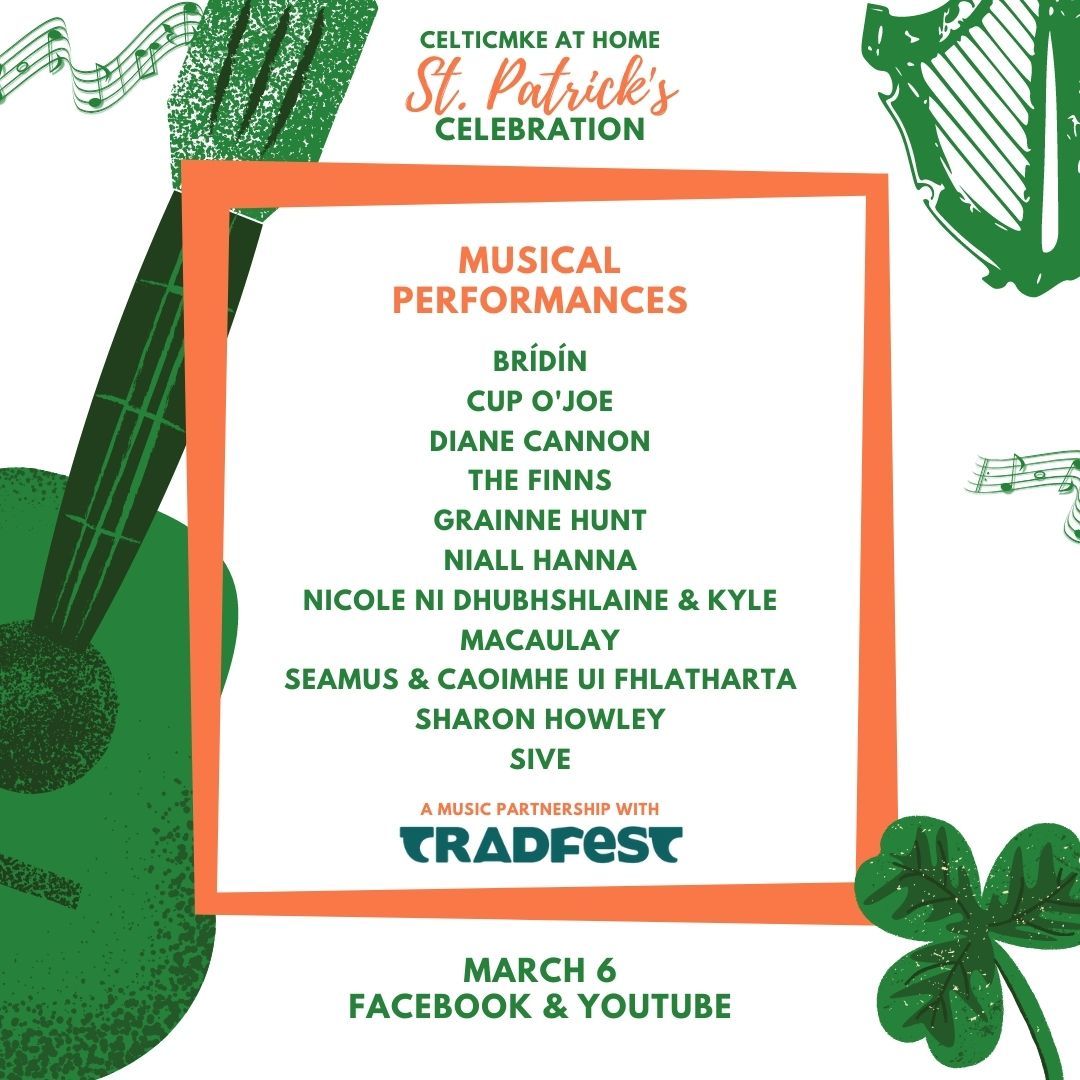 BRÍDÍN, West Co. Sligo native, carries on the tradition of Irish music into the fourth generation of her family.

Over the past number of years, BRÍDÍN has developed her own style influenced by her natural surroundings and rooted in her background in traditional Irish music. BRÍDÍN creates her pieces by looping harp and vocals to create a very unique sound and experience for the listener.

Cup O’Joe is a close family trio who have been playing together from their early teens. They were raised in the traditions of bluegrass and folk and it is these traditions that their music is rooted in. They blend the intricate tones of bluegrass, folk and jazz to tones to create their own progressive acoustic sound.

Forged out of the centuries-old traditions of her native Donegal, Diane Cannon is a singer who brings the songs and the music played by the hearth fire of a long-gone Ceilí house, to the sophisticated tastes of a 21st-century audience. From Meenlaragh, which nestles between spectacular Errigal and the Islands of Tory and Inisboffin in the heart of the Donegal Gaeltacht, Diane inherited her musical talents from both sides of her family.

The Finns are a folk music duo from Laois, Ireland, brothers Hugh and Ciaran Finn. Their roots lie in traditional Irish music but their original songs have been described as alt-folk roots, or indie folk music, with strong hints of blues and rock.

They have incredibly catchy, lovable, and seriously impressive original songs that are easy to fall for.

Songs from Ireland is a new Irish folk project and record from contemporary folk singer Gráinne Hunt and award-winning guitarist Brendan Walsh.  They perform a collection of traditional Irish ballads and folk songs in both English and Irish, carefully arranged by Brendan to give a modern new feel to beautiful old songs.

Niall Hanna is a traditional folk singer and songwriter from Derrytresk in Co. Tyrone. In early 2018 he burst on to the Irish folk scene with the release of his first solo album of songs ‘Autumn Winds’. Featuring some well-known Ulster ballads, the album also displayed Niall’s ability as a young songwriter.

Kyle and Nicole are two exceptional young traditional musicians bringing an excitement and vibrancy to the scene today.

Their music, while firmly rooted in the traditional idiom is uniquely interpreted by the duo on guitar, flute, concertina, and whistle.

Séamus and Caoimhe Uí Fhlatharta are a brother and sister duo from Connemara on the west coast of Ireland. Keen vocalists, multi-instrumentalists and dancers, their mother tongue, Gaeilge, is often at the heart of their musical performances and other endeavours.

Sharon Howley is a multi-instrumentalist from Kilfenora, Co. Clare working both as a performer and educator.

Sharon began playing cello at the age of 10 and is now one of the pioneers of cello within Irish Traditional Music. A member of the Kilfenora Ceili Band, she credits her unique style of traditional cello playing to her deep immersion in Irish Music growing up, drawing on techniques from other Irish traditional instrumentalists to create an authentic ‘traditional’ sound.

Combining haunting, multi-layered vocals with delicately woven musicality and an undeniable charm, Sive has carved a truly compelling style of alt-folk that is not afraid to differentiate from the norm. She was recently dubbed 'one of the most inspiring and exciting artists of our time' by Female First UK.

CelticMKE, home of Milwaukee Irish Fest, and TradFest Temple Bar formed a partnership in 2014 - together, they explore new ideas to help build each other's festivals and programs. TradFest has been a constant source of emerging talent for Milwaukee, and CelticMKE has helped build TradFest’s United States audience as its festival grows larger each year. This is done in part by TradFest bringing emerging artists to Milwaukee Irish Fest and CelticMKE putting together an annual tour to TradFest in Dublin.

Together they focus on the development of new artistic talent and how to present that talent in new and exciting environments. Follow TradFest and CelticMKE on social to stay up to date on the latest in Irish music.

"This virtual At Home St. Patrick's Celebration is supported by Aer Lingus, ArtFlo, R&R Insurance, Culture Ireland and also in part by a grant from the Wisconsin Arts Board with funds from the State of Wisconsin and the National Endowment for the Arts."

Tune in to CelticMKE's At Home St. Patrick's Celebration on Saturday, March 6 from 10 am CST. You can learn more about the free, virtual event here!