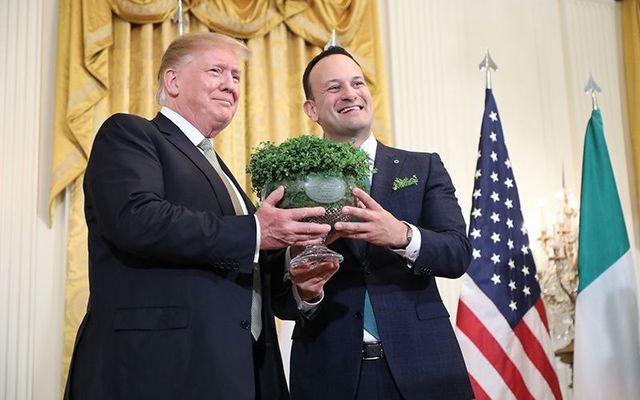 On February 29, 2020, President of the United States, Donald Trump issued the following proclamation:

"Irish-American Heritage Month is celebrated by proclamation of the President and Congress in the United States to honor the achievements and contributions of Irish immigrants and their descendants living in the United States. It was first celebrated in 1991. The heritage month is in March to coincide with Saint Patrick's Day, the Irish national holiday on March 17. Heritage Months are usually proclaimed by nations to celebrate centuries of contributions by a group to a country.

"During Irish-American Heritage Month, we celebrate the countless achievements of Irish Americans and recognize the remarkable contributions they have made to our Nation’s character, culture, and prosperity.  From America’s earliest days, Irish Americans have proven themselves to be confident, fierce, tough, and faithful.  They never give up, and they never give in, embodying the indomitable spirit that drives us as a people.  This month, we recognize their efforts to help build a stronger, prouder America, and we acknowledge the steadfast relationship we have with the Emerald Isle.

"Irish Americans have played a critical role in our Nation’s history and have made significant contributions to our military, government, and economy.  During the Revolutionary War, General Henry Knox, the son of Irish immigrants, helped lead General George Washington’s famous crossing of the Delaware River.  Years later, more than 150,000 Irishmen fought to preserve our Union during the Civil War, shedding their blood so that others would experience the blessings of liberty.  And one of our most famous buildings, the White House, was designed by Irish architect James Hoban, who came to the United States after the Revolutionary War.  From business and politics to film and music, Irish Americans have risen to distinction and helped move our Nation forward.

"As we honor the many ways in which Irish Americans have enriched our country, we acknowledge the enduring relationship the United States has with Ireland.  This longstanding relationship is only growing stronger thanks to our robust economy.  Approximately 700 American businesses have a presence on the Emerald Isle and account for 20 percent of the country’s employment.  Through our common bond of culture, language, and interests, Ireland provides a great opportunity for our businesses looking to invest in Europe.  Likewise, approximately 450 Irish companies are represented in the United States.  These companies employ more than 100,000 workers and have invested nearly $150 billion in our country.

"This month, as we celebrate the vibrant heritage and culture of Irish Americans and partake in St. Patrick’s Day festivities on March 17, we pay tribute to the tenacious Irish spirit.  We admire the devotion, faith, and resilience of the more than 31 million Irish Americans who help our country flourish, and we look forward to a continued strong and enduring friendship with Ireland for years to come.

"NOW, THEREFORE, I, DONALD J. TRUMP, President of the United States of America, by virtue of the authority vested in me by the Constitution and the laws of the United States, do hereby proclaim March 2020 as Irish-American Heritage Month.  I call upon all Americans to celebrate the achievements of Irish Americans and their contributions to our Nation with appropriate ceremonies, activities, and programs."