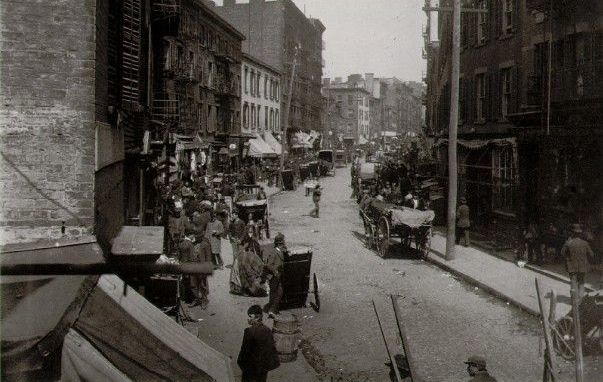 Mulberry Bend, in Manhattan, in the 1896, taken by Jacob Riis. MCNY.org / Public Domain

In his remarks, Madden estimated up to 35 percent of African Americans had Irish ethnicity, much of it the unfortunate impact of slavery, but while acknowledging that grim statistic there was also much kinship and connection that deserved investigation.

Thus was the African American Irish Diaspora Network born headed by Denis Brownlee, a successful media entrepreneur who has traced his own part Irish heritage back to Niall of the Nine Hostages. Brownlee became interested in the Irish part of his heritage through his friendship with Stella O’Leary, Head of Irish American Democrats.

The network was also launched by an emotional speech by Miriam Nyhan Grey the Director of Irish and Irish American Studies at NYU university. Back in 2015, Nyhan Grey had been instrumental in creating a seminar about the Black and Irish experience and influence on each other, so Wednesday night was the culmination of her efforts to bring together two races with far more in common than many might believe.

No other people arrived on American shores as disadvantaged as the starving Irish on their coffin ships and the African Americans in chains on their slave ships.

Both were firmly anchored on the bottom of the ladder in America but while the Irish eventually climbed out, a deep and devastating racism has continued to block the progress of African Americans

There is a tangled history. 150,000 Irish fought on the Union side which ended slavery in the American Civil War. Fighting 69th hero Irish-born Thomas Frances Meagher went further than any major union figure calling not just for freedom for African Americans but the right to vote too.

The tension was inevitable. Thrown together in the worst ghettos and slums of New York and other cities there was lots of tribal anger and mutual mistrust but we are also learning much kinship and creativity shared too.

A profoundly important article by African-American cultural expert Lenwood Sloan in a publication called Callahan’s Irish Quarterly back in 1982 which traced the intermarriage and musical influences of both groups on each other opened the eyes of many Irish Americans at the time. The article pointed out for instance that tapdancing was a fusion of Irish and African dance and many other influences were shared,

Great artists like musician Mick Moloney and acclaimed writer Peter Quinn stated separately that the article had a major impact on them as it did me. So it was truly remarkable that Lenny Sloan was actually present at night.

Sloan was in his 20s before he learned why his father insisted he be nice to the lone elderly white man that lived at the end of their block. Little was he expecting to discover that his family had a secret – that the man was his great-grandfather.

“Why was it kept a secret?” Sloan asked at the time.

When faced with the facts, the appearance of a white man in Sloan’s family tree does not seem all that surprising. After all people such as Barack Obama, Muhammad Ali, Eddie Murphy, Alice Walker. Michelle Obama all had or have Irish roots.

Sloan says there is a history of intermarriage between the two communities in places such as New Orleans that dates back to a time when both were dying by the thousands of draining swamps.

At the bottom of the ladder, many Irish men lost their lives as they were placed first in the swamps, ahead of the slaves. “If a slave dies, you lose the price of property. If an Irishman dies, you can get another one,” was the general consensus.

Before the Civil War, she said, ''the free mulatto population had the same number of black moms as white moms.''

For their part, the Irish will never forget the story of African-American social reformer Frederick Douglass and his trip to Ireland in 1845/46. Douglass would later appear in murals in Belfast during the Civil Rights Movement in the 1960s as Catholics in Northern Ireland, inspired by the Civil Rights Movement in the US, took it upon themselves to fight for their equality.

One of the first projects announced for the new group was a follow in the footsteps tour of Frederick Douglass’s  Ireland by the new African American Irish group. Now that sure beats a trip to the Blarney Stone!