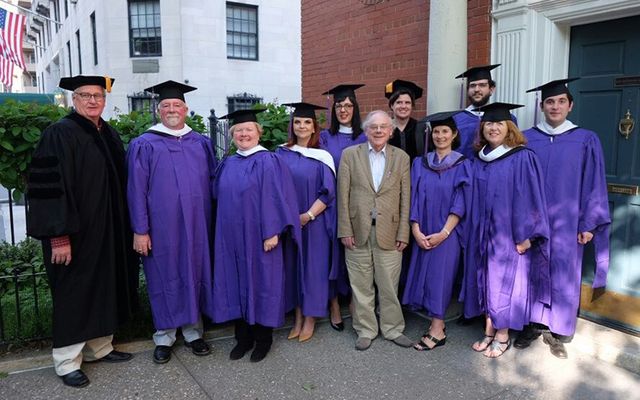 At its founding in the midst of what would become the Great Recession, the Masters of Arts in Irish and Irish-American Studies at Glucksman Ireland House at New York University was a risky proposition. As the program reaches its 10th anniversary it has become clear that it was an inspired one. This fall, we admit our eleventh cohort of students into a program that is going from strength to strength and is continually expanding the boundaries of how Ireland and her diaspora is studied.

Just a few months before he passed away, the late Irish poet and Nobel Laureate Seamus Heaney described Glucksman Ireland House NYU and the vision of its founders, Lew Glucksman and Loretta Brennan Glucksman, in the following way:

From a scholarly perspective, the addition of graduate level study in Irish and Irish-American Studies at NYU has certainly been ‘a boon’. The past decade has afforded us the opportunity to teach and mentor a diverse group of students who have gone on to apply their learning in an array of ways. For some, the degree is a pathway into a PhD program. We can now boast a cluster of alumni who are pursuing, or have completed PhDs, in institutions such as Cambridge University, Duke University, Emory University, George Washington University, University of Michigan, Drew University, The University of Limerick and the University of Wisconsin, among others.

Maura Anand, Ed Shevlin, Andrew S. Hicks, all of the class of 2016 of the Master of Arts in Irish and Irish American-Studies and contributors to Ireland's Allies, with the volume's editor Miriam Nyhan Grey at the Dublin launch of the book in the Royal Irish Academy.

Our New York City location and the immense footprint of the Irish in the United States ensures that the Master of Arts in Irish and Irish-American Studies also attracts many non-traditional students who enrich experiences of learning and teaching. Among the first students admitted to the program in the fall of 2007 was Joe Long, the son of Irish immigrants who came to New York from Arklow, Co. Wicklow in the 1920s. Joe grew up near a neighborhood made famous by the classic film On the Waterfront.

A senior sales and management director with United Technologies Group, Joe already had a lifelong passion for the study of Ireland from his undergraduate days in Manhattan College. He took a scenic route through the M.A. program, mainly due to the pressures of his busy job, but he graduated in 2012, having completed a thesis based on oral histories with the Irish in Chelsea and Greenwich Village that was later published in the annual journal New York Irish History.  Joe is still pursuing that interest by working on a documentary film and he generously returns to the classroom to share his experiences with our undergraduate students.

The publication of research undertaken in the course of the program is not uncommon. Virginia Ferris, Class of 2010, had her thesis on Irish-African intermarriage in 1870 New York City published in the American Journal of Irish Studies in 2012, a story that was later picked up as a feature by the New York Times. Virginia has gone on to parlay the oral history skills she started developing at Glucksman Ireland House NYU into her role as an Outreach and Engagement Program Librarian at North Carolina State University, where she was recently awarded a grant.

Likewise, another alumna, Kate Feighery, applies her interest in Irish Studies and archival management in an innovative way as the archivist for the Archives of the Archdiocese of New York.  Kate published two important essays based on her graduate research at Glucksman Ireland House – one on the demographics of the 1863 New York City Draft Riots, and another on the Irish community in the Bronx Irish neighborhood of Highbridge.

Seven of the twenty-four chapters in this weighty volume were authored or co-authored by individuals who have undertaken this degree, among them Ed Shevlin who, in collaboration with NYU faculty member Marion R. Casey, used newly-available sources to reconstruct the experiences of an Irish-American from Rockaway, Queens who fought in the GPO. Shevlin’s personal connection with Rockaway brought fascinating elements to the table during his research and was profiled in the New York Times in 2016. Insights into the student role in this publication can be seen in the video which accompanies this article.

Some of the current students pursuing the Master of Arts in Irish and Irish-American Studies who attended the Glucksman Ireland House NYU Gala on February 28 last at which Sir James Galway and Niall O'Dowd were honored.

The record of our first ten years has been impressive.  As we look to the future, we aspire to continue to build upon a strong foundation of teaching and research, including 20 years of the Archives of Irish America in NYU’s Bobst Library. The Master’s Degree in Irish and Irish American Studies at NYU is part of a dynamic graduate school, in the most dynamic city, in the most dynamic country in the world.

So there's no surprise that opportunity follows the Irish trail in New York City, as it has for so long, as it will in the future. For information on the program, including Open Houses, tuition scholarships and sitting in on a sample class, see the website and email ireland.house@nyu.edu or contact Director of Graduate Studies, Miriam Nyhan Grey at 212-998-3953. We are currently accepting applications for fall 2017. The priority deadline is April 15th. Late applications are considered. Applications are accepted on a rolling basis.