Gavin Brennan, 7, was treated to a special birthday parade after he beat both coronavirus and cancer in recent months. 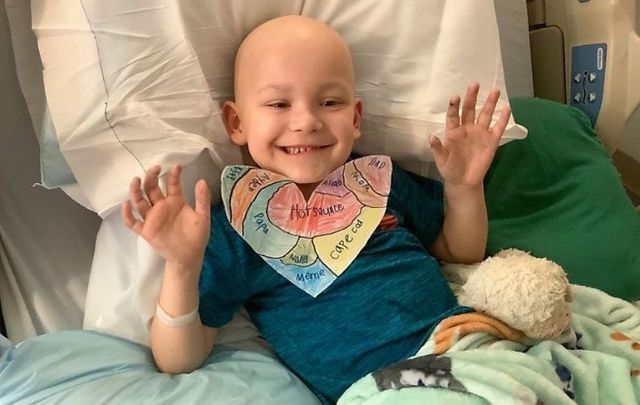 Gavin Brennan, a seven-year-old Irish American boy in Massachusetts, had a birthday to remember after he fought off COVID-19 and finished his chemotherapy treatment in April.

Gavin Brennan was treated to a convoy of fire trucks, police cars, and neighbors driving by his house in Dedham, Massachusetts to wish him a happy birthday after a turbulent start to 2020.

The first-grader was diagnosed with lymphoma in January and began a course of chemotherapy before the COVID-19 pandemic hit.

Gavin's mother, April Brennan, showed symptoms of the virus in late-March, and Gavin developed a fever.

Fevers are not uncommon in cancer patients and doctors didn't recommend a COVID-19 test for the seven-year-old, but his parents insisted and he tested positive for the virus.

Speaking to Boston 25 News, Gavin's mother described her worry and anguish when she heard the diagnosis.

"We thought our boat was sinking and this is it," April Brennan said.

Luckily, Gavin was mostly asymptomatic and avoided the most worrying effects of the virus.

However, disaster struck when Gavin came down with pneumonia several weeks later and tested positive for COVID-19 a second time.

His family once again feared the worst, but doctors were able to stabilize his condition and he pulled through once again.

Tim Brennan, Gavin's father, said that his son's attitude helped the family through the testing times.

"Through this whole process, he has been so resilient. It’s been amazing to see," Tim Brennan told Boston 25 News.

The good news keeps coming for the Brennan family.

Not only is Gavin now clear of COVID-19, but he was also able to complete his course of chemotherapy and he returned home from the Boston Children's Hospital for the first time in weeks.

You can watch the Boston 25 News report on the Brennan family here:

He celebrated all of that and his seventh birthday on April 29 when first responders, friends, and well-wishers drove by in a specially arranged "party parade."

"Happy birthday buddy," one policeman called out from his car's loudspeaker as he cruised past.

Gavin donned a face mask and sat in a lawn chair in his front drive to witness the heartwarming event.

CBS Boston was on hand for Gavin's special birthday celebrations:

In light of the good news, Gavin's parents want to give back. They set up a GoFundMe to raise funds for the Boston Children's Hospital as a thank you for their tireless work supporting Gavin over the last month.

The fundraiser has raised almost $15,000 in just over a week, around three times the original target.