Cork university to repatriate Egyptian mummy and other ancient treasures

The items in question include mummified human remains, a sarcophagus, a set of four Canopic jars, and items of cartonnage (coverings) dating from between 100 AD and 975 BCE. 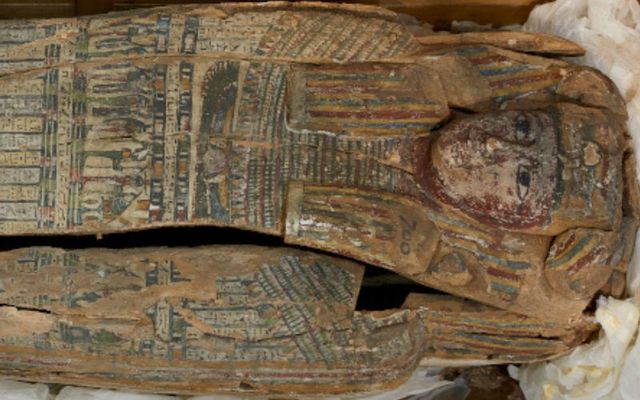 University College Cork (UCC) will repatriate a number of artifacts housed in its Heritage Collection to the Egyptian State, including mummified human remains.

The items in question include the mummified remains, a sarcophagus, a set of four Canopic jars, and items of cartonnage (coverings) dating from between 100 AD and 975 BCE.

UCC has been in talks with the Egyptian Embassy, the Department of Foreign Affairs, and the National Museum of Ireland about a plan for the safe preparation and transport of the objects.

The repatriation is expected to take place in 2023.

UCC received the mummified remains and sarcophagus through a donation from "African missioners" in 1928.

UCC said the sarcophagus was obtained on the mistaken assumption that it contained the remains of a queen since it was excavated from the Valley of the Queens.

However, it has since been proven that the sarcophagus contains the remains of an adult male between the ages of 45 and 50.

The sarcophagus is believed to be made of sycamore and decorated with pigment and is estimated to date from between 625 and 600 BCE.

According to the BBC, an inscription on the sarcophagus states that it contains the remains of a man named Hor. Meanwhile, decorations on the sarcophagus indicate a connection to Thoth, the Egyptian God of writing, wisdom, and magic.

The jars are believed to be the oldest items being repatriated and date from between 945-700 BCE.

Professor John O'Halloran, President of UCC, said the college was pleased to be able to return the items to Egypt.

"UCC takes seriously the care of its heritage assets and is pleased to be in a position to present these objects to the Egyptian State," O'Halloran said in a statement.

"I wish to thank all stakeholders for their assistance in developing a program for the return of these items, particularly His Excellency Mohamed Sarwat Selim, Egyptian Ambassador to Ireland, Minister Simon Coveney and his officials at the Department of Foreign Affairs, and the National Museum of Ireland."

Egyptian Ambassador to Ireland Mohamed Sarwat Selim said the repatriation of the objects was of the "utmost importance" and thanked UCC for their collaboration.

"I wish to emphasize the utmost importance of the ongoing cooperation between University College Cork and the Egyptian State through the Embassy of the Arab Republic of Egypt in Dublin, in seeking the return of the Egyptian mummy and the set of the canopic jars to our homeland," the Egyptian Ambassador said in a statement.