The book contains the only known Irish translation of Marco Polo's travels to China. 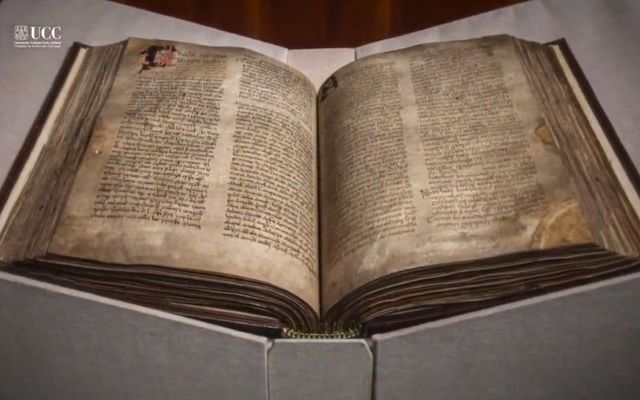 The Book of Lismore in the possession of UCC. University College Cork YouTube

An English Duke has donated the Book of Lismore, one of Ireland's most significant manuscripts, to University College Cork to put it on public display.

The Duke of Devonshire, one of Britain's wealthiest aristocrats, has donated the 15th-century manuscript to UCC, and the college eventually plans to put it on display in a gallery once it has redeveloped the Boole Library.

The Book of Lismore is one of the most fascinating and significant works to ever emerge from Ireland, featuring stories of the lives of Irish saints and the history of medieval Europe, including the conquests of Charlemagne.

Furthermore, the 198-page calfskin book includes the only known Irish translations of Italian explorer Marco Polo's travels to China, which detail Polo's adventures with the Great Khan of the Mongol Empire.

The manuscript was produced in the late 15th century at Kilbrittain in West Cork as a status symbol for Fínghin Mac Carthaigh, the lord of Carberry, according to UCC Librarian John Fitzgerald.

The book was eventually taken to Lismore Castle in County Waterford and later fell into the possession of the Cavendish family and the Duke of Devonshire when they took over the castle in the 1640s.

The iconic book was later taken to the ancestral home of the Dukes of Devonshire at Chatsworth in England as war broke out between Ireland and England in the early 20th century and was loaned to UCC in 2011.

Peregrine Cavendish, the current Duke of Devonshire, said that the family had been considering ways to return the book permanently ever since they lent it to the college almost a decade ago.

"Ever since the Book of Lismore was loaned to University College Cork for an exhibition in 2011, we have been considering ways for it to return there permanently," the Duke of Devonshire said.

"My family and I are delighted this has been possible, and hope that it will benefit many generations of students, scholars and visitors to the university.”

Meanwhile, Professor John O'Halloran, the interim president of UCC, said that the donation was a very historic moment for UCC and that the book would go on public display at the college's Treasures Gallery. Once completed, the gallery will house some of the university's most valuable collections and will serve as a tourist attraction for the college.