Instead of preparing for the festive St. Patrick's Day season, New York's Irish community is just trying to get by. 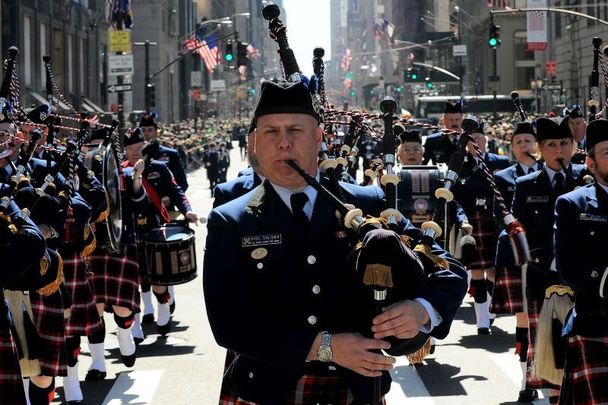 It's the start of February and the St. Patrick’s season in New York should have kicked off last Friday night, January 29, at Antun’s in Queens Village with what would have been the 117th annual United Irish Counties (UIC) dinner dance.

*Editor's Note: This column first appeared in the February 3 edition of the Irish Voice newspaper, sister publication to IrishCentral.

A host of other social events take place in February and March, even after the 17th, but not this year. The UIC dance was canceled and will not be rescheduled for later in 2021. All of the other county dances have been shelved due to Covid-19, and while some organizations hope to gather for a party later in the year many are opting not to.

This is the second year that Covid-19 has gut-punched the St. Patrick’s calendar and some members of the community are worried about the lasting impact on the county groups, many of which are over 100 years old.

“I’m very much afraid that they are on a downward spiral. The membership is dwindling. It’s hard to get people involved, and I’m afraid Covid will have a negative effect,” Mae O’Driscoll, the first female president of the Co. Cork Association, told the Irish Voice.

O’Driscoll, who served as president from 1980-1990 and has held a number of leadership roles since, usually attends at least six of the county dances each season in addition to a number of other gatherings. Last year’s Cork dinner managed to stay a step ahead of Covid, but this year there are no plans to convene.

“I’m concerned about the dinner dances fading out. This will be the second year in a row for many county groups having to cancel, and it could be an excuse for some people to say, well, if we didn’t have a dinner for two years why should we have one now,” O’Driscoll fears.

The dances used to attract hundreds and in some instances thousands of guests back in their heyday decades ago but have been on a steady decline for a while now. The county groups, created as social networks when emigration from Ireland was plentiful and people were looking to connect with others from home, have also found it hard to attract new members.

Covid-19 has resulted in the premature deaths of county members, O’Driscoll points out, including Mary McMullan, a Co. Antrim native who was the heart and soul of a number of Irish groups and fundraising initiatives. Her sudden passing last May was a shock.

“Mary was fine before she died. She was so sharp and so active. It was awful,” O’Driscoll adds.

Rita Lydon Lenz, president of the UIC and also an officer in the Mayo Society, shares O’Driscoll’s concerns about the future of the county associations.   She assumed the UIC presidency in 2020 after last year’s dance and has presided over one live meeting since. The UIC’s monthly meetings at Cathedral High School in Manhattan are, for now, a thing of the past.

“I feel bad for our members but there’s nothing we can really do about it,” Lenz tells the Irish Voice. “We’ve had a couple of meetings via phone and we did our essay contest but that’s about it.

“Normally we’d meet once a month and we’d have lots to talk about, the dinner dance, the journal, the feis. But now, unfortunately, we don’t really have anything much to talk about.”

Both O’Driscoll and Lenz agree that Zoom gatherings wouldn’t serve as an adequate substitute for a dinner dance, where guests dress up and look forward to meeting friends from other counties who they haven’t seen in a while.

“To tell the truth Zoom might be hard for some of our members because they are older. What everyone is really missing is the personal interaction not only from the dances but our meetings and communion breakfasts and other things like Christmas parties,” she says.

The UIC dinner, O’Driscoll says, wouldn’t be the same over Zoom.  “Not at all.  It’s nice to go out and see people. We haven’t done Zoom meetings with the Cork Association. People join the county groups for social reasons, and they can’t really be duplicated on Zoom.”

Gerry O’Donoghue is the new president of the Kerry Association, which hosted a Zoom social session last Friday night that attracted about 30 members “and people enjoyed it,” he said.

For the second year in a row the Kerry ball won’t take place on the Friday after St. Patrick’s Day, and the group’s headquarters in Yonkers, the Kerry Hall, remains closed.

“It’s very disappointing for sure, but people are dealing with a lot worse. We really have to put it into perspective,” said O’Donoghue, who added that there are no plans to reschedule the Kerry ball for later in the year.

The Mayo Society will host its next dance in 2022. The Leitrim Society, which was due to celebrate its 125th dinner dance last year, is hoping to reschedule for later this year and has hosted some meetings over Zoom.

Most of the county dances are hosted at Antun’s in Queens Village. The popular catering hall which can accommodate up to 1,400 guests has been devastated by Covid-19 restrictions, with mass cancellations of parties and weddings since last March.

Mickey King, the second-generation owner of Antun’s, recently made a video with his wife Christa in the hopes of securing a grant from the Barstool Fund, the charity started by Barstool Sports founder Dave Portnoy in December which has rescued more than 215 small businesses and raised more than $34 million. King was tearful when discussing what Antun’s is up against.

“Our catering industry has been hit the hardest.  We had 100 employees.  That number has gotten smaller and smaller. We just ran out of money,” he said in the video.

“I’ve been working here since I was five years old. These people are part of my life so you just can’t pack it in. It doesn’t work like that.”

King’s father Joseph owns the building, and Mickey pays rent – or, rather, used to pay.

“I can’t pay because I need money, but he has a huge mortgage so without my rent he can’t pay the mortgage. The bank wants me to collateral my house to extend the mortgage,” King said.

Lenz is hoping that when the battle against Covid-19 has been won there will be a pent-up demand for people to once again gather, though she acknowledges it will take some time to return to normal.  The UIC’s annual feis, which usually takes place in June, is up in the air for 2021; it attracts hundreds of competitors and spectators and the likelihood of it proceeding is doubtful.

O’Driscoll chairs the annual essay contest conducted by the UIC, and she’s kept busy these days coordinating that effort. Otherwise, social activity has drawn to a standstill.

When asked how she’ll celebrate St. Patrick’s Day 2021 she said, sadly, “I won’t be doing anything because there’s nothing to do and nowhere to go.”