Brent O'Leary, the grandson of Irish immigrants, is running in the Democratic primary for the New York State Assembly District 37 seat. 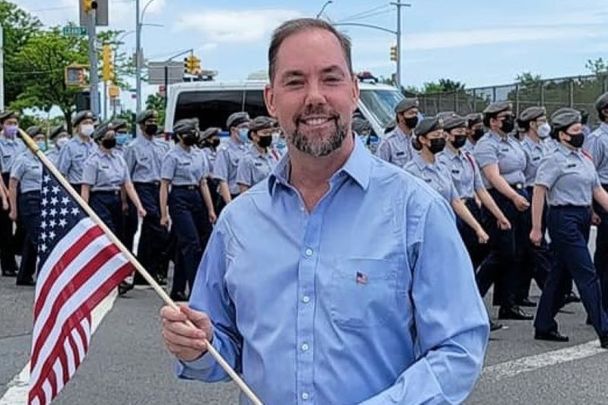 What a difference a year makes. In 2021, Brent O’Leary was a candidate for New York City Council District 26 in Queens. Way back then, Covid-19 was still front and center, and the Defund the Police movement was still going strong.

Nowadays, there’s a bigger issue on the minds of voters. Though Covid and its aftermath will remain with us for some time to come, most restrictions have been lifted and life has returned to a new normal.

As for cutting policing? O’Leary, now running in the Democratic primary for the New York State Assembly District 37 seat being vacated by Cathy Nolan, says the opposite is reality as far as his district’s residents are concerned.

Combatting crime is by far their top issue as Primary Day nears on Tuesday, June 28. Soaring levels of criminal activity, much of it random, have shaken and scared New Yorkers who are craving safety and security.

“We have knocked on over 20,000 doors. The number one issue we’ve heard at every single one is public safety,” O’Leary, the grandson of Irish immigrants from Co Clare, told the Irish Voice, sister publication to IrishCentral, during an interview last week. “If you don’t feel safe on the street or in the subway, it’s a huge problem.”

“Nobody is pushing for defunding. (One of my opponents) is saying that more police doesn’t stop crime. So then does he want to abolish the police?”

The opponent O’Leary refers to is Juan Ardila. When asked at a recent candidate’s forum hosted by the Queens Post media group if the NYPD’s budget should be reduced, the Alexandria Ocasio-Cortez endorsed candidate responded “yes.”

(There are two other District 37 contenders – attorneys Jim Magee, whose family came from Co Kerry, and Johanna Carmona.)

O’Leary has family roots in policing – his grandfather, uncle, and cousin were all members of the NYPD. Police presence during this current high crime wave is vital, he adds.

“We need more community policing, more police on the street and the subways. And we are going to re-establish trust with the police and the people living in the communities they serve,” O’Leary says.

The Queens native supports a five-borough residency requirement for NYPD members. “That was the norm in my grandfather’s day. He knew everybody where he worked.” And when violent criminals are apprehended, he’s in favor of keeping them behind bars until trial.

“We had a woman who was randomly attacked, walking down subway steps and then gets hit in the head with a hammer repeatedly. Her bag was stolen. (The criminal) is a person we want walking the streets? No.” O’Leary says.

O’Leary finished third out of 16 candidates in the 2021 City Council race. An attorney who returned to private practice with legal services firm Axiom after the loss, he was prompted to once again enter the political fray when Nolan announced her retirement. Many constituents in the district’s neighborhoods – including the heavily Irish Maspeth, Sunnyside, and Woodside – asked him to run, he says.

“It was really uplifting. As soon as she retired, I started getting so many calls to run. I’ve had a very good reception from all the doors I’m knocking on and I think we will win this race.

“Our field operation is great, and we’ve raised the most money. Our message is out there and it’s resonating. I’m in the subway for three hours in the morning, making calls in the afternoon, and out again in the evening. There is no holiday, and I love it.”

The 52-year-old O’Leary, a native of Jackson Heights who now lives in Long Island City, spent a semester at University College Galway and is proud of his Irish roots – his paternal grandfather Francis O’Leary took part in the Easter Rebellion in 1916, fighting the British for Irish independence. Francis was a member of the Irish Volunteers who was captured by the British and sentenced to death.

“They gave him a choice – get on the boat tomorrow or we hang you, so he got on the boat,” O’Leary recalled.

His father Frank, a World War II veteran, bar manager, and ticket clerk at Belmont Park race track, attended Hunter College on the GI Bill. He and his wife Laureen raised their three children in Jackson Heights, where O’Leary recalls starting work at 12 years of age as a busboy and waiter.

Frank wonders why his son is so eager to pursue a career in politics, but Brent says service is in the family’s DNA.

“My grandparents are off the boat. My father went to college on the GI Bill. I went to college and law school thanks to financial aid. So I think it’s really important to give back when you can. It’s a circle. The community helps you, and when you have a chance, that’s what you have to do,” O’Leary feels.

He started a food pantry in Sunnyside at the start of the pandemic which fed over 200,000 people, and has been involved in numerous civic groups for years, including Woodside on the Move and the Hunters Point Civic Association which he founded in 2012.

“I’m not a politician. I think of my run for Assembly as an extension of my community service,” O’Leary says.

“If I’m in office, I’ll have more resources to do the things I want to do, which is make sure people have good jobs, health care, food security, safe streets, and good schools. I’m an old-school, FDR Democrat. I want to give people the tools to empower themselves.

“My dad says, ‘Why do you want to be a politician? They’re all corrupt.’ And I told him that if I don’t run it will stay that way. I’m looking forward to seeing what I can do for our district.”