"I’ve been a community leader here for 12 years whereas many of my competitors just moved into the neighborhood." 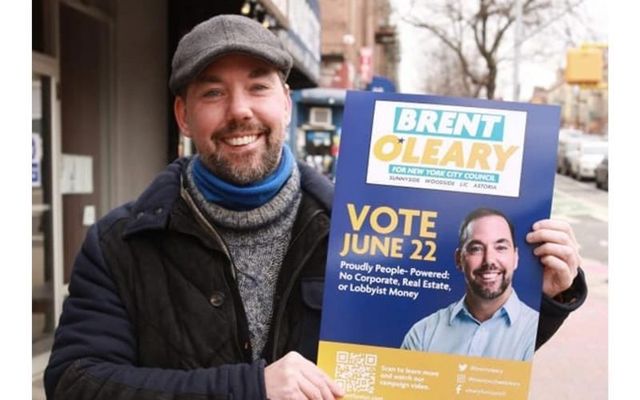 All politics is local, and Brent O’Leary, candidate for the New York City Council seat in Queens District 26 which partly encompasses the Irish enclaves of Woodside and Sunnyside, can certainly attest to that.

O’Leary, 51, was born and raised in the nearby Jackson Heights neighborhood and has spent the past 12-plus years back home in Queens serving the community where he came from through his involvement in a number of organizations working against over-development and for affordable housing, more schools and a better quality of life.

O’Leary, the grandson of immigrants from Co. Clare, tells the Irish Voice that Queens is in his blood and that several of his 14 competitors for the seat being vacated by term-limited Jimmy Van Bramer are recent arrivals more interested in their political futures than the needs of the community.

“When people see an empty seat coming up they’ll move into the neighborhood a couple of years before. No one wants to run against an incumbent.  I’ve been a community leader here for 12 years whereas many of my competitors just moved into the neighborhood,” O’Leary says.

“I’ve loved this place all my life. We’re phone banking every day, we’re door knocking every day.  We have energy and a great local team.  Every day is an adventure.”

O’Leary’s paternal grandparents were both from Co. Clare, Kilrush and Kilmihil.   His grandfather took part in the Easter Rebellion in 1916, fighting the British for Irish independence. Francis O’Leary was a member of the Irish Volunteers who, his grandson says, was captured by the British and sentenced to death.

“They gave him a choice – get on the boat tomorrow or we hang you, so he got on the boat,” O’Leary adds.

Francis came to New York and became a NYPD officer and met his wife Mary at a Clare dance. They lived in Sunnyside, and three of Mary’s brothers also emigrated from Clare to New York where they too became members of the NYPD.

O’Leary’s father Frank, a World War II veteran, bar manager and ticket clerk at Belmont Park race track, attended Hunter College on the GI Bill. He and his wife Laureen raised their three children in Jackson Heights, where O’Leary recalls starting work at 12 years of age as a busboy and waiter.

He worked his way through Trinity College in Hartford, Connecticut, spending one of his semesters at University College Galway.

“I loved it so much, such a beautiful place with great people. I saw a lot of the country and I even played on the UCG rugby club. That surprised me a bit because here college teams face other colleges, but there we would show up to play against some town’s team where the members would be 30 and 40 years old!” he remembers.  “But it was a great experience.”

After graduating Trinity College in 1992, where he learned Japanese and was voted best student speaker of the language, O’Leary spent a year in the Japanese countryside teaching English and further immersing himself in the language to become completely fluent, a skill he retains to this day.  He came back to the U.S. to earn a JD from Boston University Law School in 1996 and soon headed back to Japan and wound up as a senior associate in the Tokyo office of White & Case, one the world’s top law firms.

He returned to New York in 2003 to take a senior legal job at Bloomberg.  Now, while running for City Council, he works as a part-time consultant for the legal services provider Axiom, a position he says he’ll give up if he wins election.

O’Leary has spent years working in his community as a volunteer and advocate. He founded the Hunters Point Civic Association which is focused on quality of life issues in the neighborhood; he’s also board president at Woodside on the Move which provides services to tenants and schoolchildren.  He works closely with the Hour Children group founded by Sister Tesa Fitzgerald to aid incarcerated and formerly incarcerated mothers and their children.

“Sister Tesa is a good friend of mine. The recidivism rate for women who go through her program is four percent compared to an average of 30 percent.  It really shows that when you give people help in housing, job training and health care, you can reduce crime significantly.”

O’Leary supports last year’s $1 billion cut to the NYPD’s budget to bring it to $5 billion, and using the saved funds for crime prevention measures.

“We want to make sure there are no crimes of poverty, which is why living wage jobs and affordable housing are so important,” he says.

“I come from a police family. The biggest enemy of a good police officer is a bad one…the vast majority are good.  We have to make sure that people have the right temperament to become police officers, that they are trained in conflict resolution and that they are given the resources of mental health counseling and other things they need.”

The 26th District, O’Leary says, has always been working class, but rising rents and real estate prices are making it unaffordable. The housing issue is one he particularly wants to zero in on if elected.

“We have to work on making truly affordable housing. I’m for responsible development that is community led, which is why I opposed Amazon coming to Long Island City. They would have taken public land, and as the richest company in the world they can afford to pay for their own land,” O’Leary says.

“Amazon would have gotten $3 billion in tax subsidies. They should pay their own taxes. If not the tax gets pushed back on to the local working class people.”

The Amazon Long Island City deal brokered by New York Governor Andrew Cuomo and Mayor Bill de Blasio collapsed in 2019, but there are new proposals for the land that O’Leary says he can get behind – 50,000 jobs for locals, three schools, affordable housing and other attractions “that will benefit our community first and foremost,” he adds.

O’Leary and six of his competitors received the endorsement of Congresswoman Alexandria Ocasio-Cortez’s Courage to Change political action committee.  Her congressional district encompasses two-thirds of District 26, so O’Leary considers the nod “significant.”

What O’Leary says he wants the voters to really know is that he’s “walked the walk” in the district as the “only candidate who has served the community for so many years.  I have the track record, I work hard and I get the results.”

His neighborhood is bouncing back from the devastation of the pandemic.  O’Leary founded a food pantry at the Mosaic Church in Sunnyside which served over 150,000 locals who were food insecure during the worst of Covid-19.

“It was incredible the way people just came together to support the pantry. I asked Mosaic if we could use their church and the pantry has been going on for more than a year now.  It’s what people do around here – support each other.”

O’Leary says he’d be “proud” to become part of the City Council’s Irish caucus, as Van Bramer is.  He’s a member of Irish American Democrats who worked on President Obama’s campaigns for the White House, and the first Sunday of every March he spends at the St. Pat’s for All parade in Sunnyside co-founded by his friend Brendan Fay.

“You know,” O’Leary adds, “I basically consider myself an old school Irish meat and potatoes Democrat. It’s my job to listen to what the neighborhood needs and give it to them.”