Lieutenant John Downing, Firefighter Brian Fahey, and Firefighter Harry Ford perished in the blaze at a hardware store in Astoria, Queens, on June 17, 2001. 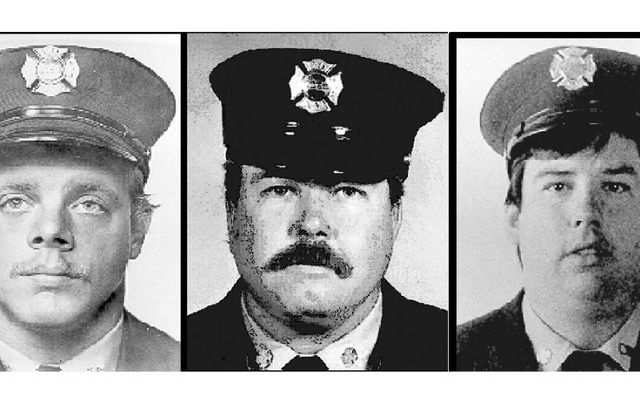 The widows of three Irish-American firefighters who tragically died in a five-alarm fire in Queens in 2001 have gathered to mark the 20th anniversary of their deaths.

Lieutenant John Downing, Firefighter Brian Fahey, and Firefighter Harry Ford perished in the blaze at a hardware store in Astoria, Queens, on June 17, 2001.

Known as the Father's Day Fire, the blaze caused almost a dozen further career-ending injuries before it was finally brought under control.

On Thursday, Denise Ford, Anne Downing, and Mary Fahey gathered at St. Sebastian Roman Catholic Church in Woodside to pay tribute to their fallen husbands on the 20th anniversary of their deaths.

They also returned to the site of the blaze at Long Island General Supply Co. On Astoria Boulevard, where they laid a wreath for the three firefighters.

Members of the FDNY also laid wreaths at Long Island General Supply on Thursday to honor the fallen veterans.

FDNY Commissioner Daniel Nigro attended the ceremony in Astoria on Thursday and said that a plaque would be erected at the site of the former hardware store as a permanent tribute to the three firefighters.

Addressing the ceremony, he said that it was a tragedy that eight children were left without their "beloved" fathers and that the FDNY would always take care of the families.

"Mary, Anne, Denise — you epitomize strength and courage. You raised wonderful families, and know that you and your families will always be in our hearts," Nigro said.

Today we remember FDNY Firefighters Harry S. Ford, Brian D. Fahey, and John J. Downing who made the supreme sacrifice on June 17, 2001, on a tragic day that has come to be known within the Department as the Father’s Day Fire. Read more: https://t.co/fJQD9K9OYf pic.twitter.com/cWlfE4UpK4

The three widows have formed an unbreakable bond over the past two decades and have helped each other mourn for their late husbands.

"It’s absolutely through tragedy that I gained these beautiful sisters," Anne Downing told the New York Post. "From that day on, they were there for everything."

Downing, who was born in Ireland, told the Post that Fahey and Ford helped her get through the pain of losing her toddler son Michael to neuroblastoma two years after the Father's Day Fire.

"We’re the best of friends. Honestly, it’s just so beautiful," Downing said, reflecting on what she described as a "double tragedy".

Anne Downing also said that she planned to visit Ireland with her husband the week after the fire and that June 17, 2001, was his last shift before he took annual leave.

John Downing, 40, and Harry Ford, 50, were killed when an explosion caused a wall to collapse on top of them. Brian Fahey, 46, died when the floor he was standing on caved in, causing him to plummet to the basement. His body was recovered several hours later.

Mary Fahey recalled the moment when she learned of her husband's fate, saying that he had told her what to expect if an FDNY chief ever called to the door.

She said that her brain began "imploding" as soon as the chief introduced himself and said that her three-year-old twins and eight-year-old son had let out an "indescribable scream" when she told them the news.

"It was a scream that I just can’t even … like a wounded animal in the forest," Fahey told the New York Post.

Meanwhile, Harry Ford's two sons, aged ten and 12, had hung up Father's Day cards for when he got home from work. By chance, he had called home from the fire station before going to tackle the blaze and asked to speak to his two boys.

Denise Ford said that telling her two sons about his death was the toughest moment of her life.

The three widows said that Father's Day is always difficult and that they always try to make the day special.

The fact that the fire took place on Father's Day resulted in a huge wave of public sympathy at the time. Charities were set up throughout New York City to offer support to the families of firefighters injured or killed in the blaze, raising more than $7 million - an unprecedented amount of money pre-9/11.