2021 St. Patrick’s Day parade rescheduled for Sept 18 with thousands of dollars to charities at an unmasked luncheon. 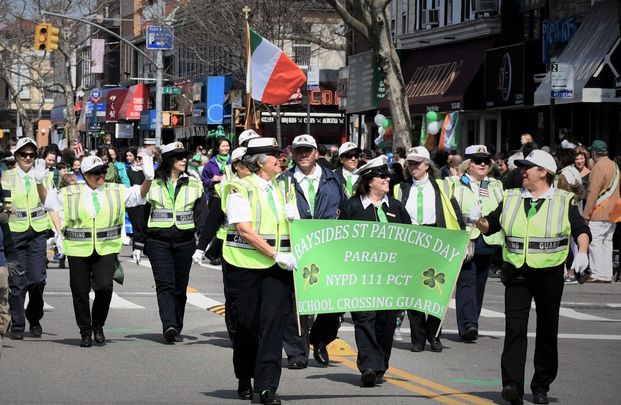 Goodbye to fist pumps and elbow bumps – hugs and handshakes were the order of the day last Saturday at a luncheon hosted by the Bayside St. Patrick’s Day Parade Committee in Queens, where a group of fully vaccinated, unmasked attendees – about 40 – enjoyed each other’s company in person and heard the news that Bayside will host its postponed 2021 St. Patrick’s Day parade on Saturday, September 18.

It will be a live event, taking its usual place on Bayside’s Bell Boulevard where the parade celebrated its inaugural year in 2018.  The 2020 march was canceled because of Covid-19 and the same held true for March of 2021, but organizers were determined that with the easing of pandemic restrictions in New York as more people get vaccinated, their parade wouldn’t be sidelined for two years in a row.

A permit has been applied for and is on track for approval, with the local NYPD precinct and the Department of Transportation having the date saved for the event.  And the local Irish community is excited to celebrate St. Patrick’s Day six months later, halfway to March 17, 2022.

“There’s a lot of support for having the march in September.  The businesses are very happy about it too,” McLoughlin said.

Those in attendance at the lunch were relieved to be gathered together as they were in the days before Covid-19 brought the world to a screeching halt.

Mary McCauley, the parade’s vice president and a native of Skryne, Co. Meath, is done with elbow salutes for good, she told the Irish Voice.

“Oh forget that.  This is an awesome feeling to be in a room with people again,” said McCauley, a former president of the Queens County Ladies AOH who immigrated to New York in 1962.

“The whole point of life is going out and meeting up with people, family and friends but of course we had to be very careful this past year.  This isn’t my first time socializing since Covid; I’ve been all over the place. I kind of never stopped going out.”

McCauley, who’s planning a trip to Ireland in August, isn’t a Covid denier.  All her outings were masked – “masks are so important,” she stressed – and she felt more free to venture out in public after she became fully vaccinated. 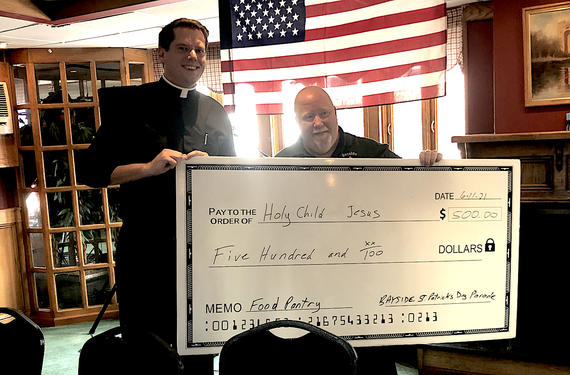 The Bayside St. Patrick’s Day Parade Committee hosted a raffle earlier this year which raised thousands of dollars for worthy causes, and the funds were distributed on Saturday to the Ciara Greene School of Irish Dance, the Kevin Bell Repatriation Trust, Our Lady of the Blessed Sacrament School and the food pantries of Holy Child Jesus and St. Kevin’s, both of which served dozens of local families during the pandemic.

Bayside will likely not be the only community holding a six months delayed 2021 St. Patrick’s Day parade.  The 44th annual Mid-Hudson parade in Greenwood Lake, New York is confirmed for Sunday, September 19.

“The long delayed, but much anticipated parade and related celebrations promise to be the Hudson Valley’s premier fall events…let the post-pandemic, back to normal fun begin,” a note on the parade’s Facebook page says.

Annapolis, Maryland is set to march on Sunday, September 12, with a pre-party and post-party also confirmed, “contingent on current health regulations at the time…the city has reserved this weekend for these celebrations,” a note on the parade’s Facebook page says.

For information on the Bayside parade, visit baysidesaintpatricksdayparade.org, or the committee’s Facebook page of the same name.

This year’s grand marshal will be Eileen Flannelly Mackell, who was selected to do the honors in 2020.  The 2020 aides, Tommy Mulvihill, Joe Donovan, John Golden, Tom Golden and Father Chris Heanue, have also been re-nominated for 2021.