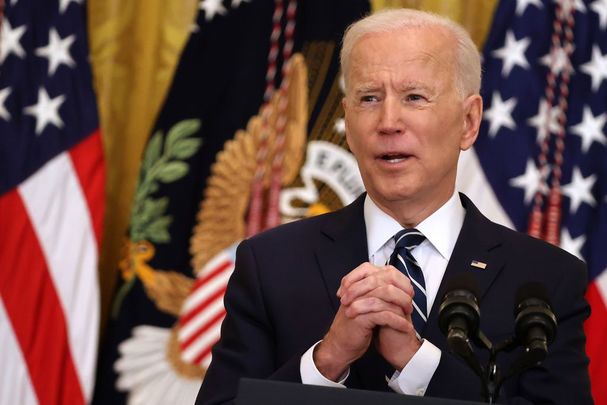 Economist Dr. Esmond Birnie has said Ireland's Famine was not due to direct policy by the British and President Joe Biden's comments on his own ancestors could cause trouble for Northern Ireland.

A Northern Irish economist, Dr. Esmond Birnie, has said that Ireland's Great Hunger was not caused by the British and that comments on this Irish history made by the US President Joe Biden could cause difficulties for his opinions are allowed to dictate policy.

In President Joe Biden's first press conference on March 25, 2021, he was questioned on the southern border of the United States and his plan to stop immigrants trying to enter the country. Biden replied by commenting on the fact that these immigrants were fleeing hardship in their home countries just like his own ancestors had during the famine.

The President said "When my great grandfather got on a coffin ship in the Irish Sea, expectation was, was he going to live long enough on that ship to get to the USA? But they left because of what the Brits had been doing”.

Over St. Patrick's Day, the United States government doubled down on their support for the Good Friday Agreement and retaining peace in Ireland including the prevention of a return of hard borders on the island following Brexit.

Dr. Birnie is a Senior Economist at Ulster University Business School and a Senior Research Fellow at Pivotal NI Policy Forum told the News Letter, a Northern Irish newspaper that Ireland's famine was not a deliberate act of policy by the British and the views expressed by Biden were his opinions only. He added that famines were prevalent in Europe at the time.

He told the News Letter “President Biden’s statement at the end of last week about those of his ancestors who had been victims of the 1840s Famine may display a limited interpretation of what was actually happening during the 1840s Irish Famine.

“This matters because there always has been a view that what actually happened was a deliberate act of policy by the British government- population reduction and clearance on a grand scale. It is not clear if the President actually subscribes to this extreme view but his comments may give comfort to those who do think that way.

“In fact, the UK government did not introduce the potato disease to Ireland. At the same time as Famine struck the island of Ireland, it is worth remembering hundreds of thousands of people died - or emigrated - in the six counties which would become Northern Ireland.”

Dr. Birnie commented on the population of Northern Ireland (as it was then) which fell from 1.6 million to 1.4 million from 1841 to 1851, during the Famine years. The population only recovered to pre-famine numbers in the late 1990s.

He continued “No one should downplay the extent to which what happened in 1840s Ireland was a massive human and economic tragedy but famines were reasonably frequent occurrences in many parts of Europe well into the 19th century, for example, the ‘Great Hunger’ years in Finland in 1867-68. The Irish Famine coincided with a much less remembered famine in the Scottish Highlands.”

The top economist also said that Ireland at the time still had no welfare state and there was a limit to what the British could have done but added that is "not to deny that more should have been done”.

Dr. Birnie said “As a private citizen Mr. Biden is entitled to believe whatever he wants about his family history but Northern Ireland could face problems if he allows those beliefs to distort his approach to policy. I say this as someone who has argued that on balance his approach to trade and macroeconomic policy has the potential to be more beneficial to Northern Ireland than the policies adopted by his predecessor. That said, the President’s approach needs to be balanced”.