Politicians of varying persuasions have responded to the findings of the Ballymurphy Massacre Inquest which found all the ten victims to be innocent. 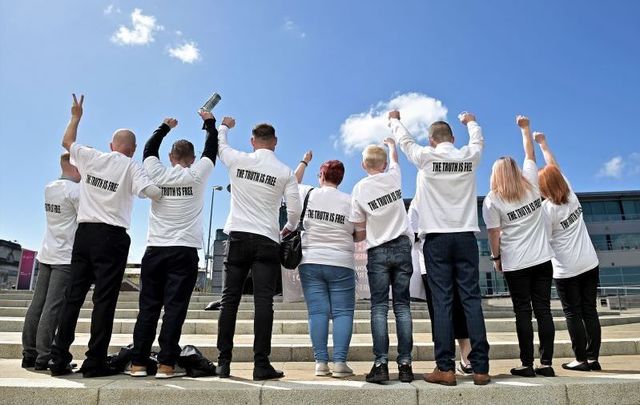 May 11, 2021: Relatives of victim Joseph Corr, wearing shirts that say 'The Truth is Free,' react after the findings of the Ballymurphy Inquest were released by the coroner at the Waterfront Hall in Belfast, Northern Ireland. Getty Images

On May 11, the ten victims of the Ballymurphy Massacre in Belfast were found to be innocent and their killings unjustified nearly 50 years after their deaths.

Throughout the inquest that began in November 2018, Justice Siobhan Keegan considered five incidents surrounding the deaths of 10 people that occurred in West Belfast between August 9 and 11 in 1971 during the Troubles.

Politicians in Ireland, Northern Ireland, the UK, and even the US have now responded to the monumental findings in which Justice Keegan declared the ten victims as "entirely innocent."

Michelle O’Neill, the Deputy First Minister of Northern Ireland and Vice President of Sinn Féin, said that the "truth has been set free."

Today the truth has been set free, this day belongs to the families ?? pic.twitter.com/9i2HtT6aGh

Arlene Foster, the First Minister of Northern Ireland and the head of the DUP who recently announced her resignation from both roles, said "justice must be blind."

Lots of lessons to be learned. Grief is grief. Justice must be blind.

Too many empty chairs across NI and unanswered questions.

Brandon Lewis, the Secretary of State for Northern Ireland, said the findings renew his ambition to "ensure that other families do not have to go through similar experiences in the future."

I deeply regret what the Ballymurphy families have had to go through. While I cannot change it, it renews my ambition to ensure that other families do not have to go through similar experiences in the future. My statement following today’s verdict?? https://t.co/Yzoy0HlTgX

Alliance Party MLA Naomi Long, the current Minister for Justice in Northern Ireland, called for an apology from the UK government.

UK Government now need to apologise for Army actions at Ballymurphy, says @naomi_long as she pays tribute to families' campaign.

Colum Eastwood, leader of the SDLP,  questioned whether or not Prime Minister Boris Johnson would continue to pursue amnesty for British soldiers in light of the findings.

If those murdered in Ballymurphy are innocent, then the soldiers who murdered them are guilty.

I challenge anyone who wants an amnesty for British soldiers to meet the Ballymurphy families with me and tell them to their face that they’re not entitled to pursue justice. pic.twitter.com/SmhUdJ0cSE

The day after the findings were published, however, UK Prime Minister Boris Johnson engaged in a phone call with Northern Ireland’s First Minister Arlene Foster and Deputy First Minister Michelle O’Neill. During the call, Johnson “apologised unreservedly on behalf of the UK Government for the events that took place in Ballymurphy and the huge anguish that the lengthy pursuit of truth has caused the families of those killed.”

In the Republic of Ireland, Minister for Foreign Affairs Simon Coveney said on the day the findings were published: "While we will need to examine the full detail of the Coroner’s statement, the principal findings have cast a tremendous new light on one of the darkest pages of the history of the conflict, and will come as an immense relief and vindication for the families who have maintained for decades that their loved ones were innocent and their killings unjustified."

Full response by Min @simoncoveney to the delivery of the findings of the Coroner in the Ballymurphy inquest today ? pic.twitter.com/ffvZIB1iVI

Taoiseach Micheál Martin told the Dail that victims' relatives have waited "a long, long time, nearly 50 years, for some sense of justice for their loved ones."

He added: “The Irish government has supported the Ballymurphy families for many years and we will continue to stand with solidarity with them."

In the US, Congressman Richard Neal, who sits on the Friends of Ireland Caucus, said the verdict is a "complete vindication" for victims and their families.

Having been a vocal supporter of the Ballymurphy families for many years, I welcome today’s ruling of innocence. The verdict is complete vindication for the families and their loved ones who have waged a courageous campaign for nearly five decades. https://t.co/48osPnqmTn