Members of the Ancient Order of Hibernians (AOH) will travel to Northern Ireland "to highlight American support for those fighting for legacy truth." 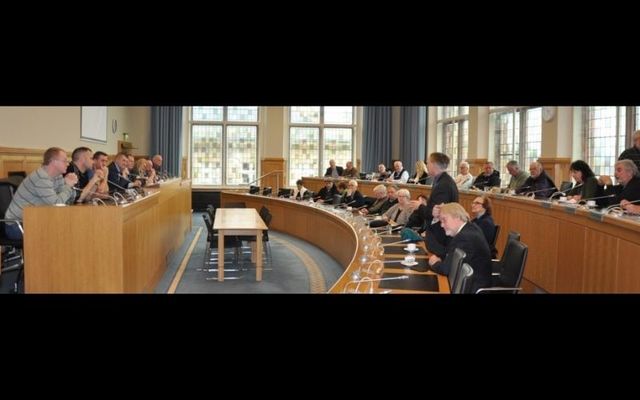 "The fact-finding mission follows one month after Hibernians spearheaded the passage of House Resolution 888, in which Congress said it ‘opposes any attempt by the British government to implement amnesty or statute of limitation laws that would end or inhibit investigations and prosecutions of crimes committed during the Troubles, including on Bloody Sunday.’

“In Tyrone, Hibernians will journey to the Battery Bar Ardboe where American citizen Liam Ryan was murdered by off-duty members of the British Army's Ulster Defense Regiment on November 29, 1989. Here they will join with family and friends of the long-time Bronx resident to launch a special Relatives for Justice case study in collusion in this murder, and call for an Ombudsman Report on the Royal Ulster Constabulary’s failure to investigate.

“The delegation will also meet Relatives for Justice, EALU (Escape), an organization supporting ex-prisoners, and Tyrone National Graves. Well-known Irish Republicans like Gerry McGeough, Malachy McAllister, and John Crawley will also be speaking to the delegation.”

The press release continued, “In Derry, the delegation will receive a briefing from SDLP Party Leader Colum Eastwood, and a formal civic reception at Derry’s Guildhall with the mayor and councilors. Hibernians will meet the Bloody Sunday families at the Museum of Free Derry and family members of Irish hunger strike martyr Patsy O’Hara and slain IRA Volunteer George McBrearty, at two of the city’s famed wall murals.

“Hibernians will travel to Belfast and visit the scene of the Springhill-Westrock Massacre, where on July 9, 1972, British troopers following a ceasefire shot five people, including Catholic priest Father Noel Fitzpatrick, Paul Butler, Margaret Gargan, 13, John Dougal, 16, and David McCafferty, 16. Their families have waited years for a new inquest, which is now threatened by new British amnesty proposals.

“This will be followed by a full overview of legacy issues from family representatives of the New Lodge 6, victims named in recent Ombudsman findings from South Belfast and Co Derry killings, and plastic bullet killings of children.

“One of the key events of the tour will be the presentations of more than $100,000 in Freedom for All Ireland grants to 15 approved applicants. The presentations will be made during a live webinar from the Houben Centre, despite the fact that loyalists recently disrupted a peace lecture by Irish Tanaiste and Foreign Minister Simon Coveney.

“The Freedom for All Ireland mission will spend its final two days in Dublin, where it will receive a briefing from Sinn Féin leader Mary Lou McDonald, an update on the Ireland’s Future campaign from Senators Frances Black and Niall Donnghaile, and a briefing by officials from the Irish Department of Foreign Affairs. Hibernians are also arranging briefings with senior party representatives from Fianna Fáil and Fine Gael.

“Author Robert Collins and Professor Ruan O’Donnell will provide the delegation a special preview of a new book titled "Noraid and the Northern Ireland Troubles 1970-94" which is expected to examine key chapter in Irish American history including the role and impact of AOH, during this period of conflict."

AOH Freedom for All Ireland Chair Martin Galvin said, "The fight for Irish legacy justice is at a critical point. The AOH and other Irish American organizations are believed to have played a crucial role in delaying the British proposals for an amnesty whitewash. However, Britain’s plans to take away basic rights to Inquests, ombudsman investigations, and civil action are still on the table.

“Victims’ relatives fear that Britain may impose this new injustice soon after the Stormont elections are over. We are bringing a high-level AOH-LAOH delegation to the north to highlight American support for those fighting for legacy truth.

"It is crucial now more than ever that we bring the facts back across America and do more nationally to support those still denied justice and freedom."