Simon Coveney was evacuated mid-speech for a "security threat" during a "Building Common Ground" event hosted by the John and Pat Hume Foundation in North Belfast on Friday. 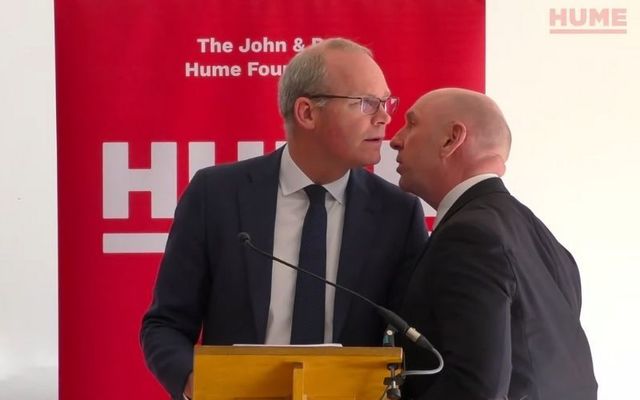 March 25, 2022: Ireland's Minister for Foreign Affairs Simon Coveney being told he has to evacuate during his speech for the John and Pat Hume Foundation's "Building Common Ground" event in North Belfast. Hume Foundation, YouTube

Ireland's Minister for Foreign Affairs Simon Coveney was evacuated mid-speech during a peace-building event in Belfast on Friday after armed individuals hijacked a van in the area and forced the driver to bring a device to the venue where Coveney was speaking.

Coveney was delivering a keynote address as part of the "Building Common Ground" discussion hosted by The John & Pat Hume Foundation at the Houben Centre in North Belfast on Friday.

A live stream of the event shows the moment that Coveney, mid-sentence, was told he had to evacuate.

"I'm afraid I have to leave," Coveney told the audience. "I hope I'll be back in a few minutes, you just have to understand that. Thank you."

Coveney was escorted from the area by armed gardaí and members of the PSNI, while other attendees at the event were also evacuated from the building.

Police set up a 400-meter exclusion zone around the center, with Coveney now said to be in a "secure location".

"There is a security alert. Everyone had to evacuate the centre," Tim Attwood, secretary of the Hume Foundation, the event organizer, told Reuters shortly after rushing out of the room.

A funeral that was being held in the adjacent building was also forced to evacuate.

The Irish Examiner reports that the van was hijacked at gunpoint on the Shankill Road. A canister was then placed in the van and the driver was forced to drive the vehicle to venue where the event was taking place.

The driver was in tears inside the venue after he managed to alert security, according to the Irish Independent. He also apologized for being forced to drive to the event.

Coveney said on Twitter that he was "saddened and frustrated that someone has been attacked and victimized in this way".

"My thoughts are with him and his family," Coveney wrote.

In Belfast with @Humefoundation to honour John & Pat’s legacy of peace for all communities. Saddened & frustrated that someone has been attacked & victimised in this way and my thoughts are with him & his family. My thanks to ⁦@PoliceServiceNI⁩ https://t.co/bs9LvTKBHW

Northern Ireland Secretary of State Brandon Lewis offered solidarity to Coveney and all those impacted by the attack.

I am aware of reports of an ongoing security alert in Belfast.

I am being kept up to date and I am in regular contact with the PSNI.

Solidarity with @simoncoveney and all those impacted.

DUP head Jeffrey Donaldson welcomed the condemnation of the incident and said "most people want to get on with their lives."

Good to see widespread condemnation of those behind the hijacking and security alert in North Belfast. Most people want to get on with their lives and have no truck with those who cling to violence.

Michelle O'Neill, vice president of Sinn Féin, said "Those of us committed to peace will not be deterred."

I condemn the actions of those involved in a security alert at an event focused on peace, reconciliation and finding common-ground. Those determined to cause instability & disruption will not succeed. Those of us committed to peace will not be deterred.

SDLP leader Colum Eastwood condemned those responsible for the attack, saying: "Worrying situation in Belfast today at the Building Common Ground event. These mindless thugs won’t deter the John and Pat Hume Foundation from carrying out their work to further peace."

Worrying situation in Belfast today at the Building Common Ground event. These mindless thugs won’t deter the John and Pat Hume Foundation from carrying out their work to further peace.

Later in the day on Friday, the Hume Foundation thanked everyone for their help throughout the day, and added that it "remains unwavering in our commitment to continue the journey of peace & reconciliation."

A big thanks to @simoncoveney @GaryDonegan, staff of the Houben Centre, the PSNI & the people of Ardoyne & Twaddell who showed such compassion & generosity today. The Hume Foundation remains unwavering in our commitment to continue the journey of peace & reconciliation #peace pic.twitter.com/GQFJtnuYxP