At least two US Senators and three US Congressmen have voiced their disappointment over the deportation of Malachy McAllister back to Ireland this week. 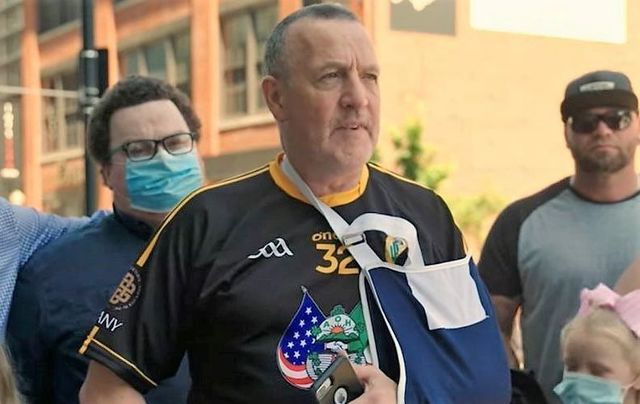 Malachy McAllister speaking with his supporters before he surrendered himself in New Jersey on June 9. Ancient Order of Hibernians, YouTube

Malachy McAllister was deported back to Ireland this week after living in the US for more than 20 years.

In the wake of the deportation of Malachy McAllister back to Ireland this week, more US politicians have issued statements denouncing the action while the Ancient Order of Hibernians (AOH), of which McAllister was a member, continues to fight on his behalf.

Read More: Malachy McAllister surrenders, will be deported to Ireland on Wednesday

The AOH has shared this video of Malachy McAllister speaking with his supporters before he surrendered himself at the Federal Building in Newark, New Jersey on Tuesday, June 9:

The day that McAllister surrendered himself, US Senator for the state of New Jersey Robert Menendez issued a brief statement which read in part: "This man’s deportation is shameful and will not make America safer."

The following day, the day McAllister was flown back to Ireland, US Senator for the state of New York Charles Schumer, who had previously lobbied alongside Sen. Menendez for McAllister to be permitted to remain in the US, issued similar sentiments that said in part that McAllister's deportation was "profoundly unjust."

Now, more US politicians have issued statements, along with the AOH who says they will continue fighting on McAllister's behalf.

US Representative from New Jersey Bill Pascrell said in a statement: “For over 20 years, Malachy McAllister has been a valuable part of our North Jersey community. His roots are in New Jersey. America is where he belongs.

"His deportation at Trump’s hand is a heartless decision and separates a man with medical issues from his family for no good reason that puts him and his family at risk. For years, my office has fought for a resolution to Mr. McAllister’s case. This is not the end. I will not give up trying to get Mr. McAllister back to the United States so he can remain here with his family permanently.”

Representative Eliot L. Engel, Chairman of the House Committee on Foreign Affairs, also said in a statement: “I am outraged that the Trump Administration is kicking Malachy McAllister out of the United States. He first fled Belfast in 1998 during the Troubles and came to this country fleeing attempts on his life and the lives of his family.  Now, despite strong bipartisan and bicameral advocacy from Congress about his model contributions to American society, Mr. McAllister is being forced from his home of more than two decades in the midst of a global pandemic and while he suffers from a broken collarbone.

“Malachy McAllister is a staunch supporter of the Good Friday Agreement and an invaluable member of the vibrant Irish-American community in New York and New Jersey. By following through with his removal, President Trump and Acting Secretary of Homeland Security Wolf are forcing Malachy to leave behind his American-born children and grandchildren and breaking with decades of bipartisan agreement across Republican and Democratic Administrations.

New York Congressman Pete King said in a statement: "[Malachy McAllister] has resided in the United States for over 20 years as a valued member of his community.

"It is regrettable that the Department of Homeland Security has chosen to ignore the life Mr. McAllister has built for himself and his family in the United States, along with his tireless advocacy for the Irish Peace Process. Instead, they only focus on an association he gave up long ago."

Martin Galvin, the Freedom for All Ireland chair at the AOH, said in a statement issued later in the week: "Despite anger at the injustice done to Malachy McAllister, Irish America must not overlook all that he won and what can still be won for him. Senators, Congressmen, Cardinals, law enforcement officials and so many Irish American leaders were not inspired to back a criminal. Over a quarter of a century he became, through no wish of his own, a living example of victims of British injustice. We must now use his case to fight the injustice of his deportation."

In conclusion, Galvin wrote: "Already Eliot Engel has become the first member of Congress calling for moves to reverse Malachy's deportation. Such a campaign could be the start of a bigger victory for Malachy McAllister and for justice."