The Ancient Order of Hibernians has slammed the deportation of Irish man Malachy McAllister, who has been living in the US for over 20 years. 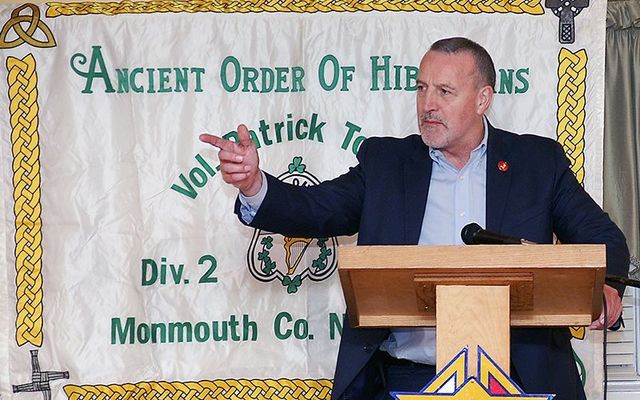 Refusing Malachy McAllister asylum after 24 years diminishes America's reputation as a land of refuge and new beginnings, says the AOH.

Editor's Note: The below is a statement issued by Neil Cosgrave, the head of the Political Education Committee for the Ancient Order of Hibernians (AOH), who has been lobbying for Malachy McAllister's deportation from the US to be halted. McAllister surrendered himself to authorities on June 9 and is expected to be flown to his native Ireland today, June 10.

Today, after a 24-year legal battle to seek asylum and gain permanent residency in the United States, the Department of Homeland Security has deported Malachy McAllister, a 62-year-old grandfather. Mr. McAllister was a New Jersey resident and respected leader in the Irish community leader who came to America after escaping an assassination attempt in Northern Ireland and has lived peacefully in the United States while legally seeking permanent residency.

“It is with profound sadness that we learn of the deportation of Malachy McAllister after a 24 year-long struggle to obtain permanent residency in the United States. In this action, we have been forced to say goodbye to a member and a brother; his American born U.S. citizen grandchildren have been deprived of their grandfather, the Northern Ireland Peace Process has lost a voice in America, the U.S. economy has lost an entrepreneur who created two successful tax-paying/job-producing businesses. However, the most significant loss of all is that we have lost part of the American legacy of the United States being a refuge from oppression and a land of new beginnings. “

“This is the second time that the promise of a new beginning has been snatched from Malachy McAllister. As a youth during the conflict in Northern Ireland, Malachy was arrested and tried in a court under judicial procedures that would not be recognized as due process under any modern system of justice.

Despite this, he served his time and was released early for good behavior. Malachy forswore violence and attempted to live with his family in peace in the land of his birth. However, loyalist militants acting in conjunction with British intelligence services sprayed the McAllister home with submachine gun fire, only miraculously missing Malachy's children and mother-in-law who were the only occupants of the house at the time.

Fearing for the safety of their children, Malachy and his wife fled Northern Ireland, seeking the refuge that America has traditionally promised the persecuted. Malachy legally filed for asylum and followed all immigration requirements.

However, Malachy's claim for asylum was denied on the grounds of his unjust incarceration, whose sentence he had fulfilled. No less a person than President Trump's sister, Judge Maryanne Trump Barry, summarized the injustice in denying Malachy and his family permanent U.S. Residency:

"I refuse to believe that 'Give me your tired, your poor, your huddled masses yearning to breathe free... ' is now an empty entreaty, but if it is, shame on us."

"We cannot be the country we should be if, because of the tragic events of Sept. 11, we knee-jerk remove decent men and women merely because they may have erred at one point in their lives. We should look a little closer; we should care a little more. I would ask — no, I would implore — the Attorney General to exercise his discretion and permit this deserving family to stay."

Sadly today, the fears expressed by Judge Trump Barry have come to pass, and the torch of liberty that the Statue of Liberty holds burns less brightly today.

If there is solace in this sad situation, it is that our Hibernian brothers and sisters have once again been faithful to their oaths and the traditions of the Irish to rally to the aid of a brother in distress. As President of the Ancient Order of Hibernians, I am both grateful and proud of your support. To our many friends in Congress and the Senate on both sides of the aisle who put aside party ideology to come together in the cause of justice, I thank you and salute your felicity to your office.

The history of the Irish is the history of resilience. There is no denying that we as a community have suffered a great setback today, one we shall not forget and use as motivation to continue to fight for justice in Northern Ireland and a fair and just immigration policy for the Irish.”

*Neil Cosgrave is head of the Political Education Committee for the Ancient Order of Hibernians.