Judge Maryanne Trump Barry, the sister of President-elect Donald J. Trump, once attacked the Federal Government her brother will soon lead for its terrorism laws. 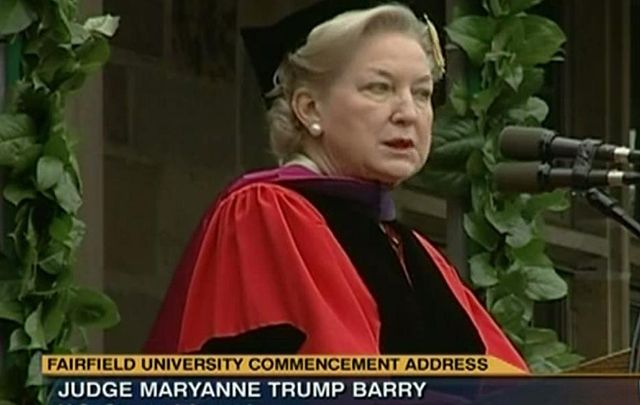 Judge Maryanne Trump Barry, the sister of President-elect Donald J. Trump, once attacked the Federal Government her brother will soon lead for its terrorism laws.

In a strongly worded judgment, the now retired New Jersey judge lambasted the Bush Administration for tying her hands in a 2006 case that involved the deportation of Belfast man Malachy McAllister for IRA activities.

McAllister and his two children faced deportation due to his past involvement in the Irish National Liberation Army (INLA), an offshoot of the IRA, something Judge Trump Barry argued should be excused due to the, “800 years of history that led Malachy to fight with his people to remove British rule and the persecution inflicted by that rule on Northern Ireland and on Malachy and his family."

McAllister’s involvement in the INLA led him to injure an RUC policeman in 1981, at the height of the Troubles, and he and his family subsequently fled Northern Ireland in 1988 after their home was attacked by loyalists. All of which, Trump Barry argued, meant the family was of no threat to the United States and should be permitted to stay.

"Congress's definition of 'terrorist activity," she wrote, “sweeps in not only the big guy, but also the little guy who poses no risk to anyone. It sweeps in Malachy McAllister [and] Malachy's children, Seán and Nicola, are swept in, too."

Were the McAllister family to be deported she added, it would mean the words carved on the Statue of Liberty would no longer mean anything, insisting, "I refuse to believe that 'Give me your tired, your poor, your huddled masses yearning to breathe free . . ' is now an empty entreaty, but if it is, shame on us.”

She concluded that, “I cannot find a way to keep the McAllisters in this country, and I have surely tried,” before adding, “We cannot be the country we should be if, because of the tragic events of Sept. 11, we knee-jerk remove decent men and women merely because they may have erred at one point in their lives.”

McAllister has always said he and his children, “fear that their lives will be in danger if they are returned to Northern Island.” McAllister has received numerous temporary stays of deportation since that time, the most recent of which was granted in April this year.

The case was taken up by 44 members of Congress, both Republicans and Democrats, who successfully argued that deporting McAllister would do no good and would run counter to the spirit of the Good Friday Agreement.

Congressman Joe Crowley said at the time, “The reprieve is not permanent at this point, but I am confident it is one that allows Malachy to work on a permanent solution to his problem.”

As for Judge Trump Barry, the now 79-year-old sister of the President-elect has since retired after close to 30 years of service to the judiciary.

Originally a homemaker for many years, Trump’s older sister was nominated as a Federal District Judge in 1983 by the Reagan Administration and promoted in 1999 by the Clinton Administration to the Court of Appeals for the Third Circuit.

Like her more famous younger brother, Trump Barry now lives part-time in Palm Beach, FL. Although the siblings are reported to be very close, the two are described as unlike in temperament with family friend and Trump delegate Robin Bernstein telling the Palm Beach Post, “She’s quiet. She doesn’t go to the balls. She’s everything you’d want a judge to be. She’s eloquent and articulate.”

During the GOP primaries earlier this year, she made the headlines after her brother’s rival Sen. Ted Cruz attacked her as a “radical, pro-abortion extremist,” but Trump Barry rarely courts publicity.

In 2011 she gave the commencement address at Fairfield University in Connecticut where she chose to speak about the ups and downs of her life, not just her successes. In a statement it is hard to imagine her brother making she told the graduating students, “My first job out of law school was as one of two women assistant U.S. attorneys in an office of 63 U.S. attorneys, and the first woman to do criminal work appearing only before male judges. Scared? Every day of my life.”

She also urged them not to see success merely as only professional, insisting, “Success can be something as simple as the warm feeling one gets if you see a stranger that you sense to be lonely and smiling at that stranger and having that stranger return your smile; it can be bringing a child into the world and raising a child to be a good man or a good woman.”

Unlike her brother, she also maintains a strong connection with their mother’s home, the Isle of Lewis in the Scottish Outer Hebrides. Last year she donated £150,000 (the equivalent of over $180,000) to Bethesda Care Home on the island and has been to visit her Scottish cousins more than 20 times. In contrast, her younger brother has visited the island only once since childhood.

Read More: Donald Trump's mother's Scottish hometown split over whether to support him