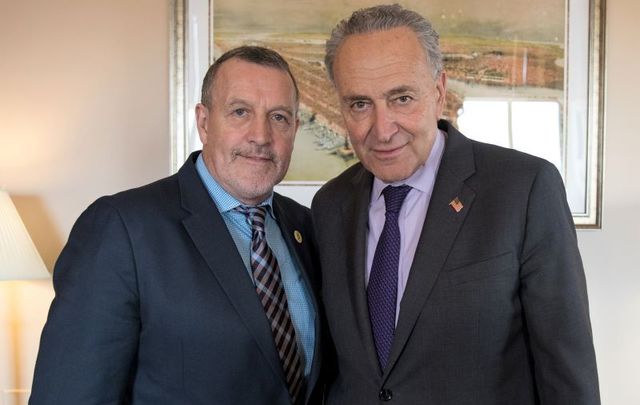 Senator Schumer and NJ Senator Bob Menendez issued a joint appeal to the US Department of Homeland Security last week on behalf of Malachy McAllister.

Read More: Malachy McAllister surrenders, will be deported to Ireland on Wednesday

“Mr. McAllister has been a valued member of the Irish American community ever since seeking asylum in the United States following an assassination attempt on him and his family during the Troubles. He is a father and grandfather to U.S. citizen children, a strong supporter of the Irish peace process, and a productive businessperson.

“Mr. McAllister has unfairly faced deportation for years and the looming threat has been tragically realized today.

“For years, I and a bipartisan group of senators and House members, including Rep. Pete King and Sen. Bob Menendez and Cardinal Dolan, have fought against Malachy McAllister’s deportation, supporting both administrative and legislative remedies to keep Mr. McAllister in the U.S., where he belongs. We have implored President Trump – and presidents before him – and U.S. DHS secretaries to intervene in McAllister’s deportation case.

“In the past, rational and just decisions to defer action have been granted. But, appallingly, not this time. Additionally, for ICE to ignore the critical injuries Mr. McAllister suffered from being hit by a car while riding his bike and to move forward with this unfair, unjust deportation is a terrible mistake.

“The deportation of Malachy McAllister is grave injustice by President Trump. And, sadly, it is part of President Trump’s reflexively hardline and cruel immigration policy towards would-be immigrants and asylum seekers that has caused untold pain and misery to countless people like Malachy McAllister, who, if allowed and granted some measure of mercy and common-sense administrative action, would only make America a better place.”

After noting McAllister's recent injuries he sustained when he was hit by a car, Senators Schumer and Menendez wrote: "On March 5, 2019, Senator Menendez introduced private bill, S. 653, which would make Malachy McAllister eligible for legal permanent resident status. A private immigration bill is an exceptional measure for individuals with extraordinary equities and is the only form of permanent relief available to Mr. McAllister. Efforts to pass this legislation continue in the Senate and House of Representatives.

"Mr. McAllister fled Belfast in 1988 after narrowly escaping an assassination attempt by pro-British Loyalist paramilitaries, who fired 26 shots into his house while his mother-in-law and children were at home. This attack compelled him to seek safety in Canada, and then the United States, where he promptly applied for political asylum. Unfortunately, Mr. McAllister’s application for asylum was denied. Yet, in recognition of the danger Mr. McAllister would face at home and his positive contributions to U.S. society, he has been granted deferred action from deportation in the years since.

"In 2006 the U.S. Court of Appeals for the Third Circuit expressed regret that it lacked the statutory tools to resolve Mr. McAllister’s case, but found that Malachy McAllister demonstrably posed no danger to the safety and security of the United States. Nevertheless, he was forever barred from asylum or any other relief as an alien found to have “engaged in terrorist activities” without regard to the circumstances under which his offenses were committed, or the length of time that had expired since those offenses were committed.

"At that time the Third Circuit Court made a plea to the Attorney General to find the means to provide political relief for Malachy McAllister and his children. In her concurring opinion in McAllister v. Atty. Gen, 444 F.3d 178, Judge Maryanne Trump-Barry stated:

It simply should not be that, particularly in circumstances such as those we now have before us, the individual and his individuality are largely, if not entirely, irrelevant, lost in a sea of dispositive definitions and harsh and complex laws. And we cannot be the country we should be if, because of the tragic events of September 11th, we knee-jerk remove decent men and women merely because they may have erred at one point in their lives. We should look a little closer; we should care a little more. I would ask — no, I would implore — the Attorney General to exercise his discretion and permit this deserving family to stay.”

"Although Mr. McAllister is the beneficiary of an I-130 Petition for Alien Relative filed by his U.S. Citizen son, Paul Gary McAllister, he is permanently precluded from adjustment of his status to legal permanent resident on the same grounds for which he was denied asylum and found removable.

"Mr. McAllister has developed deep ties to the Irish-American community in the Tri-State area of New York, New Jersey and Connecticut. He had been a member of the Ancient Order of Hibernians (“AOH”) for 20 years and served on its New Jersey State Board. He was elected Chairman of the United Irish Counties Association event in 2009, which hosted and recognized Former Senator George Mitchell for his work on the Good Friday Agreement. He was also appointed as an aide to the 2010 New York St. Patrick’s Day Parade Grand Marshall, New York Police Commissioner Raymond Kelly.

"In October 2013, an action was issued on behalf of Malachy McAllister and his children in the High Court in Belfast, McAllister v. Chief Constable PSNI, 2013 No. 099762, seeking redress against state agencies for their role in providing assistance to Loyalist terrorists in the targeting of Malachy McAllister for assassination. In 2014, the U.S. District Court for the District of Massachusetts ordered disclosure to the PSNI of interview materials pertaining to Winston Churchill Rea, who had provided an interview to Boston College as part of its “Belfast Project” academic oral history project. Mr. Rea was subsequently prosecuted on June 6, 2016 for, inter alia, the attempted murder of Malachy McAllister on October 2, 1988. We anticipate that the prosecution of this action may result in further disclosure of information concerning the attack on Malachy’s home and family, and the extent of the involvement of elements of the security forces in the planning of the gun attack.

"The collusion referenced in this report and subsequent disclosures has Mr. McAllister fearing for his life along with the fears for his health and well-being if he is deported during this pandemic. We are making this request because of our personal knowledge of Mr. McAllister who has lived in the United States for more than twenty years and has proven himself to be absolutely no threat to this country. While Mr. McAllister was involved in paramilitary activities in Northern Ireland more than two decades ago, as were so many others, he has been a strong proponent of the Irish Peace Process in accordance with the policies of the Clinton, Bush, Obama and Trump Administrations. During the time of the Good Friday Agreement Mr. McAllister played a leading role in urging the Irish-American community to support a negotiated peace and has continued those efforts.

"We respectfully request you stop his deportation and grant him indefinite deferred action. Thank you for your consideration."