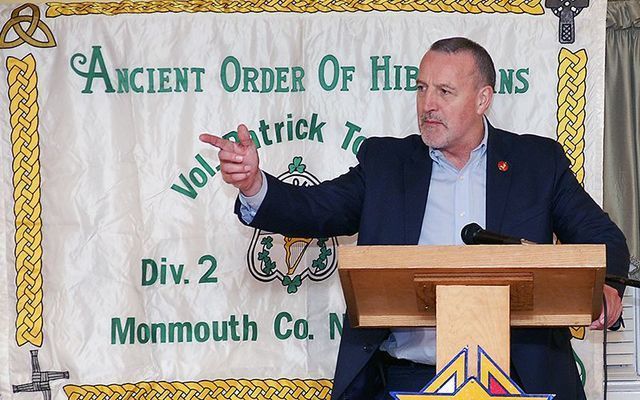 A bipartisan group of House members from New York and New Jersey have written a letter to the acting secretary of the Department of Homeland Security, Chad F. Wolf, asking for the suspension of a deportation order against Irish political prisoner Malachy McAllister, who has resided in the U.S. since 1996.

McAllister a resident of New Jersey, is due to be deported from the U.S. on June 5. His life in America has been in limbo for years due to deportation orders every six months which in the past have been temporarily lifted thanks to interventions from the Irish American community, politicians on both sides of the aisle, and even New York’s Cardinal Timothy Dolan.

“We make this request because of our personal knowledge of Mr. McAllister who has lived in the United States for more than twenty years and has proven himself to be absolutely no threat to this county and a valuable contributor to American society. Mr. McAllister has been a strong proponent of the Irish Peace Process in accordance with the policies of the Clinton, Bush, Obama, and Trump Administrations. During the time of the Good Friday Agreement Mr. McAllister played a leading role in urging the Irish American community to support a negotiated peace and has continued those efforts,” the letter from the four representatives to Wolf said.

“Mr. McAllister has sought political asylum in the United States based on past persecution he suffered and fear that his life will be in danger if he is returned to Ireland or Northern Ireland, especially with additional worries caused by the COVID-19 pandemic…

The Ancient Order of Hibernians is also once again marshaling its membership across the country to support McAllister’s cause.

“Our Hibernian oath calls us to action ‘if a brother should be defamed, or be treated unjustly, I will espouse his cause, give him the earliest possible advice and aid him when in distress.’  We need to give action to these noble words in the case of Brother Malachy McAllister, who is facing deportation this Friday, June 5,” AOH National President James McKay said in a letter to members last week, urging them to contact the White House via email at www.whitehouse.gov/contact, as the switchboard is not operating during the COVID pandemic.

In New York, the chairman of the AOH’S Freedom for All-Ireland committee Martin Galvin also pointed out the need for McAllister’s deportation to be suspended.

"Malachy McAllister has multiple grounds which should entitle him to full legal permanent residence under American law. He is a hardworking successful businessman and respected member of the Irish American community who should be allowed to work and raise his family in the country where he has lived for 30 years. He was a political prisoner decades ago in a war that is long over,” Galvin said.

"Malachy seems to be a political pawn in an old British game of criminalization, where anyone who dares oppose them must be criminals. We welcome this bipartisan initiative by Congressional representatives who have played a leading role in Irish issues and urge support for Malachy and his fight for justice."