A number of events will be live streamed from Derry this Sunday, January 30 as part of the "Beyond the Silence" programme marking 50 years since Bloody Sunday. 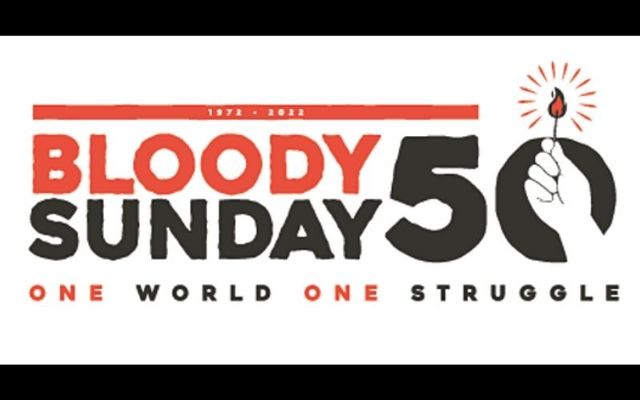 Join the Bloody Sunday families for “Beyond the Silence,” a public event featuring music, the spoken word, a light tribute, and some very special guests this Sunday, January 30.

The special event, organized by the Bloody Sunday Trust and the Museum of Free Derry, will be live streamed on YouTube and right here on IrishCentral from 3:45 pm Irish time / 10:45 am EST on Sunday, January 30:

A number of events are scheduled for Sunday to commemorate the 50th anniversary of Bloody Sunday when, on January 30, 1972, British soldiers shot 26 unarmed civilians in Derry, Northern Ireland during a protest march against internment without trial organized by the Northern Ireland Civil Rights Association (NICRA).

13 people were killed that day, while another man died a few months later due to his injuries.

At 9:15 am this Sunday, there will be a Families’ Walk of Remembrance beginning at Creggan Shops and making its way to Rossville Street, retracing the route of the original Civil Rights march. The Bloody Sunday Trust says the walk is principally for family members and has asked members of the public who wish to show their support for the families to do so in a responsible, socially-distanced way.

Afterward, Taoiseach Micheal Martin will meet members of the families privately in the Museum of Free Derry.

A Memorial Service will be held at 11 am Irish time / 5 am EST at the Bloody Sunday Monument, where the Taoiseach will lay a wreath.

During the Beyond the Silence event at Guildhall Square, a specially recorded message from President of Ireland Michael D. Higgins will be shown for the first time, broadcast on a large screen as well as live streamed.

Then, at 4 pm Irish time / 11 am EST, “Beyond the Silence” will be hosted by actor Adrian Dunbar and will feature tributes to the victims, musical and public performances.

Derry’s Guildhall Square will fall silent at the precise time when, on January 30th, 1972, British paratroopers opened fire on civil rights marchers in the Bogside.

The full programme of commemorative events can be seen at BloodySunday50.com.