IrishCentral's Paddy Clancy recalls his memories of working as a journalist in the Bogside on Bloody Sunday 50 years ago. 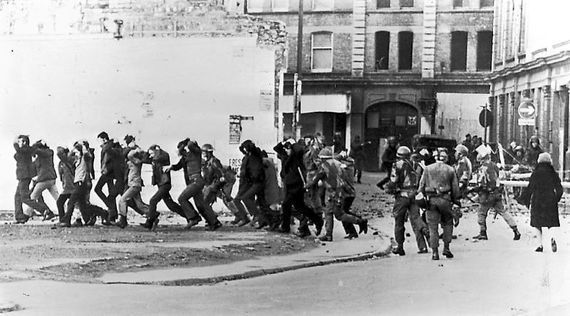 Sunday, January 30, is the 50th anniversary of the carnage of Bloody Sunday in Derry in 1972.

I was there, and still vividly recall two crucial aspects of the most awful historical event I have ever reported.

The memory of parish priest Edward Daly crouched and waving a blood-stained white handkerchief is still fresh after 50 years.

Daly, who later became bishop of Derry, was seeking protection from fire for a small group of men carrying the body of 17-year-old victim Jackie Duddy.

I didn’t know then, but it later became clear in published accounts that the blood was from the handkerchief Daly used as he attempted to treat young Duddy’s wound.

Duddy was the first fatal victim of an attack on an unarmed community by soldiers of the First Battalion, Parachute Regiment, of the British Army.

Just as vivid now as the memory of the blood-stained handkerchief are the blatant lies told to me and other news people by Britain’s two most senior soldiers at the scene less than an hour after one of their troops shot Duddy dead.

One of them was General Robert Ford, Commander Land Forces Northern Ireland. The other was Colonel Derek Wilford, the officer directly in charge of the Paras on the day.

Both were emphatic the soldiers had been shot at from within the Bogside before returning fire.

So convincing were they that their troops had only been returning fire that there were references in some earlier editions of the British papers – the editions that reached Ireland – of a gun battle in the Bogside.

Of course, there was no gun battle.  But because of the lies of the paras, their military leaders, and the subsequent whitewash of the Widgery Inquiry, the full truth took a long time to emerge.

The Saville Inquiry, which succeeded the discarded Widgery probe, listened to 1,000 witnesses and cost £200 million in a 12-year investigation to officially record in 2010 what everybody in Derry knew.

Saville found the killings of 14 people, and 15 others injured, were “unjustifiable” and carried out by paratroopers who had lost control and then concocted lies in an attempt to hide their acts.

Finally, the British government was forced to apologize to the people of Derry. David Cameron, who was prime minister at the time, said in the House of Commons that on behalf of his government and country he was “deeply sorry.”

However, an apology is as far as Britain has gone.

Institutional Britain is still circling the wagons. Nobody has been punished for the onslaught by the Paras in the Bogside area of Derry.

Ford, who shouted “Go on one para, go get them” as his troops charged in, later was awarded Knight Commander and Knight Grand Cross of the Order of the Bath, created in 1725 to honor chivalry.

Relatives of victims are taking legal action over British decisions not to pursue criminal cases against five of the ex-servicemen involved.

One paratrooper, who has been called Soldier F, was charged with two murders and five attempted murders on Bloody Sunday, but one victim’s family is seeking a judicial review of a decision by Britain’s Public Prosecutions Service that he should not stand trial.

Although the courts have granted the ex-soldier, now aged in his seventies, anonymity, SDLP leader Colum Eastwood, using parliamentary privilege, named him in Westminster in July.

My assignation on Bloody Sunday was a place behind a British Army barrier at the bottom of William Street.  A colleague was placed with the marchers.

The only victim I saw was Jackie Duddy. His body was being carried about 50 meters away when I peered around the corner of William Street into Rossville Street.

Duddy’s niece, Julieann Campbell, has published a book to coincide with this coming weekend’s reflections and commemorations of the tragedy 50 years ago.

Campbell’s book is called Bloody Sunday: A New History of the Day and Its Aftermath By the People Who Were There.

Campbell, an award-winning writer and poet, wasn’t even born on Bloody Sunday. But she told The Irish Times her uncle, a young boxer who went on a peace march and was shot by soldiers, was the inspiration for her life devoted to telling the story of Bloody Sunday.