Julieann Campbell's "On Bloody Sunday" vividly transports readers to the streets and homes of Derry City on January 30, 1972. 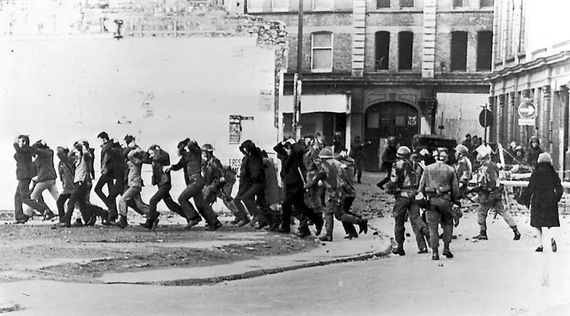 A poignant new book uses witness testimony and personal reflection from more than 110 people to tell the tragic story of Bloody Sunday like never before.

Julieann Campbell's "On Bloody Sunday" vividly transports readers to the streets and homes of Derry City on January 30, 1972, when soldiers with the British Army's Parachute Regiment opened fire on a crowd of unarmed civil rights protesters in the Bogside area of the city, killing 13 marchers. A 14th marcher would die months later from his injuries.

Cambell's book is a collection of rare personal accounts of Bloody Sunday that speak directly to the reader, taking them inside the minds of the people who experienced the trauma first-hand.

Campbell is the niece of Jackie Duddy, the 17-year-old who became the first person to be killed on Bloody Sunday.

Images of Fr. Edward Daly waving a handkerchief as he led a group of men carrying Duddy's body from the Bogside were broadcast around the world and later became synonymous with Bloody Sunday.

Hugh McMonagle, who was amongst those carrying Duddy's body, gave a never-before-published account of his experiences of Bloody Sunday for Campbell's new book.

"I have seen wars on the TV, but that gun battle on that day on Chamberlain Street scared the hell out of me. We were walking and could hear the bullets whizzing past us," McMonagle said in his personal reflection.

"I shouted at a soldier to do something, and his reaction was to clap his hands. To this day, I still hear that."

Joe Friel, then 20, who was shot and wounded as he tried to make his home on January 30, 1972, spoke of the "sheer unadulterated terror" on people's faces.

"The crowd was squealing, crying, roaring, and shouting. I saw sheer unadulterated terror on people's faces. I froze momentarily, then ran back towards the Rossville Flats to home. There were so many people packed into the doorway I couldn't get in. I could still hear shots being fired, getting louder."

Friel added that he had a clear memory of people falling to the ground as he crossed Rossville Street and attempted to make his way to Glenfada Park. He also described the moment he was shot, stating that he initially felt "a slight blow to the body".

"My first thought was that I had been hit by a rubber bullet, I couldn't take in that I had been shot. I looked down and could see blood. Within a second or two, a big gush of blood came out of my mouth. I shouted, "I'm shot, I'm shot!".

Joe Mahon, who was injured by a bullet that killed William McKinney, spoke of the heartbreaking guilt he experienced for not warning Jjim Wray to stay still.

"I have a guilt - I never shouted to Jim Wray to lie still and that's what really has been in the back of my mind all these years. I saw the para approaching, and I didn't warn Jim Wray, and they murdered him. I felt like a coward. I should have told him to keep still. They can't say Jim Wray was throwing stones or armed; he was on his stomach," Mahon reflected.

Wray was already gravely injured and lying on the ground when he was shot in the back from close range.

It was announced last year that proceedings against Soldier F had been halted and that he would not stand trial over Bloody Sunday. The families of the victims are currently awaiting a High Court ruling on the decision.

Patsy O'Donnell recalled the moment he was shot in a gripping piece of witness testimony for Campbell's new book.

"I saw soldiers and, just at the corner, there was a woman crouching behind the fence. I saw a soldier take aim in my direction and I threw myself on top of her and behind the fence as low as possible. I heard the crack on the wall behind me and looking round I saw a hole in the wall, and I saw the top of my coat torn and I realized there was something wrong with me. I said to the woman, 'I'm hit'."

The accounts are intricately interwoven and provide an accurate recreation of the chaotic atmosphere of that infamous day, leaping from witness to witness as they describe their own experiences in detail.

Campbell told the Irish News that the book represented the last opportunity for many witnesses of Bloody Sunday to tell their own personal stories.

"This may be the last chance for a lot of them to have their say," she said. "In that respect, it was a huge responsibility for me."

She said that the voices of those most affected by the tragic events of Bloody Sunday were "long overdue" because so many testimonies have been lost in "the din of 'official' accounts".

Campbell said that she hoped the book would remind people to remember the "real people" who were affected by Bloody Sunday.

"Too often things are reduced down to simple labels, like Bloody Sunday or Ballymurphy. You forget those real people behind the stories and how the communities were affected."

Julieann Campbell's "On Bloody Sunday: A New History of the Day and its Aftermath by Those Who Were There" is available in all good book stores now.