IrishCentral Contributor Ed Nefasey looks at the events leading up to Bloody Sunday in 1972 Derry, and how they came to mark the end of Northern Ireland's Civil Rights Movement. 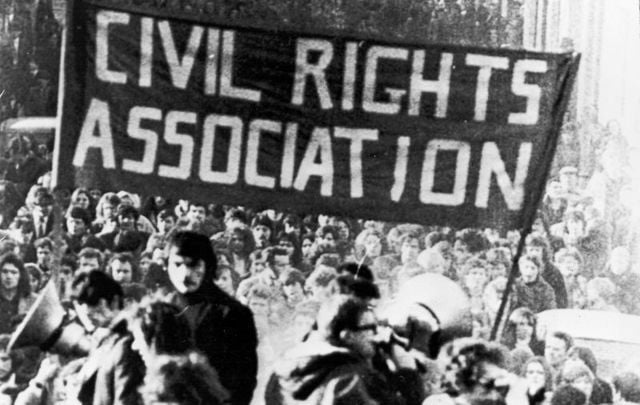 The year 1972 began with a re-energized civil rights movement in Northern Ireland because of the government’s internment program.

In effect since the previous August, the arbitrary arrest and detention of members of the minority community continued unabated. The number of internees approached 1,000. The Northern Ireland Civil Rights Association (NICRA) responded by holding nonviolent protest marches against internment.

One march took place in Magilligan, County Derry, just eight days before Bloody Sunday. The malevolent behavior of the British Army’s First Parachute Regiment foreshadowed what was to come on January 30.

John Hume was one of the leaders of the Social Democratic and Labor Party and a member of the Stormont Parliament at that time. Due to internment, he was boycotting parliament. His boycott, however, did not deter him from leading civil rights marches even though they had been banned by the Stormont government.

On January 22, he marched at the head of 2,000 peaceful, anti-internment protesters in Magilligan, where internees were being held in a World War II army base that was transformed into an internment camp.

The march route took demonstrators to the strand where they sang the U.S. civil rights anthem “We Shall Overcome.” It would be one of the last times the line - “Deep in my heart, I do believe, we shall overcome one day” - would be sung at a civil rights march during the Troubles.

Barbed wire was strung along the beach right down to the water’s edge, blocking the civil rights marchers’ path. First Parachute Regiment soldiers in riot gear stood behind the wire. An army officer ordered the protesters to halt because they were on Defense Ministry property. Hume challenged the officer-in-charge demanding the right to demonstrate against internment, while some marchers went into the water to get around the wire barricade.

What happened next is described in Paul Routledge’s book entitled "John Hume:" “Suddenly, the soldiers charged forward with batons waving, smashing everyone in sight.” They cursed at the protesters, who they called “Paddy’s” to dehumanize them. Soldiers also kicked them as they tried to flee on the sand.

When Hume re-grouped the marchers, the soldiers attacked again. This time they fired “rubber bullets and CS gas into the crowd,” driving people off the beach.

According to the University of Ulster’s CAIN chronology of Troubles events, Hume accused the soldiers of “berating, brutalizing and terrorizing demonstrators.” He said officers in the First Parachute Regiment would not listen to reason, and he acknowledged being frightened by the regiment’s intense hatred and unnecessary violence. He voiced concern that “someone will be killed” at the NICRA anti-internment rally scheduled for Derry city the following week.

His worry was justified. The First Parachute Regiment was the elite of the British Army. Authorities sent them to Derry to signal the hardline line that would be taken against nonviolent demonstrations, and the regiment was placed in charge of overall command to curb the upcoming march.

Five months earlier, members of the First Parachute Regiment sent a vicious message to the minority community in Belfast. They shot and killed ten people in Ballymurphy. This past year, in Northern Ireland’s longest-running coroner’s inquiry, Mrs. Justice Keegan exonerated the Ballymurphy victims finding they were “entirely innocent of any wrongdoing” and posed no threat to the soldiers who gunned them down without justification.

The First Parachute Regiment engaged in the same course of criminal conduct on Bloody Sunday, when tens of thousands of nonviolent demonstrators rallied on Derry city’s streets to protest internment. During a 30-minute period, soldiers unjustifiably shot and killed 13 protesters and injured 18, one of whom later died from his wounds. The British government attempted to cover-up the truth about this atrocity with the 1972 Lord Chief Justice Widgery Report. That report falsely blamed the deaths on the march organizers and unconditionally exonerated the soldiers.

The Widgery Report was scorned as a whitewash, and a new inquiry into Bloody Sunday was commissioned by the British government decades later. The 2010 Lord Saville Report found none of the victims posed a threat, and the soldiers acted without justification. The truth about Bloody Sunday was out and the guilty parties faced the spotlight. It had taken 38 years, but blame and responsibility for Bloody Sunday was finally placed on the First Parachute Regiment where it belonged.

In light of the Saville Report, then British Prime Minister David Cameron apologized on behalf of the government to the families of those killed for the pain, hurt, and lifetime of loss they had to live with. Speaking about the regiment’s conduct in Derry, he said: “What happened on Bloody Sunday was both unjustified and unjustifiable. It was wrong.”

Bloody Sunday ushered in the deadliest year of the Troubles. 495 people were killed in 1972, and nearly 3,000 more would die before the Good Friday Agreement fueled peace.

Bloody Sunday also brought Northern Ireland’s civil rights era to a close. Ivan Cooper, one of the march organizers, said: “Bloody Sunday destroyed the civil rights movement and opened up a path for the hardmen” of the IRA.

Civil rights leader Bernadette Devlin, the youngest woman ever elected to the British Parliament and a march participant, concurred with Cooper’s assessment. Christine Kinealy, in her book on the Troubles entitled "War and Peace," quoted what Devlin said about Bloody Sunday when interviewed by a newspaper decades later. Devlin called it the day “when the civil rights movement ended and the armed struggle began,” and said that day “was the point of realization for me that the penalty for demanding equal rights in your society was that your government would kill you.” The experience radically transformed Devlin’s beliefs. She was not alone in this regard.

Bloody Sunday in the United States galvanized the U.S. civil rights movement and led to the Voting Rights Act. In Northern Ireland, the hope and belief that nonviolent civil disobedience would lead to governmental change and reform was extinguished on Derry’s deadly streets on January 30, 1972. Bloody Sunday ended the civil rights movement and pushed society to the abyss.