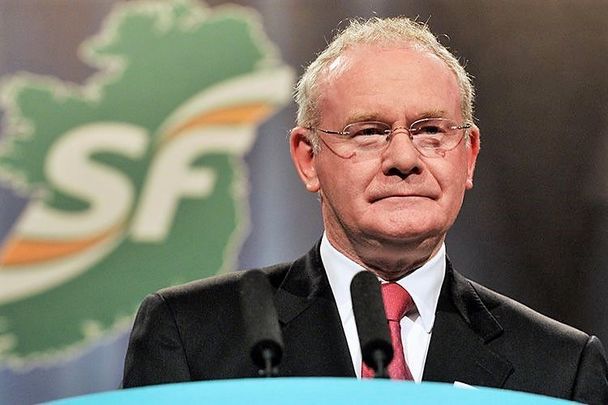 The walk will begin at the Irish Hunger Memorial at 290 Vesey Street in downtown New York City. Pre-walk registration and entertainment kick off at 10 am, followed by an official opening and remarks from Senate Majority Leader Charles Schumer at 10:30 am, with the walk to commence at 11:00 am.

McGuinness's son Emmett and widow Bernie are encouraging people to sign up for the NYC event:

Don't forget to register for the Chieftain's Walk on September 18th in NYC https://t.co/3P1oaGjPuc pic.twitter.com/HWHkhPgtRW

After the Chieftain's Walk, the Inaugural Martin McGuinness Peace Foundation Dinner will be hosted on Wednesday, September 21, at Manhattan Manor at 201 W 52nd Street in New York City. Gerry Kelly, Sinn Féin MLA for North Belfast, will be the special guest at the event.

You can RSVP for the Inaugural Martin McGuinness Peace Foundation Dinner to Amanda Reuschle at amacaluso@abgllaw.com or 631-777-6928.

Who is Martin McGuinness?

Martin McGuinness was born in Derry, Northern Ireland in 1950. He joined the Irish Republican Army in 1970 and in 1972, he was part of an Irish republican delegation who met with the British government in London. From that period onwards, McGuinness became one of the most prominent Irish republican leaders of his generation.

Appointed as Sinn Féin Chief Negotiator during the emerging Irish peace process in the late 1980s, McGuinness was instrumental in achieving an IRA cessation of hostilities in 1994. He also led the Sinn Féin negotiating team in the subsequent peace talks and in shaping the 1998 Good Friday Agreement, a key development in bringing an end to the conflict in Ireland and between Ireland and Britain.

In 2016, McGuinness developed amyloidosis, which led to his death on March 21, 2017. Tens of thousands of people attended his funeral in Derry. Among those attending were political leaders from across the world, including former US President, Bill Clinton. Memorials were also hosted in NYC and Washington, DC.

What is the Martin McGuinness Peace Foundation?

The Martin McGuinness Peace Foundation was launched by his family and friends at the Gasyard Wall Féile in October 2019 to celebrate his life and legacy.

The Peace Foundation celebrates McGuinness's life, work, and achievements as a leader, a political activist, and an international statesperson – promoting his aims, objectives, and progressive ideals of:

The Foundation says it is promoting these goals through an inclusive program of education, sport, debate, art, and culture, which is open to all. The Foundation aims to tell McGuinness's story and also to advance his goal of an agreed Ireland based on equality, inclusion, respect, and reconciliation.