What is the Irish Hunger Memorial in New York?

The Irish Hunger Memorial in New York City is designed with Irish stone, flora, and a centerpiece of an 1820s stone cottage transported from Ireland. 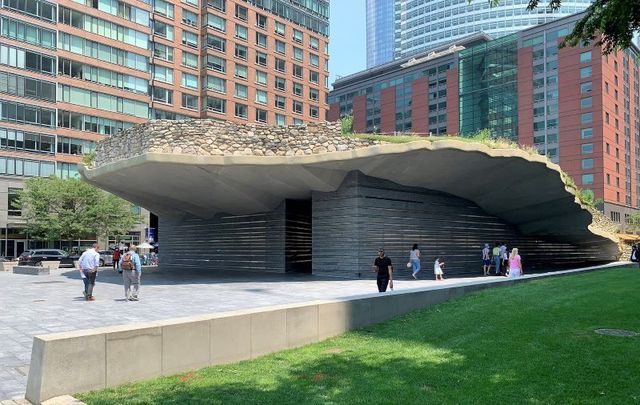 The Irish Hunger Memorial in Battery Park City in Manhattan, New York, is a reminder of those that lost their lives during the Great Irish Famine.

The Irish Hunger Memorial in New York City, designed by artist Brian Tolle, landscape artist Gail Wittwer-Laird and the 1100 Architect firm, was formally opened and dedicated in July 2002 after construction began in March 2001.

The memorial is intended to raise awareness of events of the Great Irish Famine, referred to as An Gorta Mór in Irish, in which over one million starved to death between 1845 and 1852, and forced millions of others to immigrate, many of them to New York, to start a new life.

The installation, located at the corner of Vesey St and North End Ave, represents a rural Irish landscape and includes a centerpiece of an 1820s stone cottage, transported from Ireland and donated to the memorial by the artist’s extended family, the Slacks of Attymass, Co Mayo.

The family donated the cottage to the memorial in the "memory of all the Slack family members of previous generations who emigrated to America and fared well there."

The memorial sits facing the Statue of Liberty and Ellis Island. It was officially opened by former Irish President Mary McAleese in 2002.

Stones from Ireland’s 32 counties are used in the hard landscaping of the memorial. Visitors can follow paths leading from the cottage to a viewing point on an elevated limestone plinth.

Along the base are bands of texts separated by layers of imported Kilkenny limestone. The text, which combines the history of the Great Famine with contemporary reports on world hunger, is cast as a shadow onto illuminated frosted glass panels.

Inside the garden, there is fallow potato fields and type of flora that can be found on the north Connacht wetlands. It is both a metaphor for the Great Irish Famine and a reminder that world hunger today is often the result of a lack of access to land.

The memorial is open from 11 am - 6:30 pm daily and visitors can take a self-guided tour using The Irish Hunger Memorial app.