Congregation at St. Patrick's Cathedral told "Martin McGuinness was one of those who had the courage and vision to see a path forward." 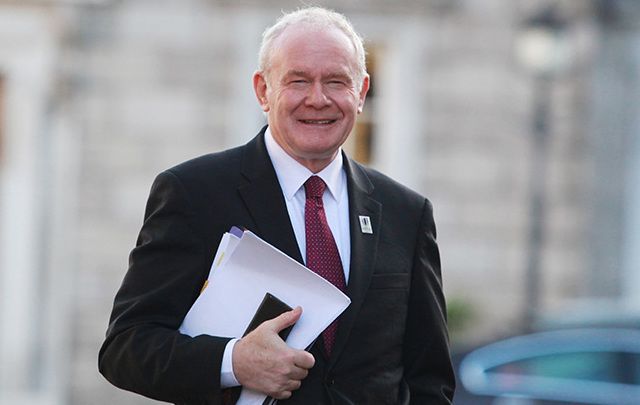 The life of the late Sinn Fein leader Martin McGuinness was celebrated on Monday evening at a month’s mind Mass at St. Patrick’s Cathedral in New York attended by more than 1,000 leaders of the Irish American community.

Northern Ireland’s former deputy first minister passed away on March 21 after a short battle with illness and he was remembered fondly once again by the Irish American community.

The mass also coincided with the 101st anniversary of the 1916 Easter Rising which ensured a large turnout to the cathedral on Fifth Avenue.  Among those in attendance were members of McGuinness’ family who traveled from Derry, Irish Consul General Barbara Jones, Oscar nominated film director and screenwriter Jim Sheridan, and a large contingent from the Derry Association of New York.

Monsignor Robert Ritchie presided over the sermon in which he described McGuinness as “a man of peace.”

The Mass also included a moving eulogy from former Senator George Mitchell who served as the independent chairman of the Northern Ireland peace talks which led to the Good Friday Agreement in 1998.  He spoke of how they first met in 1995 and how big a role McGuinness played in bringing peace to the island of Ireland.

Senator George Mitchell gave a eulogy and crowds turned out in New York at a Month’s Mind Mass for Martin McGuinness https://t.co/cIKm3iy3fD pic.twitter.com/j9GH1N5zgb

“Taoisigh Reynolds, Bruton and Ahern along with Prime Ministers Major and Blair all justifiably played their part, but the real heroes in the Northern Ireland peace process were the leaders of Northern Ireland themselves,” he said.

“At a critical moment in their people’s history they sought the courage and the vision to end the conflict which historians trace back for over 800 years. Martin McGuinness was one of those who had the courage and vision to see a path forward.”

“I believe all the leaders involved in the process of finding peace in Ireland respected Martin, even though they may have disagreed with him, and that helped keep the process alive even when there appeared to be no way forward,” Mitchell said.

“Without a doubt, his leadership was a major factor in the negotiations of the Good Friday Agreement and the peace that endures to this day.”

Mitchell added how the symbolic gestures of the former IRA commander showed his overall commitment to the peace process.  His leadership qualities were demonstrated by his ability to navigate politics in Ireland from violence to peace, he said.  While McGuinness made no secret of past membership of the IRA, he also showed his progressive side to enter into a power-sharing Assembly with Unionists.

“For me, the iconic images and memories of that whole process were the widely published pictures of Martin working closely with Ian Paisley and with the Queen of England, with whom he shook hands,” Mitchell said.

“Those photographs graphically represent the massive transformation that occurred in Northern Ireland as well as the whole of Ireland and the United Kingdom. They were made possible by years of effort.

“There were three major phases in Martin’s life -- conflict, negotiation and governing. Through it all there was one constant factor – leadership.  Martin McGuinness was a strong, courageous and effective leader. He was truly one of the most important figures in the modern history of Ireland.”

McGuinness spoke in January of this year of how his heart belonged in the Bogside of his native Derry, but he also had a deep affinity for the U.S. He made his last visit to the U.S. just a few months prior to his death as he visited St. Thomas’ University in Houston and Silicon Valley in California where he met a number of Irish American entrepreneurs.

A number of New Yorkers who were in the audience said why they felt it was important to attend and pay their respects to McGuinness.

“I think he was one of the truly great Irish leaders,” said Mike, an Irish American.

“I wanted to be here today because I feel he did a lot for Ireland in such a short space of time. He changed the country from a bad period into a good period and I feel he should be remembered for that,” he said.

On the anniversary of the Easter Rising, prayers were said in honor of those who fought for Irish freedom just over a century ago along with other appeals for the Irish community to be allowed fairer immigration.

The mass concluded with Cathy Maguire giving a rousing rendition of “Only Our Rivers Run Free” followed by the national anthems of both America and Ireland.

McDonald gave a reading in which she spoke of how there was “a time for war and a time for peace,” which accurately reflected McGuinness’ life. After the Mass she said how his passing is still being felt in Irish political life.

“The loss of such an influential figure, can only but affect our party and the whole of Irish politics. But we are here tonight to celebrate what Martin done for Ireland and the foundations he has laid for us to move forward,” she said.

McDonald said the legacy that the former Sinn Fein leader left was something that all of the Irish diaspora could be proud of, and that a new generation of Irish politicians could be inspired by the peaceful sentiments he expressed in the latter part of his career.

“Martin McGuinness has created a legacy that our party must live up to. For Irish and Irish Americans alike, he has inspired so many people and it is now up to the next generation to ensure the peaceful means he displayed are up held,” she said.