The recent return of the Mid-Atlantic Fleadh proves that the Living Tradition of Irish music is healthy and vibrant as ever. 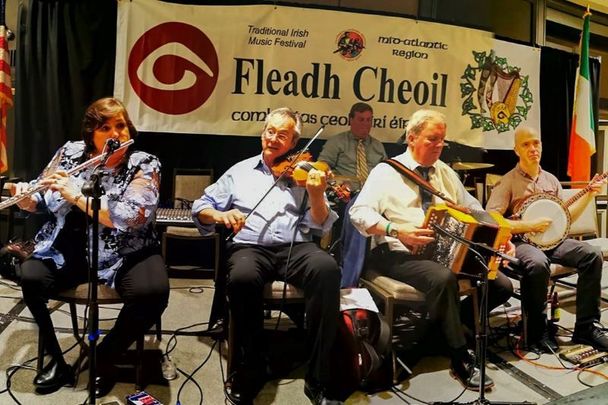 It was a very happy and truly significant occasion when hundreds of people gathered in the Hilton Hotel in Parsippany, New Jersey over May 6 through May 8 for the annual CCE Mid-Atlantic regional fleadh cheoil which was back in force after a two-year hiatus during the pandemic.

The challenges of music teachers and their students and Comhaltas organizers were huge in keeping an event alive that goes all the back to 1975 and the first local fleadh cheoil in the New York area in Mineola, Long Island.

A group of eight adjudicators from Ireland arrived late last week to join an array of local judges to make determinations among many competitors from Friday evening through Sunday to qualify winners, with the first and second place finishers eligible to go onto Fleadh Cheoil na hEireann this summer.  That All-Ireland Fleadh will take place in Mullingar, the birthplace of Comhaltas Ceoltoiri Eireann in 1951 from July 31 to August 7 where a delayed celebration of 70 years of CCE will be triumphantly celebrated.

Tunes permeated the corridors and nooks and crannies around the modern and spacious lobby bar operating as the fleadh village square all weekend. The sessions were dominated by many young people for whom the whole fleadh experience was created which is a very encouraging aspect, reflecting on the dedication and passion of that generation as well as the encouragement of their teachers, parents and the entire Comhaltas support system.

The older generation had the opportunity to enjoy themselves also on Saturday night at the gala banquet in the main ballroom. A crowd of just under 300 people reveled in being together once again as three new inductees to the Regional Hall of Fame were saluted. Deirdre Connolly, John Kennedy, and the late Dennis Gallery were all welcomed into an august group of musicians on the night.

All were poignantly eloquent in accepting the awards as Connolly and Kennedy spoke from the podium after introductions from the evening’s fear a tí, Paul Keating, (your humble correspondent) before their own musical performances with selected friends.

Gallery’s son Brian and his widow, Patricia Gallery, spoke on behalf of the late Dennis who left us in 2018, and a musical tribute was led by Brian and some of the bandmates who played with Dennis over the years.

A special presentation of a gradam comaoine (contributor) was bestowed on WFUV’s Kathleen Biggins in absentia also for her 35 years as host of A Thousand Welcomes.

For the first time, regional service awards for loyal, hard-working branch members were included at this occasion which added to the community spirit and volunteerism that is the bedrock of Comhaltas Ceoltoiri Eireann worldwide. Receiving their ceremonial certificates and medallions were Rose Conway Flanagan, Mary Higgins, John and Brigid Roarty, and Mitch Fanning. 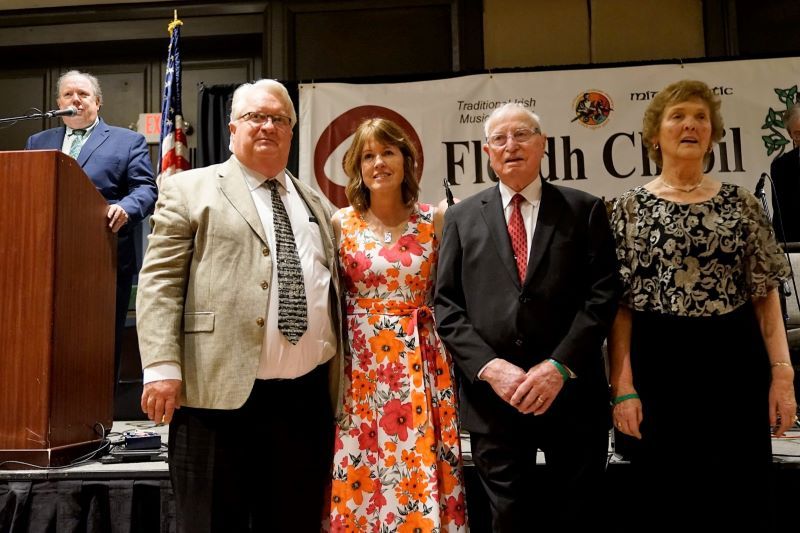 It was a particularly rewarding weekend for Fanning and the number of people from the O’Neill-Malcom branch based around Washington, D.C. who traveled up from the southernmost branch in the region established in 1995. Their educational youth program was given its start by Fanning a number of years ago through its summer school MADweek, and more recently an ongoing year-round program which he founded along with Lexi Boatright called the Baltimore-Washington Academy.

The success of those programs was manifest in the overall results of the competitions, which can be found online here, which also reflected the efforts of so many other teachers and students elsewhere.

The Saturday evening accentuated by the music of a truly outstanding ceili band led by Joanie Madden, John Nolan, John Reynolds, Jerry O’Sullivan, Brendan Dolan, and John Madden, and also Brian Conway who joined them later on stage. They delighted the set dancers for three hours with the best music you could imagine.

Once again, it is safe to say that the Living Tradition of Irish music is healthy and vibrant even after the pandemic.