Irish music is back! Mullingar to host 2022 Fleadh Cheoil after two-year postponement

As vaccinations kick in worldwide and restrictions start to loosen, Mullingar readies to host the 2022 Fleadh Cheoil. 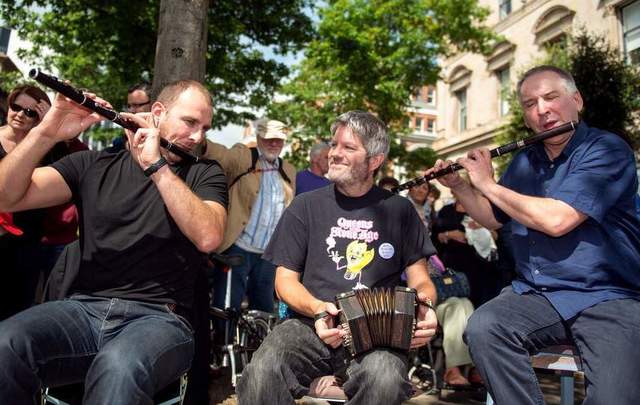 With over 700k visitor's in attendance at the 2019 Fleadh, the Irish traditional music and dance community is gearing up for some real-life festivities on a grand scale in Westmeath in 2022.

Going two years without running a months-long fleadhanna cheoil slate of events through the counties in Ireland and provinces of Britain and North America may have dispirited countless hopeful competitors aspiring for gold, silver, and bronze medals at the annual Fleadh Cheoil na hEireann which was on an incredible growth spurt over the past decade with new attendance records every year.

But the pandemic leveled everyone and everything and the culminating All-Ireland Fleadh that was to be held in Mullingar, Co Westmeath last August was canceled and never got off the ground this year either.

Covid-19 is taking a very slow leave of us with lockdowns stifling in-person events that need to qualify and host such a momentous festival that was calculated to draw over 700,000 visitors to Drogheda when it was last held in August of 2019 for the second year.

Hope springs eternal and as vaccinations kick in worldwide and restrictions start to loosen, it is time for some optimistic projections that we will once again be able to gather socially among one another and carry on our most valued traditions.

And for Comhaltas Ceoltoiri Eireann which has encountered numerous challenges in its seminal role as Ireland’s foremost cultural movement preserving and promoting traditional Irish music, song and dance for 70 years, it was time to send a signal that we aim to get back on track with that mission with social gathering in person.

And so CCE’s Ardchomhairle (Executive Council on which I serve as a North American representative) announced last weekend that once again an agreement with Mullingar’s Fleadh Executive Committee and Westmeath County Council to host Fleadh Cheoil na hEireann in August of 2022.

Like so many other entities in the Irish music scene, CCE adapted to the virtual stream over the past year or so, hosting music classes and special events to rally the membership of over 400 branches.

With the encouragement of generous Irish government funding supporting its mission annually, CCE is producing an ambitious FleadhFest program online for this summer.

Using social media platforms and the TG4 television channel in August, the Comhaltas banner will be flying high and offering encouragement and symbolic activities that presage once again the kind of celebrations that boost town and county hosts as well as the Irish economy which benefits significantly from it.

To give you a taste of the wonder that is Fleadh Cheoil na hEireann here are some highlights from 2019: