Chris O'Dowd, Sinead O'Connor, Hozier, and Niall Horan among Irish stars standing in solidarity with protests in US. 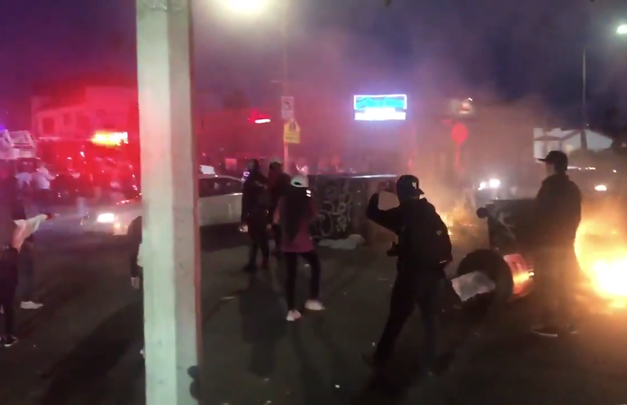 The horrifying murder of George Floyd in Minneapolis last week has convulsed our country and outraged all of us, including a number of Irish celebrities who are voicing their shock at how an alleged officer of the law could kneel on a defenseless man’s neck for close to nine brutal minutes.

Chris O’Dowd, who lives in LA, actually filmed footage of a Saturday night protest that took place on the corner of his street.  There were multiple fires and sirens blaring.  It had to have been super-scary, but he kept filming anyway.

“Last thing I saw last night was a bunch of white kids throwing bricks through the windows of local, minority-owned restaurants. Utter shower,” he shared with his 799K Twitter followers via @bigboyler.

Corner of my street 5 minutes ago. Apologies for the dodgy camera work pic.twitter.com/Y7xQ6lYFce

Co. Roscommon-born and bred O’Dowd added, “8 minutes and 46 seconds. How can it be acceptable for a man to have his KNEE on another man’s NECK for a single f***ing second? #RIPGeorgeFloyd #BlackLivesMatter.”

Sinead O’Connor, posting under her @MagdaDavitt handle, is similarly outraged, and on Sunday said she had been banned from Twitter for three days because of all her protest-related re-tweets.  She’s posted lots of them, including a message from Black Pride Ireland in support of “African Americans fighting the tyranny of their government and their corrupt police system.”

Another tweet from Sinead/Magda: “I just donated to the Official George Floyd Memorial Fund. Normally my left hand would not discuss such matters with my right hand but these people are in for an awful (and painful) long haul, legally speaking. I pray you'll donate what you can. Thanks : )”

Paul Mescal, the breakout star of the Hulu-BBC series Normal People which has captivated so many of us house-bound during the coronavirus lockdown, is doing lots of tweeting too of various videos of the riots and links to a bail fund for those who were arrested during the protests.

“Now is a time for all of us to stand together. #BlackLivesMatter,” he added.

Now is a time for us all to stand tall together. #BlackLivesMatter https://t.co/Iu1cP4GYrX

The great Co. Wicklow native singer Hozier is also feeling the pain of what’s going on in America.

“My heart breaks for the family and loved ones of George Floyd.  Feelings of admiration and solidarity toward those protesting the brutality and anti-black racism that led to his death and the deaths of countless others. Love and respect from Ireland. Beidh an bua agaibh,” he wrote on May 27.

On Sunday Hozier expressed more admiration for those taking to the streets to protest Floyd’s killing.  “The restraint and patience protestors and members of the black community are showing in the face of what we’re seeing is remarkable. I encourage anyone who can donate to bail funds or towards ending state-sanctioned murder and violence to do so,” he wrote.

My heart breaks for the family and loved ones of George Floyd. Feelings of admiration and solidarity toward those protesting the brutality and anti-black racism that led to his death and the deaths of countless others. Love and respect from Ireland. Beidh an bua agaibh ?

Barry Keoghan, star of Dunkirk and the upcoming Marvel movie The Eternals, asked his followers for donations to the NAACP’s Legal Defense and Education Fund, and also retweeted CNN coverage of Saturday’s protests in Minneapolis.

Niall Horan is never one to miss a chance to take a rap at President Trump, and the singer did so with gusto on Friday when the president called some of the Floyd protestors THUGS in his “looting starts, shooting starts” tweet that was banned by Twitter.

“THUGS ?? these people are protesting against the fact that one of YOUR animalistic white policemen kneeled on George’s windpipe and forced him to stop breathing and killed him?? THUGS???? Are you listening to yourself?” Niall tweeted to his nearly 40 million followers. The tweet garnered 687K likes.  A subsequent message from Niall, on lockdown in London, was also popular with 305K of his followers.

“Racism has been rampant for hundreds of years, it’s just that in this century people have camera phones to video it. It’s absolutely disgusting that you get mistreated because of the colour of your skin. You would think that those that are there to protect us, would protect,” he wrote…true point for sure about the instant videos shedding light on crimes that otherwise would be covered up or explained away.